Training 9/25 - 10/1 and Columbia Half Marathon Challenge

Tues- Jaera's Jaunt, 7,1 mi, 51:04, 7:12/mi; I had planned to take it a bit easy and we started out with about 1.5 mi warm-up. After warm-up , I picked up the pace a little, but didn’t seem too fast. However, everyone was staying behind me and not passing me which felt strange. Then on the first hill at Campus View Dr, the faster A group runners started to pass. After reaching the top of the hill, they weren’t too far ahead so I decided that I would try to stay with them. The next major hill in Reactor park everyone sped ahead of me on the hill. However, I slowly caught them on the longer but less steep hill going up Stadium Dr and passed all of them effortlessly. I ended up being one of the first finishers in the A group with the fastest time I’ve ever run on this course. I’m thinking that doing the Duathlon on Sunday instead of a long run probably helped me run faster.

Thurs-MKT, .7.8 mi, 1:06:04; 8:28/mi; I think a lot of people must have been tapering for the half marathon since only 4 runners went to the farthest turn around point. I kept the pace reasonable and slowed down quite a bit the last few miles since I badly needed a bathroom. We were supposed to do half mile intervals, but I think most people did not.

We left the house about 6:40 for the race which started at 8 am. I picked up my chip and then ran 3 miles since the plan was to run a total of 20 miles today. I ran the 3 miles at about a 9 min pace and arrived at the start line about 10 min before the race started. There were 268 people running the individual marathon, 75 more than last year. Temperature was a little warm at 62 F.

There were about 30 relay teams running so I figured there would be quite a few fast starters. During, the first mile a guy that runs on Tue/Thur was really surprising me with his starting pace. I think he started a little fast and eventually, I pulled ahead of him during the first 2 miles. At times my watch was saying I was running a 6 min/mi pace so I had to slow down. First mile split ended up at 6:17. I missed some of the mile markers along the way so used my GPS to get the splits.

Mile 4 included the first major hill and split was 7:19. So far no one including relay runners passed me. Mile 6 a female runner, Andrea, passed me and I passed a relay runner. I could also hear another runner, Cesar, behind me. He passed me after the water station, but I passed him back and stayed ahead of him for the next mile. Slowly, I was gaining on Andrea. Also, I noticed a guy that was stopped on the side of the trail ahead and then he started running again. Soon after that, he started walking and I passed him. He did not look well. I wondered if I should have asked if he was okay. I passed Andrea and then Cesar passed her as well. She said we looked like we were running a 5K. I told her she would probably catch us on the next hill.

Up the final hill which is about mile 12, Cesar caught up and passed me. After the top of the hill, I resumed my speed and picked up the pace. My split for mile 12 was 6:45 which seemed pretty good for the hill. After the beginning of mile 13, the sick guy caught up and stayed with me. We ran together with me pulling ahead of him once. About the last .2 miles he really picks it up and passes me. I figure he must be much faster and can’t catch him. The final mile which turned out to be 1.35 my split was 9:19. Several others GPS measured 13.3 – 13. 4 so the course may have been a little long. It was changed slightly this year as well. UPDATE: I just found out from the race director that a volunteer directed people around the quad on campus instead of straight across. This definitely would account for the extra distance.

Here’s my splits, course map, and elevation from my data recorder which is always a bit different than I get on the watch Bones in Motion Blog

Looking at my 3 mile splits, my pace looks very consistent. Considering the hilly course, I’m happy with my time which is 3:35 faster than 2004 and I think the course may have been a bit long. My time is not a PR though. I ran 1:26:28 in March on a flatter course before the Flying Pig.

I waited about 20 minutes until Hugh crossed at 1:51:02. Then I headed out for a 4 mile run which I ran at about a 10 min pace. I returned to the park and ate my post race meal and the awards ceremony was held. I placed 2nd of 15 guys in the 35 – 39 age group. The guy that beat me was quite a bit faster. Overall, I placed 10th of 268 runners and 8th overall among men. Final results should be posted at Columbia Half Marathon Challenge website 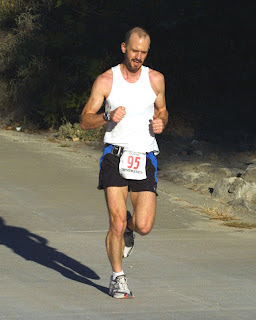 My mileage hasn’t been that great for the past several weeks, but I guess that’s okay since I ran a marathon a month ago and several races. Hopefully, it is enough to have a chance at a sub-3 since it is now taper-time. I think I’m ready for it too since I didn’t feel very strong on the hills today. 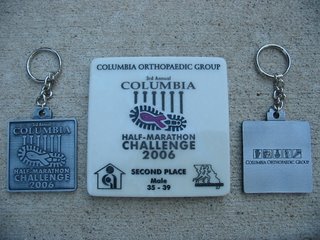 Great race. Your going to do very well in Chicago.

Hello speed-fucking racer!! So jealous of those splits!

Great times and you will do great in Chi Town