I ran a 2.3 mi warm up before signing up for the race and it was raining just a little. I ran a mile with Dan and Tom during their 20 mile run since they ran by near where the race started. I also ran another 1.2 mi after the race started while waiting for my time to start with Bill P. At this point, I felt warmed up and ready to go.

There were over 30 runners that participated (no official results yet). The course is an out and back and somewhat hilly. I always try to predict my time accurately since I don’t want to win the atrocious trophy. It's some sort of tall clock thing with a tube of red liquid and the winners have to add something to it and bring it back next year. This year I predicted to run it in 40:33, 12 seconds faster than I ran last year. Temp was 66F and it quit raining by the time the race started. Legs were feeling good even with all the miles I had already run during the week. There were 3 people that predicted faster than me. I started after a girl that predicted 41:30 and also Nancy T. had started a little ahead of her.

We can't wear watches during this race so I have no idea of pace, but I felt like I was starting out pretty fast as I tend to do if I don't know my pace. I could see the woman that started ahead of me and caught up to and passed her fairly soon. I didn't catch Nancy until near the turn around. I just hoped I could keep the pace and not be passed by her. After the turn around which is approximately 3 miles, I started catching more people and passing. The slight uphills felt difficult but I really pushed on downhill and flat to make up for it. I felt strong and felt like I was running a fast race considering I kept passing people.

In about the last half mile I see a bunch more people as we are all finishing near the same time if we predicted anywhere close to what we said we would run. At the last 0.2 mi we had to run 2 times around the long driveway around the school. I passed several on the first loop. After I completed the first loop I see Bill coming to just start his first. This pushes me since I know he is fast and really don't want him to pass me as I finish. He had predicted 37-something so started about 3 minutes after me. I make the second loop and pass my 20th person just as I reach the finish line.

My sandbagging placement was 15th out of 30-something runners and I am guessing my actual placement was probably 4th based on my time of 39:35 (a 1:10 course PR for me over last year, but not a 10K PR). I guess I was sandbagging just a little when I predicted my time since ended up passing 20 runners and was 1:10 faster than my predicted time. I really had no idea I could run under 40 on this course and was thinking I would be lucky to shave just a few seconds off of last year’s time.

This was a good "race" and felt like I did about the best I could do. It was fun to see how fast I can race and not have any clue about time, pace, and exact miles. The only feedback is how many people am I passing and this is only good if I know the runner and they predicted somewhat accurately. 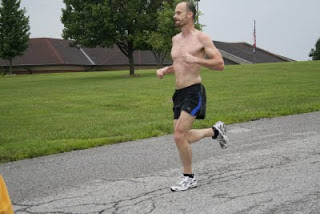 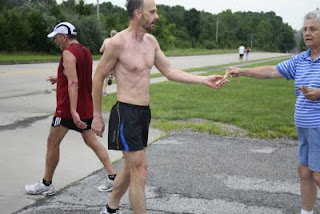