I found out about this race on Thursday from a woman that came to our morning run. She was also there Tue. but did not check into it. I found out my eye doc was a sponsor so decided to run. Also, noticed it was a certified course and they had some nice prizes. She seemed very organized so I thought it would be nice to support this one. Like I need an excuse to run a race, but sometimes it helps.

I arrived at the race 7:48 am after running 11.3 miles and paid my fee. It was held in Cherry Hill which is a nice mixed development area that has its own downtown. Tom M. and kids were there and all ran the race. I stored my shirt on Mike D.'s bike since I didn't have a car. Hugh showed up a few minutes after 8 and I then gave shirt to him to put in the car. We got started about 8:10. I am guessing 30 or fewer runners. Hugh decided to run the course with us. Since we started late, my GPS had gone back to the time and I was not ready. I had also locked it so had to unlock and get a satellite so took about 10 seconds to get it started once we took off. Mike T, Mike D, Nate, Tom H. and me were all in a group and 2 much faster guys ahead of us. I was beginning to think that I had a good chance at 8th place since all these fast guys showed up.

Within the first mile and up the first hill, I started to passed all of them. Eventually Tom H. caught back up to me and said he was not going to pass me since doesn't run faster than a 6:17 pace. My GPS had gone back to the time since I had not relocked it. I actually thought it had stopped completely and told Tom I didn't know how fast I was running. The second mile was tough. I had wished I had found some water before the race since I felt dehydrated. They had water on the course, but I didn't stop to get any since I didn't feel like I could afford to take the time. The 3rd mile, I just tried to hang on and hope we would be done soon. There were a few slight hills which seemed worse they they should. Tom stayed behind me and guided me through the finish since I was not sure quite where to turn. He had helped mark the course so he knew where to go.

I ended up finishing 19:12 with Tom right behind me. He set a new PR. The prizes for the race were really nice. First place got a 1 yr membership to Anytime Fitness. I think second was a 3 month, and 3rd place was an IPOD Shuffle. I ended up with 3rd. At first they were going to award it to second place since he already had a gym membership with Anytime, but then he said due to some high school athletic association rules, he could not accept any gifts over $25 so they went ahead and awarded to me like planned. Also, won a nice coffee travel cup in the drawing. They also had several more gym memberships and several Kastaki Pizza $25 certificates so really some nice prizes.

It turned out my GPS had kept running but was not on the pace screen. I briefly could see I ran 3.15 miles and then could not get it to shut off due to it freaking out from my sweat. By the time I shut it off, it said 3.18 and had run for 26 minutes so I adjusted my time with what the timer said. Splits were off a bit too since I probably ran 10 seconds before actually starting it so it just got tacked onto the end. Considering GPS issues, heat, lack of water, and I had run 11 miles, I guess not a bad race. I did feel like i had to work hard and having time behind me helped push me. He said he likes pacing behind someone since it is less pressure than being right ahead trying to hold them off.

This was a fun, well-organized first time event and I will definitely plan to run it next year. I originally had planned to run home which would have been 6 more miles. Since Hugh was there I convinced myself to ride with him.
Posted by Andy Emerson at 10:36 PM No comments:

This morning I got up early to drive to Jefferson City for the Phil Sayer 5K which started at 7 am. This race was sponsored by University of Missouri Extension, Fire Rescue Training Institute. My connection is I work for Extension and my department handles their publications and clothing storage and orders. Also, I know the race director and wanted to support him with this 1st annual event.

My back has been bothering (stiff and sore) me since my run on Tuesday. On Wednesday, it was hard to walk in the morning, but after stretching hamstrings, it felt much better by the end of the day. Also, the tightness and pain was all on the right side so I was kind of off balance. It was better yesterday and today even better although I could still feel it during my mile warm-up.

This was a completely flat and certified course that went on part of the Katy Trail. We started out on the road. Temp was about 50F and bit humid but overall very nice conditions. There were around 30 people either running or walking. We started and there were 2 runners that quickly developed a good lead over me. I did not know them so I didn’t know what to expect. Before the first mile, I caught one of them and just after the first mile passed the other one. My first mile split was 5:53.

I wasn’t sure how motivated I would be to continue that pace. My back was bothering me just slightly but not too bad so just tried to run in a way that it did not hurt much. This is a flat course so it was pretty easy for me to maintain my pace. The last part of the second mile was on the trail and my split was 5:56. The beginning of mile 3 was on the trail and then we went back to road. The last 0.3 were back to the trail. Mile 3 split was 5:59. I ran the last 0.13 in 0:43 (5:39 pace). Total time was 18:32. Second place was 20:02 so I developed a really good lead.

This turned out to be my 3rd fastest 5K and my fastest on a certified course. My 1st and 2nd fastest 5K was run on a course that is short so I guess technically this is my PR. Also, I felt like I could have run it faster under more ideal conditions and didn’t feel like I could put forth my best effort. Issues today were back hurt, lack of sleep, and spent 3 hours last night moving stuff from basement to garage.

I talked to the 3rd place guy after the race and he is more of a spring triathlon guy, but he is also considering the OT100 mile in November. Post race blueberry muffins (which were excellent) and bananas were served. I felt this first year race went well. Also, we got a black wicking shirt and the award with the fireman’s bobbling head is very nice. 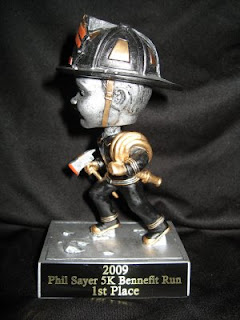 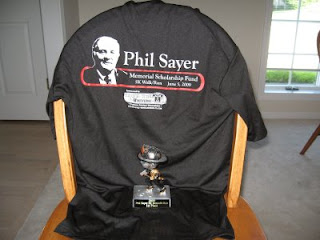 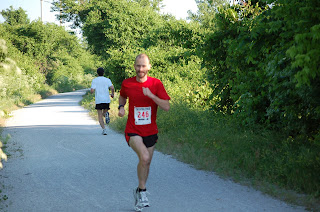 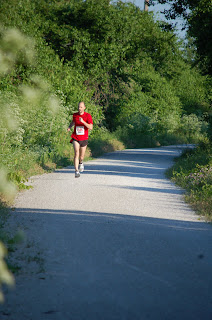 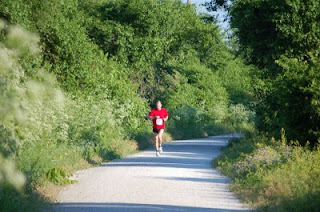