I had hoped to run the Barkley Fall Classic 50K again this year but decided to go the Mark Twain since it is closer to home and I had not run the race before. Also, I thought it would be good training for Ozark Trail 100 miler in November. It is only 2 hours 15 minutes  to drive but I decided to travel the day before since the race starts at 6 am. I opted for a hotel since I thought I might sleep better than camping in the tent or car. I was craving pizza so decided to skip the pre-race pasta meal which was 25 minutes away from where I was staying in Cuba, MO. I've never done this before but ended up consuming a medium hand-tossed with mushroom and chicken from Pizza Hut. I still felt a little hungry so went to Sonic and had a medium peanut butter fudge shake.  Not my typical pre-race meal but it worked since I had no issues during the race. Also, 3300 calories so I was well fueled for the race and didn't feel like I stuffed myself.

I slept poorly and just over 4 hours. Maybe I should  have slept in my own bed and driven since I would  have ended up with the same amount of sleep. I forgot to bring the Benadryl so didn't have that option when I woke up at 2 am and couldn't sleep. At 3:45 am I decided I might as well get up. I had a Lean Body Shake, coffee, and watermelon for breakfast. I left at 4:30 to head to the start where packet pickup opened at 5 am. I arrived shortly after 5 am so got a parking spot close to the starting line. It was very dark and then it occurred to me I didn't have a light in the car. It would likely be dark for the first few miles but I didn't worry too much about it. I figured I could just go slow and others around me would have lights. The temperature was 66F and a little humid since it had rained overnight. However, the trail seemed pretty dry. It was warmer than predicted since the cold front had not quite come through so I ran shirtless which turned out to be a good decision.

I saw Allan B. at the start line and he noticed I didn't have a light. He had a headlamp and a small flashlight which insisted that I use. It wasn't too bright but just enough to get me through the first 2 miles until it got light. The race also included a 100 miler with everyone starting together. I got up close to the front since we would be heading straight into the woods and figured I would end up being at least in the top 10. I was thankful to have the light since it was dark but only turned it on in rocky sections. I'm sure other runners thought I was nuts running without a light but it was easy to see most of the time.

The starting pace didn't seem too fast. My plan was to finish the first loop in around 4:20 or 10:30 pace. The course is the Berryman 50 mile in reverse and I have run it close to 9 hours the past 2 years. The reverse course is more elevation gain according to my GPS so maybe a little more difficult. Allowing for my second loop slowdown I thought 4:20 was reasonable even though Ultrasignup predicted my time at 9:26. The first 10 miles were interesting since I was running with about 10 people in the lead pack. The first 8 miles were between 10:30 - 11:45 pace (averaged 11 min) so seemed quite reasonable . At the same time I am wondering why am I still with them since it felt easy. I kept thinking someone is going to take off soon since this has never happened. Usually, someone takes off right away and I don't see the leaders.

After the mile 9 aid station, I took off before most of the group and was right behind a couple of the leaders for a very short while and then all of a sudden one of them takes off at a blazing pace and a few others followed. They were quickly out of sight. A couple guys stayed behind me and I set the pace for the second pack for awhile and we sped up too. Eventually I was passed by one of the guys but I completed the remaining 17 miles at 10:17 pace. The loop was a little over 25 miles (had about 25.5 GPS) and I came in at 4:27, refilled my supplies and was off at 4:30.

Nutrition was pretty simple. I used mostly Huma gels and a few other brands I don't like and won't buy again now that I've experienced Huma. I consumed 4 gels per loop and a few pieces of banana. Also, used 2 servings per loop of Sword. The second loop I consumed more banana and a tiny avocado wrap which I considered lunch. It worked quite well and I had very few hunger issues.

Energy was steady the second loop but hamstrings were feeling sore and getting more difficult to run up hills but I still ran up them as much as I could although slowly which is faster than walking for me. Even though I had slowed I was surprised I hadn't seen anyone. Coming into the 40 mile aid station I see the guy I had passed earlier leaving. I eventually caught him walking and he started running behind me once I passed. We ran together until the next hill and then I went ahead. 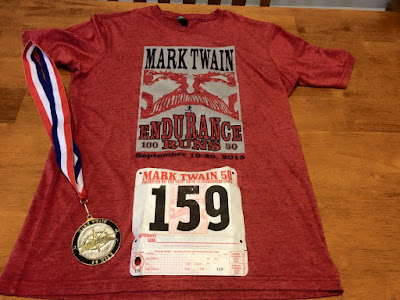 Posted by Andy Emerson at 8:25 PM No comments:

Heart of America was my first marathon and my longest running race streak, having now run it 12 times.  I've been training for a 100 miler in November and it is a bit difficult to stay focused and train properly for both. However, I need other race distractions before the 100 miler or I will start to lose interest. Training for a 100 miler so far out in the year is a bit stressful and I prefer to run one earlier in the year.   Training for the marathon went okay and I managed to do several of the Long Run Lunatic training runs while still doing some trail runs and a trail 50K in July. The biggest distraction was 2 weeks before the race I was severely bitten by chiggers which made focusing on running very difficult. I had to get a prescription steroid cream to heal faster and it still itches at times. I didn't run for 5 days since running made the bites itch worse and my feet were swollen for a few days. Instead of feeling refreshed for the marathon after 5 days of no running, I felt more beaten down. Then I ended up running more than I would have the week before and am still not sure if that was the right thing to do.

The weather turned out cloudy with a start temperature of 74 with 82% humidity at 6 am according to Accuweather. It never felt like it warmed up too much since the sun stayed under clouds. I woke up at 4:30 am and we left at 5:30 am leaving 1 car downtown. Hugh also signed up for the race the day before. He wasn't too crazy about the temperature which was the warmest starting temperature in the 12 years I have run this race.

I'm not sure how many starters but there were 162 finishers down 17 from last year and I am sure there were some drops. I had a plan to pace a 3:10 and depending on how I felt I might run faster or slower. I spotted Andrew and his sister than came in from KC as soon as I stepped out of the car. We had just a few minutes before the race started. I never arrive too early since this is a small event, plenty of parking, several bathroom options, and I only live 2 miles away. I started off with a 10 oz bottle of water since the first water station didn't come until 3.5 miles and I didn't want to get too far behind with the warmer temperature.

So we are off and around the corner the first mile is downhill and unfortunately this is part of the course we have to repeat later when we come back in. After the first 3.5 miles, the course is a 17 mile loop and then we come back on those 3.5 miles plus some additional miles to finish downtown. I ran the first mile in 6:46 which was a few seconds faster than planned but okay since downhill. The second mile which is uphill I was right on pace. Andrew was close behind. Around mile 4, Alex, and 18 year old that I know running his first marathon settles in beside me and we run the same pace until around 8 miles he went ahead.

Then we hit the gravel road and Andrew catches up to me on the downhill. We talk a little but it was a little difficult to talk much and keep the pace. Usually, I can talk just fine in a marathon at this point but it was taking a bit more to focus on my pace than usual and the gravel didn't help. It was nice to get to the trail that runs along the river and enjoy the flat before the big Easley Hill.

I ran 8:16 up the portion that included Easley which turned out to be my slowest mile. My overall time was around 1:36 at the halfway point. I was able to get back on pace somewhat running a 7:25 in mile 14 and 7:12 in mile 15. I passed 3 runners in the last second but one was in the woods so I didn't realize that I had passed him. Around mile 16, it was getting more difficult to keep the pace but Still managed 7:25 average for the next 9 miles.

At this point I was checking behind and didn't see any runners. I had a hill to climb as well. I could have tried harder but ran the last 2 miles in 8:03 and 8:11. My overall time was 3:16:13, only 2:29 slower than last year. Many of my splits were very close to last year up until the last 2 miles. They were my slowest last 2 miles in 4 years.

I felt an extreme sense of tiredness after the race and felt like I wanted to lie down and go to sleep. I waited for Hugh to finish while I ate 2 Hot Box cookies and 2 small Gatorades and still felt wiped out. After he finished we went to the after party and awards at Shakespeare's. I ate 2 pieces of pizza which I really didn't even want that much. I placed 2nd in my age group and 4th overall out of 162 finishers. This is my highest placing in the 12 years I have run this race. No one broke 3 hours this year. The winning time was 3:06 and I know several runners that struggled to finish. 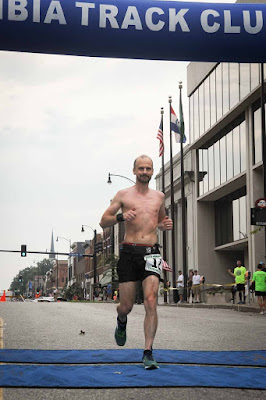 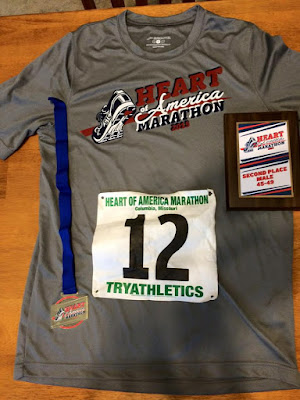 Posted by Andy Emerson at 4:29 PM No comments: