I drove up on Friday, the day before the race. Due to road construction, the drive was much longer than expected. I waited until Rockford, IL to stop for lunch at 3 pm since they have a Roly Poly. I was pretty hungry and didn't pay close enough attention to where I parked so took a few minutes to find the car when I was ready to leave. Packet pickup was from 3 - 6 pm and I made it by 5:10. The Crossroads Motel where I stayed was only a 10 minute drive. The wifi was slow and I wanted to check email so I decided to go to Culver's. I wasn't really hungry for dinner so just had a concrete. Then went back to the room, got things ready, and went to bed so I could get at least 6 hours sleep.

I woked up a few minutes early at 3:45 am and was ready to leave by 5:10. Temperature was around 64F I think and humid. I still got a good parking spot and had to pick up my timing chip. The race started promptly at 6 am with all the runners from the 100K, 100 mi, and 100 mi relay. There was also a 50K and 38 mi run that started later in the day. Everything felt good and pain free at the start. I didn't follow an official training plan for very long. I didn't sign up for the race until April and ran 2-50Ks, 2-100Ks, and a 50 miler 2 weeks ago. I had some good mileage from the beginning of the year and with the races it seems like it would be a good buildup to a 100 miler. If I wanted to run a 100 miler this year, June was the time to do it. My mileage in May was over 100 less than April so I guess that was my taper. I was probably the least stressed about this 100 miler as any I have run. Also, I thought this might be a good time for my last 100 miler since it was also my first.

I started off at a very reasonable 10 min pace for the first section which is pretty easy running in the grass. I walked all of the hills. Before the first drop bag at Emma Carlin the guy I ran with 4 years ago from Columbia recognized me. He was running the relay then and had run the 100 mile last year and was attempting again. We ended up running together all the way to the 50K and a little after. I arrived at the 14 mile drop bag at 8:30 am so 30 min ahead of schedule. I picked up my hat since we were heading into the open meadow and it was getting warmer.

Later the sky became cloudy and shortly after 11 am it began to rain which was perfect since we were running in the open with rarely any tree cover during this section. I made to the Scuppernong 50K turnaround at 11:32 am with several other runners so 28 min early. I was doing pretty good other than my shoes were rubbing my heels but just a minor annoyance at this point. Also, since it was raining I decided to get rid of my shirt and hat since I especially don't like running with a wet shirt. Also, I had to make a quick stop to the bathroom. I eventually caught back up to Josh and another guy I had been running with earlier.

I arrived back at Emma Carlin 47 miles at 2:42 pm, still ahead of schedule but feeling a bit dehydrated. At some point I had run ahead of Josh and didn't see him again until later when I was going back out from the first 100K. The next 8 mile section to the Bluff Rd station at 55 mi was tougher and my pace slowed some. Thankfully, the last section back to Nordic 100K and where we started is easier so I was able to pull myself together and go a little faster. It did cross my mind that it would be nice to be done if I wanted to stop. Since I was still running and things were going pretty well, I knew I would need to continue. I arrived at Nordic at 5:58 pm so 32 min ahead of schedule and 44 minutes earlier than 6 years ago.

I picked up my light and decided to remove my shoes since they were squishing. I put Body Glide on my feet and new socks which helped make the shoes less squishy. Also, my heels felt better. They were red but not blistered. I did have a small blister on my left little toe which popped at some point and didn't cause any issues. I'm not really remembering how I felt from Nordic out to Bluff in the next 7.5 miles but must not have been so great since my pace was 14:23/mi for this section. I may have been a little dehydrated since I remember drinking some extra water at this aid station which I had done several times as needed. Drinking to thirst as some suggest just doesn't work for me during a 100 miler. I drink extra and still get a little dehydrated sometimes. If I wasn't peeing I would drink more until I did and then evaluate if I needed to drink even more based on color.

When I ran this in 2010, I didn't get to see any of the next section in the light since it was already dark. It was light almost all the way to Hwy 12 so I got to see a lot of it and there were beautiful lakes I didn't get to see before. Also, the sunset was very pretty and I could see it while running this section. My pace improved to 13:40 for the section to Hwy 12. I had to turn on my light on the way there when I was on the single track sections in the woods. I was still seeing runners, some from the relay, 38 mile fun run, and eventually some of the first 100 milers coming back. I had started out in 42 place eventually working my way up to 9th when I arrived at Hwy 12 at 9:23 pm but only 7 min ahead of my estimated time.

I was and I wasn't looking forward to the next section to Rice Lake turnaround. It is the toughest section (technical and hills), 4.5 miles out and then 4.5 miles back to Hwy 12. My pace was 15:48 out and 15:07 back. I was back by 11:42 and now 12 min behind my estimated time. Understandably slow for this section at this point in the race. I knew I could hopefully pick up the pace once I got back to Bluff but I was pretty worn down by this section. It was difficult to tell sometimes what runners were running which race. I knew I had passed a few 100 milers and been passed by 1.

Some other runners came in behind me at Bluff. I had 7.5 miles to go to the finish. I thought I was keeping a pretty good pace and then at some point going down one of the hills, they blow right past me and run part way up the next hill. One of them was breathing really hard. I'm thinking this is crazy and let them go. A few miles later, I see them again and catch them. I have no problem passing them and get so far ahead I can no longer see them. I really don't like getting passed so close to the end so I was pleased I was able to pass them. Maybe I'm a little competitive and I thought at least a top 10 finish would be a good goal for me. I didn't think I would be able to pass them since they looked so strong when they passed me earlier. Around 2.5 miles from the end, I am a little confused as to which way to go since I didn't see the arrow or any glow sticks. I look behind me and I don't see anyone to wait and ask. I ended up running less than a quarter mile before thinking it didn't seem right so turned around. Then I saw the arrow was there (right next to the ground in the grass so hard to see) but no glow sticks. I caught up to the two 100 miler runners and a pacer again and confidently passed them to the point they were out of sight again. I'm thinking maybe a sub-21 finish is still possible.

I kept thinking I had to be close to the end and seemed like a long 2 miles but eventually I could see the timing clock and finished in 20 hr 56 min and 59 sec.  The runners behind me arrived 7 min later.
I placed 8th overall - 225 starters and 133 finishers. 4th in my age group 40 - 49.  In 2010 there were 155 starters and only 51 finishers and I placed 4th. The growth was good since I was often running near others but it was never too crowded. I felt it went very well and they had me at 12:29 overall pace. Pace during the last section with my error was 12:14 so not a bad pace to finish.

I wasn't able to eat anything at the end. I tried a little ginger ale but had to dump the rest. I stayed around for about 15 minutes and left to go back to my room to shower.  I managed to get down a protein shake and part of an Ice. I had hoped to sleep to 10:30 am but woke up at 8:30 so got ready and headed back over to retrieve the last drop bag and hopefully eat breakfast. The breakfast was catered and they had pancakes, 2 kinds of eggs, sausage, bacon, cinnamon rolls, orange juice, and coffee. I had everything except coffee. I made it home safely without feeling tired. I nearly drove straight through without stopping until about 45 min from home to fill up with gas and go to the bathroom. Appetite still wasn't normal so I skipped lunch.

Kettle is a great 100 miler, well-organized, excellent aid stations, volunteers, and good crowd support. It is not as difficult as some but still has plenty of challenges with only a 59% finishing rate this year and some years lower. The option to drop to the 100K is good too. The temperature in June can be a challenge but could have been much worse on this course in the open if it hadn't rained for awhile. I'm guessing it stayed under 80F. Accuweather says it was 77F. I'm not sure I'm ready to tackle the 100 mile again here (or anywhere - ask me in 6-12 months) but I would be willing to run the 100K. 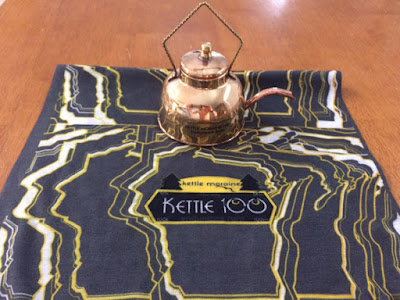 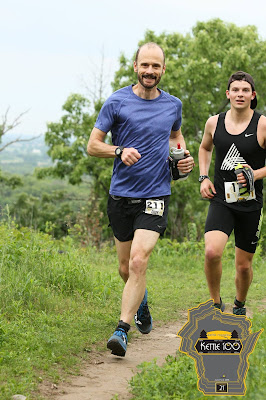 Posted by Andy Emerson at 3:28 PM No comments: