This year we arrived early so that we could run the 3.1 mile loop completely flat course once as a warm up. We ran at about a 9 min/mile pace and ended up at the start line about 5 minutes before the race started. Originally, I was thinking about running the 5K since I would have a better chance at placing in the top 3 in my age group. I don’t get many opportunities to run a 10K and I thought that I might have a good chance of setting a 10K PR again this year. I ended up registering for the 10K and Hugh ran the 5K.

The 10K start line was behind the 5Kstart line so I quickly caught up to the slower 5K runners so it was a bit crowded at first. The 10K course was 2 laps around the course. My goal was to run a 6:22/pace, but after the first mile I decided that maybe 6:30 was more realistic. I felt good the first loop and my splits were:

The second loop I maintained my pace and no one passed me. I did seem to be gaining a bit on the runner in front of me, but never passed him. At 6 miles, I picked up the pace a little for the last 0.2 miles.

My HR averaged 163 and I decided to run to cool down. At first I thought I would just run out a little, but I felt so good I decided to do the entire 3.1 mile loop again.

We didn’t win any of the door prizes which were provided by Walmart, Target, Coca-Cola Bottling Company, All N#1 Sports, and Larsigns Engraving. Chez Monet Bakery donated the award pies.

This was my first Cross Country Xtreme and it was a fun event. Many people dressed in costume for the race. We ran through over creeks, in muddy creeks trying to dodge mud and trees, sawdust/manure uphill, and over big round hay bales. Along the way, we looked for 4 different buckets of wrist bands. Each bucket had a different color and we could take one from each bucket. We completed the course twice. Once we finished the race we received a raffle ticket and an extra ticket for each of the different color wrist bands. I found 3 wristbands and Hugh found all 4 wristbands.

There were also prizes for top 3 in each age group, costume, most muddy, most bloody. I would guess that Hugh came close to winning the most bloody with a scrape on his leg, but another guy had been cut by barbed wire. Hugh’s leg really wasn’t too bad there was a bit of blood. I just had a few minor scratches. Hugh wore overalls, and his nose from the flying pig. I think he placed 8th in the costume contest and was awarded a rubber chicken. I placed 3rd in my age group (30-39) which was a surprise since I stopped several times. The award was made from items you might find along the course. 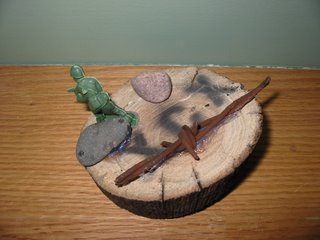 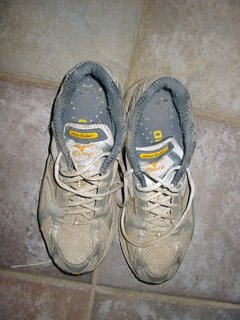 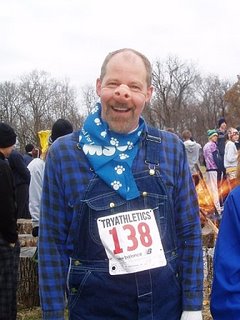 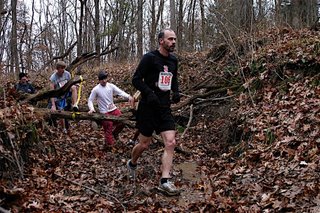 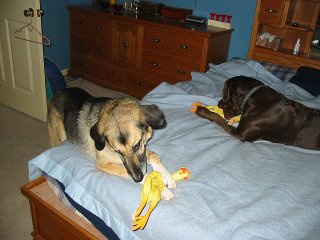 Race results were burned in the bon-fire!

I woke up and legs felt fine from yesterday so I planned 13.5 miles. My HR averaged only 126 on this run. I counted at least 10 good hills on this course and felt good.

After this run we took our fall picture on the trail. 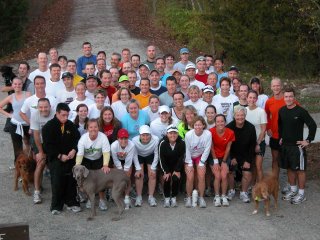 I enjoy running this course which is the hilliest 5K that I run. I slept well and was feeling ready to race when I woke up. Temperature was 32F and sunny so I decided to wear a long-sleeve wicking shirt and covered it with a cotton shirt, wore gloves and headband as well. I was a bit concerned I might be overdressed by the time the race started, but with the wind it felt just right.

Hugh and I warmed up for about a mile right before the race which started at 8 am. There were 91 runners which were down from last year. I lined up in front and when we took off it seemed like several people were starting really fast. I held back and still passed a few people the first half mile and a couple more in the latter half. First mile split was 6:14 and I felt good.

I felt good on the 3rd mile, but there were still hills so I waited until we were done with the hills to pick up the pace. I could see a couple runners ahead of me but it wasn’t likely that I was going to catch them. Third mile split was 6:26 and then I could see the clock. Last year I ran the race in 19:55 and I was hoping to at least be sub-20. It looked like it was possible so I pushed and ran the last 0.1 in 37 sec. Total time was 19:54. Not a PR for the course, but still not a bad race. I felt like I could have kept running for a few more miles. My avg HR was 163 which seemed a little low for a hilly 5K.

For prizes we were able to pick from several nice options. Hugh picked gloves and I picked socks. Race Results are posted at Cranberry Crawl

The plan was to run 8 miles today. Before I set out to run, I decided I would run 10. The temps were in the 50s during this run and I felt so good I decided to go 12 miles. This is a very rolling course with some good hills and I was enjoying it so much I decided to run to the stop sign in Prathersville and turn around so I ended up going 13.5 miles. My heart rate only averaged 133 on this hilly course so definitely an easy run for me. It felt good to run some long easy miles. I’m looking forward to doing more of these runs.

This race started at 1:45 pm in Stephen’s Park. The grass course was 3 times around with one straw bale jump for each lap. I competed with a team called the Lumberjacks. We had 6 people so the top 5 scored. I was not able to keep up with my usual competition, but didn’t really expect to do so today. I didn’t have any expectations for this race other than to finish. I ended up finishing 2nd of our team members. There were about 55 runners and I placed 26th overall. Our team placed 4th of the 5 men’s teams.

This competition attracted some great runners from the area so it was not a good day to slack, but I just wasn’t ready to push that hard yet. I am looking forward to next week since it can’t be worse than how I’ve felt most of this week. I’ve been tired and down which is probably my body telling me not to push yet. Even though my legs feel good and I have the desire to run, I’m still in recovery mode.