I ran this 50 miler twice before and most recently 3 years ago. It has always been a challenge either with mud, rain, heat or trees down. The 2 times I ran the marathon the conditions were pretty good and if it did get warm I didn't have to deal with it as long.  This year the biggest obstacle was going to be the heat since the trail was dry and in great shape.

I drove down with Jeff and David on Friday and we met Shawn and Susan at the campsite. We all fixed our dinners and headed to bed around 10 pm. I kept the rain cover off of the tent and the sleeping temperature was perfect. I woke up several times but overall slept pretty well.

The 50 miler started at 6:30 am so we all got up at 5 am to get ready. This year the marathon did not start until later at 8 am so there was less competition to use the bathrooms. It was already in the 60s at 6:30 am (guessing about 65) and it was warm enough to run without a shirt. We were allowed a drop bag at the start and Brazil Creek at 16 miles. Due to the heat I doubted I would be eating much at the aid stations so planned to fuel on my own fat, gels, Succeed, and Nuun. The plan was to alternate between Nuun (zero calories) and Succeed, take a gel every hour, plus electrolyte caps as needed.  I dislike gels so rather than torture myself with the same kind I tried out some of the new peanut butter GU, and also used some Accel and Hammer Gels.  The peanut butter GU was not too bad, but it is still gel.

The trail had been reworked since last year so we no longer had to run a short out and back on the road at the beginning to make up the difference for 50 miles. The loop is now 25.4 miles so we headed straight into the woods at the start which made it difficult to get into the correct position for the pace that I wanted to run. Most runners seem to start out too fast so I started out near the middle of the pack. I am guessing around 60 runners started the 50 miler. Between the 2 distances there is a limit of 150 and there were several no-shows.

Due to the heat I had planned to run conservatively for the first loop. There is also the theory to get as much running done while it is cooler, but at 65F it was already too warm for me. My first mile was 10:45. I then passed about 3 runners and ended up behind 6 runners that were running a decent pace. I stayed behind them until about after the first aid station at 5 miles after it seemed like they were slowing.

Not a whole lot happened the first loop. I tripped over a few things, but never fell. I threw my water bottle trying to regain my balance at one point. I was running behind a guy (John) and switching back and forth until about mile 10 and then didn't see anyone until I came up behind John and 2 other runners (one was Stuart) at mile 22. I passed all 3 and then John passed me again. I stayed behind him and he said to let him know if I needed around. I told him I would try to stay with him until the end of the first loop and we ended up finishing the first loop together. I felt good at the end of the first loop. I was hoping for no more than 4.5 hours on the first loop and ended up with 4 hr 34 min.

Steve was there to pace me for my second loop which I had really been looking forward to since it was kind of lonely for most of the first loop. Karen and Andy P. were there to cheer us on and Karen filled my bottle for me while I retrieved gels from my drop bag. We took off and passed a few runners probably within the first 8 miles. The temperature got up to 90F, but there was cloud cover at times and it didn't feel humid. However, the heat made running very difficult and pretty much killed my appetite for food. I stuck to the one gel on the hour every hour for the entire run. Aid stations were 3 - 6 miles apart and one bottle wasn't quite enough at times so I drank a little extra while at some of the stations. Also, got ice in my bottle whenever I could. I felt pretty good until about mile 40 when it seemed like it was getting warmer and my heart rate was climbing.

We had not seen any runners in a long time which was kind of strange not to pass anyone or have anyone catch up. I heard several had dropped out. We did see 1 marathoner that was still out on the course at mile 41. I had to start walking a few hills at times since my heart rate felt like it was getting high probably due to dehydration. Also, my right ear felt a little plugged for awhile and felt a little dizzy but otherwise not too bad. After we would walk up a hill for awhile, I was ready to try running again. Steve stuck right behind me as my pacer and it helped to know he was behind me. He was also feeling the effects of the heat and this was also his longest run ever at 25.4 miles for the loop.

We were pretty quiet those last 10 miles. It seemed like it took longer than it should have to reach the last 2 aid stations and then the last 2.5 miles seemed to take forever even though it really wasn't that long.  We did walk the hills so that took some extra time.

I crossed the finish in 9 hr, 39 min, 44 seconds (11:25 pace overall), so 5 hr and 5 min for the second loop and I was hoping for around 5 hours. After I crossed the finish, Victoria (co-race director) walked over to me and handed me a plaque for the 1st place Masters which was a shock to me since I've never won anything at this race.  They told me I ended up 4th overall which was also a shock since I probably only passed about 10 runners and thought there were a few more ahead of me.  I was quite happy with my finish and how I felt considering the heat.   A slowdown of 30 minutes didn't seem too bad for 25 miles.

After the finish, I was drinking a bottle of water and at the campsite and felt incredibly nauseous but didn't puke.  I attempted to change clothes in the car and my upper quads kept wanting to cramp.  Also, noticed I was covered in salt from front to my entire back, my head, and my arms.  I got down a bottle of chocolate milk and about 1.5 hours later I tried eating a little (plain brat no bun and a little coleslaw) and ate a little more again (plain hamburger and macaroni salad) later but just didn't have much of an appetite.  David finished not too long after me, and then Shawn and Jeff.  Everyone looked good and it was a good day to just say you had survived the heat and finished.  Definitely not a day for PRs unless it was your first 50 which was the case for David.

On the way home, Jeff and I stopped at Subway and I ate again.  We got home and Hugh had some food for me from the graduation party and I ate yet again.  It took awhile, but my appetite came back since I ate 4 times between finishing and going to bed.  I am guessing I only consumed about 1600 calories during the run which is about 170/hr and actually felt better than when I try to eat more.

After finishing I noticed my left ankle was a little sore.  Yesterday it was really sore and still sore today, but maybe a little better but looks swollen.  I didn't turn it during the run and just feels like it used to feel after I would run a road marathon.  I guess it is time to do the PT exercises again to strengthen it. 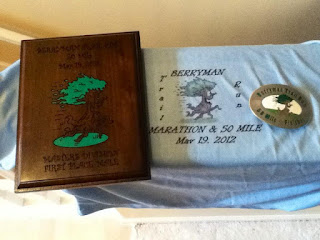 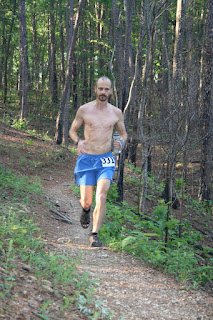 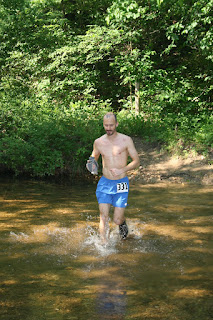 Posted by Andy Emerson at 4:51 PM No comments: