Life got a little stressful in July so haven't updated this blog in a few months. Here's my attempt to catch up on the major races I've run.

I finished my 14th consecutive Heart America Marathon on September 4. It was likely the second warmest and also humid. I ran 3:14:00, placed 3rd overall, 1st 45 - 49 .age group I did not have great expectations this year.  The course changed and was different at the beginning and the end. I think the end makes it a little easier since we now run on the trail rather than up Providence, Stadium, College, and Downtown. It finished in Reactor Park but there is a significant hill from the trail on Stadium to Carrie Francke Dr.

When I arrived at the start I realized I had forgotten my GPS. I was a little relieved and didn't worry about it. Instead I used the stop watch on my FitBit. I paced with Sankalp for first 12 miles and felt like I had a good feel for pace. I ran the 1st half 1:38:40, 2nd half 1:35:20 which was an unexpected surprise. At one point running with 8th, 9th, and 10th so moved up. Second wasn't too far ahead. First ran 3:02 and both 1st and 2nd were 22 years old which made me feel good. I certainly didn't feel 22 during this race but considering I didn't marathon train it went pretty well. 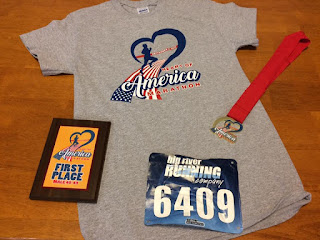 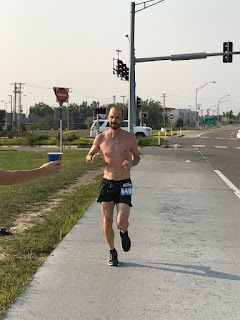 On October 7 I ran Rock Bridge Revenge, my 6th time running the 50k. The trail was wet but not bad the first loop. The second loop, it rained and it got quite muddy in places. I think I was about 2:41 the first loop and 2:45 the second but the first loop is a little longer. I ran with a friend for 27 of the miles and then he dropped back. If he hadn't been behind me, I would have likely walked more. I placed 5th overall. I think about 50 started and a few dropped.

I hate to complain but I didn't feel good the entire race. My whole body felt achy and I hurt which had been the norm for awhile. I had a headache most of the run which disappeared after. I felt kind of flu-like. I had been running very little before the race. My training consisted mostly of Heart of America and pacing Steve at Superior 100 for 54 miles.

The race was my only run during the week. I ran 25, 30, and 37 in the previous weeks. I had a 2 hour massage on Tuesday before the race and that helped loosen me up a bit as my body was very tight. My upper back seized up a bit the morning of the race. A hot shower helped so it was not an issue during the race. I wondered if my body is telling me to stop running. Someone suggested magnesium. I found early signs of magnesium deficiency include loss of appetite, nausea, vomiting, fatigue, and weakness. I had all those except vomiting.  I also read stress depletes magnesium levels and I've had no shortage of stress this year. I ended up going on a magnesium supplement and am happy to say that I think I am feeling much better. I am also eating a few foods that are a good source. 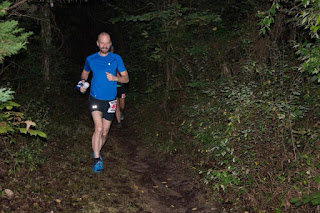 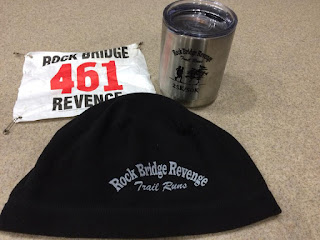 I had doubts about whether I should run this race but I started to feel better after the magnesium supplement. I was had a free CBC, testosterone and PSA test at Epoch and everything was okay. Unfortunately, they did not test for magnesium so don't know for sure if that was the issue. I decided to go run the race and have fun. I left on Friday, October 20 and the race started at 6:40 am on Saturday morning. A good explanation of the race is on Ultrasignup.

I can't say that I actually trained this time. However, I do well in this format with the breaks since I can run it fast enough to have 10 - 12 min after trail course and 10 - 17 min on the road. Off course you don't want to run it too fast or you won't last so my splits are always run easy. If it gets more and more difficult, you will run into trouble finishing within the hour. There were 14 people on the last road loop and 4 of us dropped at 100 miles. I was certainly happy to stop but one always wonders how far you can go if you run until you time out.

The temps were pretty warm when we started and it got up to 78 and turned cloudy so not a bad day. At night, it maybe got into the 50s and some wind. Perfect conditions for running. This year I tried something different for food and took a lot more sugar. Last year I dropped at 92 since I had been feeling nauseous for a few loops and it wasn't getting better. This year I used no gels although I took them with me, I never had a desire to consume them.  Instead I had fruit, dates, pecan pie, pumpkin pie, pin wheels, soup and Sword drink. I think next time I will had real Coke. I had several Coke Zero Sugar for the caffeine boost but I should have used real Coke for the easy calories.

The race ended up going on for 59 hours, 245 miles! More details on the Facebook page. 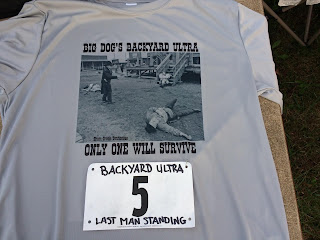 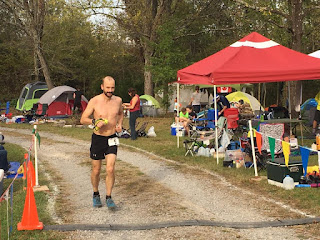 The week after Backyard Ultra, I ran the F*L*A*T*S Trail Half Marathon. This was the 7th year for the race and my first year running it. I had to drive 90 miles north to Kirksville, MO and needed to arrive by 7:15 am to take a bus to the start since the race is point to point. I arrived about 7:05 and ended up being the last person to get on the first bus. Once we arrived at the start we were able to hang out in a boat rental store for about an hour and stay warm until the race started at 8:30 am. They took bags with our stuff we removed before the race back to the start. Temp was 33F. I wore 2 long sleeve shirts, one being my zip pullover that I could pull over my hands. I wore nothing on my head and many people had a hat and gloves. I was slightly too warm but not bad most of the time if in the wind.

The race started on the road for 1.5 miles so plenty of time to spread out. Once I secured my position I stayed about the same the entire race other than getting passed by a couple guys after the first half, passing one back and then passing another. The trail was marked every half mile and lots of aid stations but I carried my 20 ounce handheld filled with Sword and drank about 2/3. After running 100 miles last weekend, this was my first time running. My legs were definitely still tired but overall ran very well other than often didn't have much energy to power up the hills. The downhills and flats though felt pretty good. Trail was in good shape and very firm.

I felt like I paced very well. The first 1.5 was road so faster. The slower miles had hills.

Post race was one of the best parties I've experienced. They had coffee, hot chocolate, gatorade, beer, fruit, pizza, cookies and I am sure I missed something. It was held in the old ski lodge (back when it was cold enough to have skiing in Kirksville). I skied once there when I was a student. There was also a live band and they had students from the Osteopathy school stretching the runners. I didn't have to wait very long since I finished so early and it was a good stretch. They also had 50% off shoes from somewhere and clearance clothing.

In our race bags we got a race mug, Kashi bar, head wrap (seems like many are giving these out the past 2 years). At the end we got a finisher's shirt. There were also race photos but most have not been posted yet. I spotted myself in one of the starting photos, near bottom right with blue shoes, wearing black, and my race number on my shorts. Definitely hoping I can do this race again. When I signed up it was only $40 and well worth it. 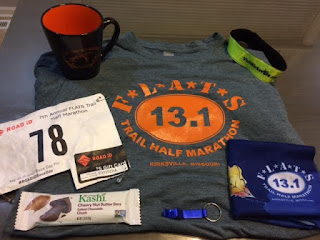 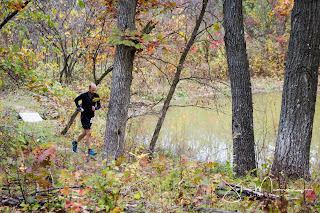 Posted by Andy Emerson at 9:19 PM No comments: