We arrived about 8 am to pick up our shirt and timing chip. I had ordered a small but they were out so I took the last medium. Hugh ordered a medium and took a large since that was the only size left. We could have gotten on a list for the correct size, but did not. There was not enough time to run the course as a warmup. I used the bathroom and decided to skip the warmup. I had time to run a mile but did not. The 10K started about 5 minutes before the 5K which was good since there was a huge crowd of over 700 runners and walkers. I started off with Katie and had hoped to run around 18:30. The first mile went okay, but a little slower than I had hoped at 6:02. I passed a couple guys and one guy passed me that looked to be in my age group. II was feeling the urge to use the bathroom and I definitely should have done so. I had to slow down for the last 2 miles. The second mile was 6:18. I did pass one guy near the finish and almost caught up to the guy in my age group. Last mile was 6:23 and last 0.1 was 33 seconds. Overall 19:15, 16th place of 397, and 3rd of 33 in the 40 - 49 age group. Not as fast as I had hoped, but not much I could do. I had to run to the bathroom as soon as I finished. I decided not to do a cool down and will go for a longer run tomorrow. I won a Chez Monet Pecan pie in the drawing. I picked the last pecan pie. Hugh was 4th in his age group in the 5K so just missed getting a medal this year.  Results posted here. 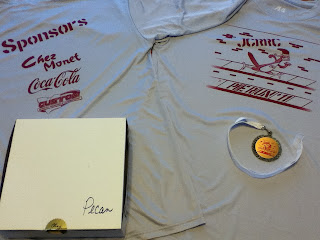 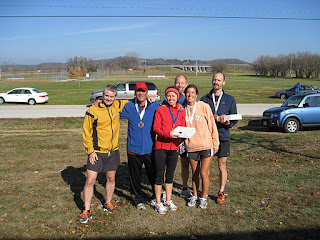 Posted by Andy Emerson at 2:36 PM No comments:

The Cranberry Crawl is a race that benefits the Food Bank for Central and Northeast Missouri and starts at the Food Bank..   I warmed up with Hugh for about 1.5 miles and then we found the bathroom before the start.  Temperature was 47 F so I wore a long sleeved shirt.  I felt like I had a good race in me so I hoped to go out at a sub-6 minute mile.  Started off with Dan E. and Tony R. was right behind us.  I felt like maybe I was running too hard for the hilly course.  The first mile was 5:47 and I felt better.  There was also a 10K that ran 2 loops and the leaders of the 10K were ahead of us.   We ran just behind the first female runner for about 1.5 miles and then passed her.  Dan would pass me on the uphills and I pass him on the downhills and then we ran side by side. There wasn't much chit chat since we were working hard.  2 mile split was 6:10.  At about 2.3 miles, Tony passes me and I work to keep up with him.  I passed him up the last hill, but he passed me back.  My 3 mile split was 6:06.  I had a kick at the end but couldn't quite catch him.  Overall time was 18:32 and Tony was 18:30.  Dan came in after me.   It felt like an actual race and no doubt we all helped each other to run our best today.

Overall I placed 7th of 92 and 2nd in age group.  Hugh placed 11th overall and 1st in age group.  I ran the course again with Dan for a cool down.  Then we went inside to get some food and get ready for the awards.  For the prizes we were allowed to pick from an assortment on a table.  Hugh and I both picked the Body Glide.  The last time I ran the 5K in this race was in 2008.  Today was a 17 second improvement.

The course is shaped like a turkey.  Here is the map and course elevation profile. 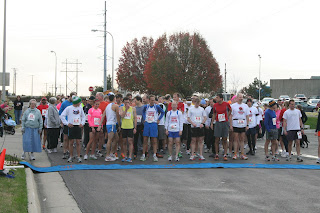 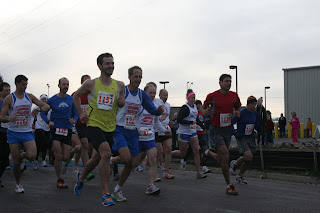 Posted by Andy Emerson at 9:24 PM No comments:

I have started a new blog called Primal Nutrition and Fitness.  I would like to explore this as a long term plan to stay healthy and feel good.  I will likely keep running some endurance races and post those here.  Even though I am not sure all this running is entirely compatible with Primal Fitness, there are some modifications that I can make.  I don't want the running to overtake my life and I think focusing on Primal Nutrition and Fitness will be a healthy balance.  If you are interested or think I am crazy, check out the blog.
Posted by Andy Emerson at 5:04 PM 1 comment: