I really enjoy the summer version of this race so signed up for it the 3rd year in a row.  I've run the spring version 3 times, but have enjoyed the summer version the most.  I prefer running in the heat to the cold and a there is a greater chance of the trail being dry in the summer and no snow or ice or mud to contend with.  Also, figured this race would be a chance to get a 30+ mile run before Leadville 100 next month.  Unlike last year my motivation has been pretty good but energy has not been good and have felt drained much of the time.  Taking care of our elderly dog with many nights of interrupted sleep the past 2 months had really began to wear me down.  Stress at work and stress with our house being in chaos due to an unfinished flooring project hasn't helped either.   We sadly said goodbye to our dog Rusty a week ago. I have begun to feel human again since I am getting uninterrupted sleep.  At this point last year I had already run 6 ultras and 1 marathon.  This year I had run only 2 fifty milers so shouldn't have been as worn down from long races with my last 50 miler being in May.

Hugh rode with me to Kansas City the morning of the race.   We left a little later than I had planned at 5:15 am so had to make up some time but managed to arrive around 7:15 am at a church parking lot where they shuttled us to the race.  Last year we were allowed to park on the race site so this was a new thing.  I had everything ready and in a bag so only needed to pick up my race packet and use the bathroom.  My packet included a shirt, glass, and a 50K Trail Nerds sticker.  I brought 2 small coolers for my 3 bottles and had filled them with Succeed and ice.  I also packed 2 Powerade Zeros to drink after then end of the first 2 loops extra hydration.  I had 4 gels and 2 squeeze packets of the apple based kids food.  Before the race I took one of the Succeed Prerace Packets.  I took these for the first time at the Berryman 50 and felt great the entire race so decided to try them again.   The aid stations were serving Heed this year instead of Succeed so I just planned to refill my bottle with water as needed and then get a new bottle of Succeed at the end of each loop.  I used the Clip2 this time instead of the Ultra but not sure I noticed much difference between them.

The race started at 8 am.  My goal was to finish sub-6 hours like last year.  The temperature was about 72F and humidity didn't seem too bad.  I went shirtless and felt pretty comfortable. The 20 milers started off at the same time with us and the 10 milers would start an hour later.  I started off with a lot of people before we spread out.  There was some passing back and forth for awhile since I took it easier uphill than most people so would  pass them back on the flat and downhill sections.

Once more people cleared, I started thinking about our dogs Rusty and Bruno (died last Nov), then about a couple friends fathers that died on Friday, the stress of work, and the floor.  Really not pleasant thoughts at all but eventually was able to let go of all this and just enjoy the run.

I only stopped at a few aid stations to refill my bottles on all the loops even though it wasn't always quite empty so still had some of the orange flavor succeed.  The only thing I took from aid stations was watermelon and tried a packet of shot blocks a couple times plus took 1 gel each loop and 2 gels the last loop.   My pace was around 10-something per mile.

The hills always start to feel a little brutal during the last 3 miles of the loop but I walked/run up them as I could.  I picked up a new bottle of Succeed after each loop and drank the bottle of PowerAde and said hi to Hugh after each loop.  He was out running on the road during my first 2 loops.  I ran a few miles with Mindy the second loop running behind her awhile and ahead and then we eventually parted at an aid station but she wasn't far behind.  I've run with her at another race and always fun talking to her.  It seemed like I was seeing more people than usual on the trails even the 3rd loop.  I wasn't paying much attention to which race (10 mi, 20 mi, or 50K) they were running.

The temperature got up to around 91 I think but it stayed cloudy most of the time.  I felt strong and was amazed I ran each loop about the same time.  It did become a bit more difficult to keep the same pace as time went on but I really took advantage of the dry smooth trail conditions and the first 7 miles of the loop were very runnable.  The course was slightly different this year and I think easier than the previous 2 summer courses.  I had a very uneventful race.  No falls, no nausea, and stayed pretty well hydrated.  The only thing was I did wear a new pair of shoes and my little toes were rubbing a bit and pretty red but not blistered by the end.  I should have applied more Body Glide on them right before the race since I had done it when we left at home. Received a bottle opener finisher's medal at the end.

The entire 50K field was "chicked" by Kaci Lickteig, an Olympic Marathon hopeful, who likes to trail race ultras, for fun and ran a 4:19 and incredibly even splits at 1:27, 1:27, and 1:25.  I was pleased with my splits being pretty even and I think there were 2 others that had pretty even splits and 1 guy I know ran negatives.  This is tough to do on this loop course with the temperature warming up each loop.

I didn't feel like eating much of the post race food when we left around 2 pm.  We made a stop at Trader Joes in KC and decided on Cheesecake Factory an early dinner.  I had an everything pizza, salad, and Adam's peanut butter cheesecake.    I ran 8 miles the day after the race which felt pretty good once I warmed up.

My Pictures (all the pictures were free to download!) 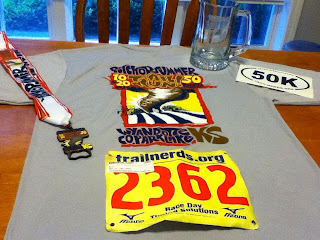 Posted by Andy Emerson at 9:02 PM No comments: