I am now officially training for my April 1st marathon so I increased my long run this week. This is a hilly course and felt it went really well. I backtracked 1 mile up the biggest hill on the course to add 2 more miles.

Thanks to Runner Susan for the mentioning this blog in her article Running with the Dogs
Posted by Andy Emerson at 7:47 PM No comments:

This is a prediction race that is run without a watch. I did not take the snow on the trail into consideration and predicted 1:07:00 (my time for last year). We started on the trail. I was in the lead at the beginning and stayed in the lead for the entire course which is 2 loops. On the last part of the loop, we run on the trail again. The condition of the trail with the hard snow was treacherous. After the first loop back on the pavement, I seemed to regain my speed, but once I hit the trail again I slowed a lot. I ended up being the second worst predictor so I didn’t go home with the sauerkraut. I placed 1st out of about 18 people. My ankles and legs felt pretty beat up at the end. 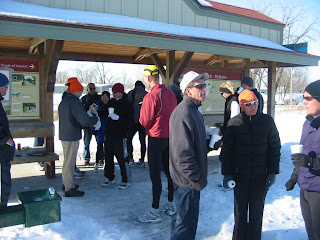 I woke up at 6:30 am and tried to think of an excuse to put the run off until later since my legs were sore. The temp outside was 36F so I decided that I didn’t have any excuses. Although the pace was slow it was an enjoyable run as the sun came up.

Rusty's Comeback: A Race to Bark About

NOTE: The following article was printed in the November 2006 Columbia Track Club Newsletter. Also, The Complete Running Network will be publishing an article about dogs and listing this blog in the article.

On October 7th, I ran the 13th Annual Dog Jog 5K Run (sponsored by the MU College of Veterinary Medicine Class of 2008) with my 9-year-old dog Rusty. Rusty loves to run and has only missed this race once since 1997. We call the Dog Jog "Puppy Christmas" at our house because it’s the most exciting day of the year for Rusty.

Rusty, a German Shepherd/Lab mix, was born in 1997 and has been running ever since he was a puppy. Rusty was just a puppy the first year we ran the dog jog, and I led him for most of the race because he could not keep up. He showed his competitive streak in 1998-2000 and pulled me during the race because I couldn’t keep his pace. I became a faster runner in 2001, and Rusty might’ve mellowed out somewhat, and from 2001 – 2004 we finished as the first place male-human-with-dog team with a minimum of pulling on either part.

I was out of town in 2005 at the time of the race but doubt Rusty would have been able to run very well; he had developed a problem with his left back leg in November 2004 and would not place weight on it. The vet took an MRI and found a torn anterior cruciate ligament (ACL) and prescribed glucosamine for arthritis and Deramaxx for pain. On some days Rusty seemed better, but then he would overextend himself running and limp and walk on 3 legs afterward. He still wanted to run during this time, and once he started running, he usually managed to run with all 4 legs, but he paid for it later.

The vet took another MRI in October 2005, and nothing had changed. Since Rusty wasn’t getting better and waiting would put him at risk for arthritis, we decided to try ACL repair surgery. An artificial suture was placed alongside the joint to "fool" the knee joint into thinking there is a ligament and permit it to move in a normal fashion. It was difficult to keep Rusty still during the recovery, but he recuperated quickly. Sometimes he would have a setback when he overdid it, but in the past year he seems to have made a full recovery with no major problems.

This year Rusty was at the start line, barking and ready for the race to start. We took off at a pretty good pace and were near the lead with 2 other dogs. Rusty kept a steady pace during the race and didn’t seem to slow down too much. He was not pulling me, and I didn’t want to push him, so I ran his pace. Near the last 250 yards, I decided to see if we could pass Mike Denehy and his dog Riley. Rusty pulled ahead with me, and we passed them crossing the finish line. We won by only 1 second, finishing with a time of 19:35. During the awards ceremony, Rusty demonstrated good sportsmanship by barking for many of the winners when the humans applauded.

Here’s a picture of Rusty and me sitting in the back of our Honda Element with all of our Dog Jog souvenirs. 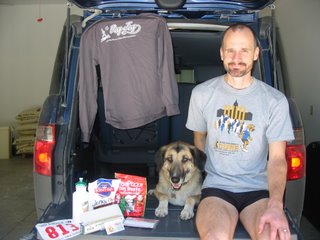 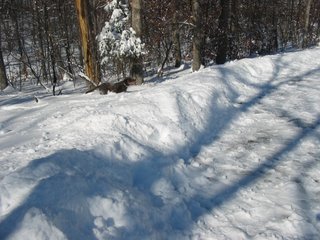 Bruno romping in the snow 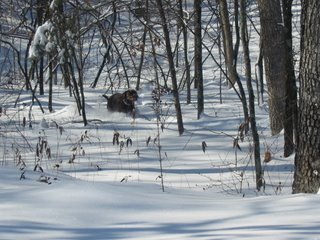 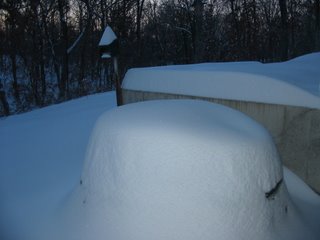 A few of us decided to attempt to do a run. We ended up running to the trail and then back downtown. Running in snow hard work!

Sun- Rest. Lower back hurt and no energy. I slept a lot today.