Saturday I finished my third Ozark Trail 100 miler. Several people have asked recently and in my mind, I have lost track of how many ultras and 100 mile races I’ve run. I keep a spreadsheet so checked and I am up to 84 ultras + 37 marathons. Seventeen ultras were 100 miles or more with only 9 that were traditional 100 mile races. The rest were either backyard or set time events which I have done more in recent years. I first ran the OT100 in 2010 and then in 2015. Since 2015, the only traditional 100s I’ve run is OT100 and Kettle Moraine. This time I was definitely reminded of the unique difficulties of running a traditional point to point 100 miler compared to other types of races where I’ve run 100 or more miles.

I had signed up for the Ohio Backyard Ultra which was to take place in March but was postponed to November 14 due to COVID. I withdrew as that didn’t work well for my schedule so was given a refund. I decided to attempt OT100 again and my pattern has been every 5 years so it seemed fitting. Also, the race occurring on November 7, I thought it would be a way to “celebrate” the end of the Presidential election and the election season. Also, it is a low-key smaller event and an easy drive, I’d done it before, and other friends signed up later so it kept looking even better. It would also be a time of social contact that has been lacking a lot this year. Of course 2020 has been surprising in many ways so I should have known anything can happen this year. The outcome of the stressful election wasn’t even known until I was out running. Maybe it was good I had a 100 mile run ahead to think about almost nothing and pretend the rest of the world doesn’t exist.

The weather before the race was looking warm (highs in mid-70s) but of course a lot of variation out on the trail especially at night. Definitely not ideal for a November race but I typically can deal with the heat pretty well although before the race I had been training in far cooler temperatures for several weeks. I set a pretty aggressive unrealistic dream goal having run the race in 23:50 in 2015 and training went really well this year. I was right on track for the first 2 aid stations up to mile 14. Less than a mile before I slipped walking up some steps and somehow lost my balance, fell at the top and cut near the side of my wrist on a very sharp rock. Thankfully, I was only a few minutes from the aid station so a big band aid was able to stop the bleeding and by the time it was ready to fall off later, it had stopped bleeding. I don’t know if this was a sign how the day would go or if I should have quit, but I felt good and continued on. It was getting warm so I ran shirtless probably about 12 hours which I really didn’t expect for November. At times there was a nice breeze and others times it was a bit warm for ideal conditions.

Right before Johnson Hollow aid station at mile 24.6, my eye caught a flag on the left and without looking right, I followed. And I followed a bit too long before turning around giving up hope I had gone the right direction. I had not looked for or followed the OT permanent marker as I focused on an irrelevant flag. On the way back, I see another guy that had done the same thing. He was far enough behind he hadn’t followed me but made the same mistake. Once I got to the aid station, I had 26 miles so assume I took at least a 1.4 mile detour. At that point, I was about 15 minutes off my goal to the next 2 aid stations.

I picked up my light at Highway DD, mile 47 which I was looking forward to seeing Tim Garvey working the aid station. I wasn’t moving as fast as 2 of the runners that left with me but I was still running. Also, I left the aid station with Joe Cooper who I had passed just before the aid station and he wasn’t feeling well but he did run behind me for a while. I arrived at Martin Rd (55 miles) around 6 pm and now was 52 min off my goal. From here it continued to go downhill but not entirely unexpected considering the challenges up to this point.

My Ultraspire 800 Ultra Waist Light (not the multisport) which is new failed me. I had returned the first light I was sent due to it shutting off unexpectedly. I incorrectly assumed the new light they sent me wouldn’t have the same issues. At my mile 61, it shut off abruptly after having been on for a little over an hour. I couldn’t see anything but soon could see the stars but that didn’t help me see the trail. I semi-patiently waited and kept trying and after 11 minutes it came back on so I continued and turned down to low setting since it was my theory that maybe it was overheating on medium. Thirty minutes later, it shuts off again during my mile 63. This time it comes on in 2 minutes. I still have about 4.5 miles to go so I figure it will happen again. I felt like walking at times but figured it better to get to Hazel Creek and pick up my headlamp as soon as possible. Fortunately, I made it without the light failing again. My pace wasn’t that fast but I was pushing faster than I would have if I wasn’t worried my light was going to fail again.

I was thankful to make it to Hazel Creek and only 35.5 miles to go. Sounds easy enough but I knew from 2010 from how I was feeling at this point that it would be far from easy. It was great to see the Columbia SMUT runners again since I hadn’t seen them since earlier in the day. Several were out crewing and pacing other runners.   I spent a little too long at the aid station but felt I needed the time to rest my legs while I sat and ate potato soup, a bit of quesadilla and items from my drop bag.

I left Hazel Creek around 8:30 pm about 1.5 hours later than planned but okay with it since I had plenty of time to finish even if I walked it in. However, I really wanted to be done as quickly as possible. Leaving, I realized my quads were really sore when I attempted to run, the course was extra challenging and I could not manage faster than 16 minutes per mile and sometimes slower for the stretch to Pigeon Roost at mile 75 but I was okay with that. After my wrong turn earlier in the day everything was about 2 miles further than posted for the race.

My pace slowed further (17 – 18 min) running into Berryman Camp at mile 80. I left Berryman around 12:30 am so 2.75 hours later than my original unrealistic goal. At this point, I knew 24 hours or less wasn’t happening and thinking 26 plus hours. I finally saw another runner again a few miles later walking slower than me that I passed with his pacer. I remember taking a Honey Stinger Ginsting to wake up a bit. From Berryman to Billy’s Branch, about 8.5 miles, pace was about 18 – 19 min. I’m pretty sleepy so details are a bit fuzzy for a while. Basically, a zombie walking through the woods just trying to get to the next aid station.

After leaving Billy’s Branch at 89 miles, I’m starting to have hope that the end is in sight although it will be in the daylight when I finish and not under 24 hours. It was a struggle for me to follow some of the trail into the next aid station, Henpeck Hollow which turned out to be about mile 96 for me. It was a combination of sleepiness, lots of leaves, wide trail and trying to see the permanent trail markers. Lose your focus for too long and you will end up wandering off trail. Even as I approached the aid station where they had put out some glow sticks, I was still having issues. These were my slowest miles of the day at 20+ min/mile. I knew the next section would be easier to follow so was happy when I reached Henpeck.  Shalini and the Terrain Trail runners fed me breakfast burritos and helped me get on my way in my sort of confused state which improved when I restarted.

I could see the trail for this section and it would be light soon. Perhaps, knowing the end was in sight, I was able to pick up the pace a bit until the end and have hope in finishing under 26 hours. I could see a runner behind me on the switchbacks after a few miles so there went my plan of walking it in.

As I approached the finish at Bass River, a couple told me there were some people waiting for me. It was nice to finish to the cheers of the Columbia SMUT group. I finished in 25 hours 25 minutes, 6th place overall. A finish was the end goal. There were 79 starters and 45 finishers.

This felt like one of the harder efforts I have done in a while but in its own unique way. This course is definitely a big challenge for me. If it had been easier this report would likely have been much shorter. Every time I’ve run OT, the aid stations and volunteers (many runners that I know) are amazing and that didn’t change even during a pandemic. Time will tell if I’m confident enough to attempt again in 5 years or sooner. I’d more likely want to be a pacer the next time. 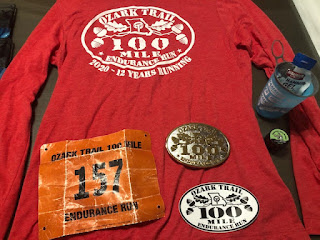 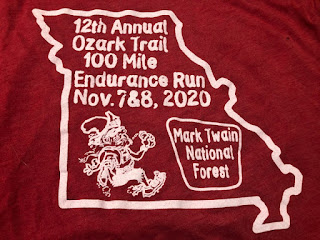 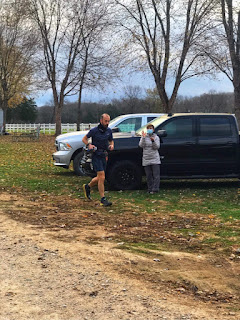 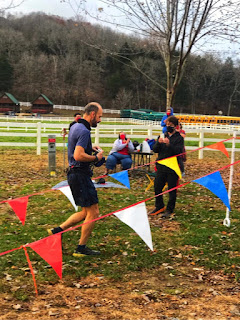 Posted by Andy Emerson at 5:10 PM No comments: