I have run this 50 miler 5 times and the marathon twice.  In recent years it has been pretty warm but this year it was only 37F when we started and the high was 63F.   I drove down with Jeff  on Friday and David, Brendan, and Cody met us at the campsite which Jed and Brandy saved for us. I slept and stayed warm but woke up pretty frequently.   At first it didn't seem that cold when we got up at 5 am but then started to feel it as I was getting ready.

I had a small bowl of cereal, pineapple and a Lean Body shake for breakfast and took my Succeed Pre-Race Pack.  Only managed to use the bathroom once which was not a good sign.  The 50 miler started at 6:30 am and the marathon at 8 am.  Unlike last year, it was not warm enough to run without a shirt.  I wore a short sleeve shirt and a long sleeve pullover with the thumb holes to keep my hands warm.    We were allowed a drop bag at the start and Brazil Creek at 16 miles and 41 miles.  The plan was to drop the long sleeve pullover there as it warmed up.

I had a variety of gels (some were free samples I tried), some Peach Tea GU chews (free sample), Beechnut Fruities (smoothie), Succeed, Carb Pro, and Hammer Fizz. I started out with Hammer Fizz in my bottle and switched to Succeed at 16  miles.  Also, had a bottle mixed and ready to go at the start.

The course is two 25.7 mi loops and we headed straight into the woods.  Not quite sure where I was placed as we went in but started pretty fast and was maybe in the top 10 with David behind me and a string of people behind us.  I don't really like haven't that many people behind me since I felt like I was holding them back.  At the first aid station David said he would see me later since he wanted to slow down.  After continuing to have a pack behind me and a few passing, I finally pulled over to pee and let them go past.

At about 9 miles, I am thinking I am not going to make it to a port-a-potty so start considering my options and looking for some really good leaves.  Once I pull enough leaves I head into the woods and was pleased I only wasted about a minute.  After the first 5 miles, being 9-something pace, the next 5 were mostly 10-something.

I caught up to Paul before Brazil Creek at 16 miles.  At the aid station, I added Carb Pro to my bottle, had a smoothie, and continued onward.  At most of the aid stations I ate nothing or had a small piece of banana and and orange slice, and a couple chips once.  After Brazil Creek, we turned onto a road for a quarter mile and Paul said he was going to take it easy up the hill.  Not much happened the rest of the first loop other than passed 3 more runners.

Being cooler I thought my first loop might be a little faster than last year but ended up being 4:20:07 something which was only a few seconds faster than last year and didn't spend much time at my drop bag.  I grabbed my bottle, another smoothie and headed out.  I passed the only female ahead of me within a mile or so and another guy shortly after.  Then I didn't see other 50 mile runners until mile 35 I caught another guy.  I left my shirt at Brazil Creek.

My overall average pace slowed 7 - 14 seconds which fluctuated around 7 seconds for quite awhile.   The last part of the course is more difficult and that is where it slowed even more.  After mile 41, I started calculating in my head every mile my finish time if I could maintain an 11 minute pace.  I figured I could finish in 8:57.  This helped pass the time and I wasn't sure if I was going to see any other runners.  Finally, just before the last aid station I catch another runner that says good, you don't look 50.  He said he was 50 so we were not in the same age group.  He wishes me well.  I skip over the last aid station since I had enough fluids and even dumped some.  My estimated finish time had dropped and I was hoping I wouldn't see any more runners but just over a mile from the end I passed another guy that was walking at times. He was not in my age group.

Although cold at the start overall the weather couldn't have been better.  I tripped on a few things but never fell.  I did drop my water bottle once when I tripped while trying to keep my balance and it hit my knee.  I felt like a had something left at the end so hopefully this bodes well for my upcoming 100 miler.  Also, unusual is that I felt like eating immediately after the race.  I had a brat, a few chips, and potato salad and then had a recovery shake and some yogurt.  Usually, I have to wait longer to eat.  Ankles are not sore and I am walking pretty well. 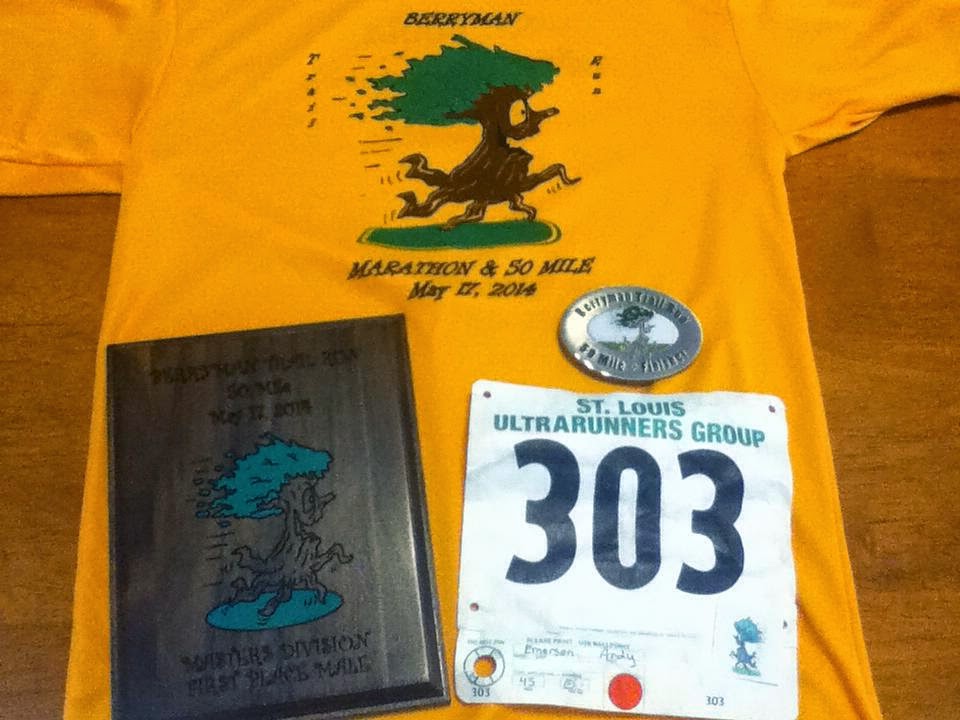 Posted by Andy Emerson at 7:36 AM No comments: