After signing up and predicting a 40 minute 10K, I ran a 2.7 mi warm up with Phil. Temperature was about 70F and humid, but not quite as warm as it has been lately in the morning. I didn't feel great, but figured I could come within a minute of my predicted time and easily avoid winning "The Thing" (see picture). Phil also chose 40 minutes. Last year, I ran in 39:35. There are no watches or GPS allowed in this race.

There were 39 runners that participated. The course is an out and back and somewhat hilly. There were 2 people that chose a faster time than Phil and me so we were the next to last to start at about 7:28 am. Matt and Mark started a minute behind us. I decided I would stay with Phil until the turn around which is about 2.9 miles out. I let him set the pace and stayed a step behind. I could hear Marc and Matt behind us and eventually Marc passed us. Jerry, who started 20 seconds ahead of us, stayed the same distance ahead of us. We saw many people coming back and the 2 leaders that were in danger of winning "The Thing". Richard was ahead, but looked like Jessica was probably going to catch him.

After the turn around I will feeling good, so picked up the pace. I took advantage of the downhills. If I felt my breathing too much, I slowed enough to recover. I soon caught up to and passed Jerry. The time seemed to go quickly on the way out as well as on the way back. Once I reached the last hill, I saw a lot of runners moving slower and begin to pass a lot of people.

At the end we have to run a loop 2 times at the school to finish the mileage. Here it was really congested. I inadvertently went the wrong side of the cone on the first loop, but they figured it out later. I passed Hugh on my second loop, just seconds from the finish. Overall, my actual time came to 39:39 and tied for 3rd place with Matt out of 39 runners. Hugh was 49:49 so was only 11 seconds off his prediction and was the best predictor.

Jessica, Brian's daughter ended up with the thing, but she is living in Colorado at the moment so he will likely end up caring for it. The guy that won it last year added some awesome gold wings to it. It is almost starting to look like something that would be cool to own for a year.

My sandbagging placement was 20th and I was the 36th person to start with Phil so passed 16 people. I really thought my time would be over 40 min this year so am very happy only 4 seconds slower and I took the first half conservatively. This was my second fastest time on this course. Always interesting trying to pace oneself without a GPS or watch, but can be done. I also enjoy catching up to people ahead of me which seems to help get through this race. 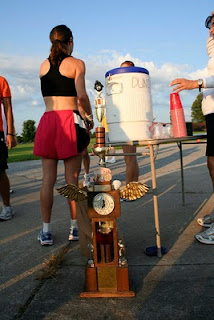 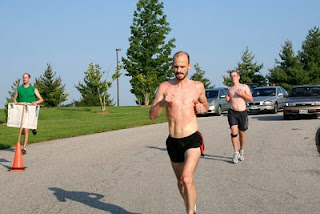 Me on the first loop before finishing