This year we used the new certified course which is still just as flat as the old course. 5 and 10K started at the same point. I started out fast sub-6 min on GPS behind Bill & Matt. Legs immediately did not feel good and probably from starting out too fast. Decided I better slow down to no faster than 6:15, but legs still didn't feel very fresh. I settled in behind another runner, Dana, and my first 3 mi were at just under 19 min. I had a guy fly by me and sped up a little and passed Dana. Miles 4 - 5 were into the wind and I was wishing I had run the 5K. I was slowing down and Dana passed me but I sped up a little. Once I hit 6 miles, I noticed I had a chance at finishing under 40 minutes, I gave all I had and finished 39:57 which is a new 10K PR for me. Surprising result considering I didn't feel great and glad for this race to be over.

Not a very good week of running for me. I've been dealing with a slight cold since Friday, not sleeping well, and not a much motivation.

RUNNING (Cross Country Extreme ). 5 miles. Time: 42:00 (8:24/mile).
Race.
Weight: 160 Shoes: Mizuno Wave Ascend (trail) (5.0 miles)
NOTES: Low pressure fun run. I'm not even sure of the time or distance. I dressed as a tuxedo cat and Hugh dressed as a dog. New to the race this year was crawling under some twine about a foot high obstacles while fireworks were being set off over us. Lots of smoke so difficult to see. Other obstacles on the course too. A couple of guys with chainsaws chasing people. The big round bales of hay we ran over had "scary" creatures. This was a tough course and then we had to do most of it again other than breathing fireworks smoke. The cat costume was a bit hot for the weather. I didn't place in my age group, but Hugh placed first in the 50 - 59. 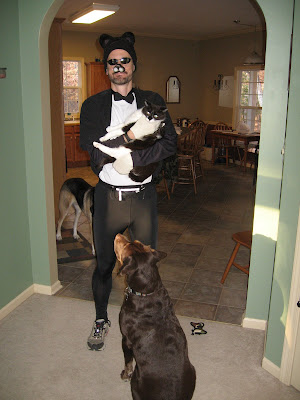 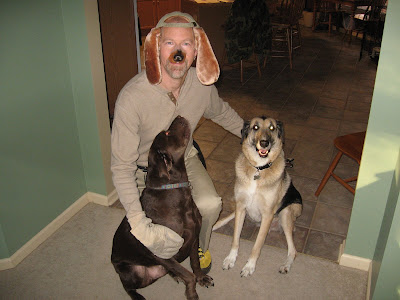 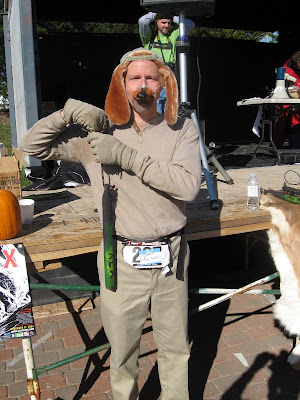 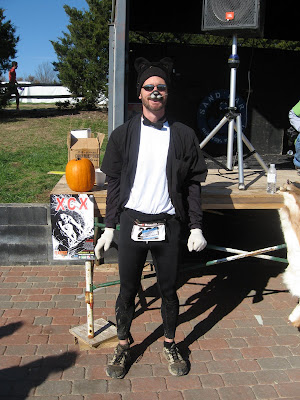 I'm getting around to posting a report on the Bass Pro Marathon that Hugh and me ran on Sunday. This is going to be a short report due to lack of time. Also, I'm going to quit posting my weekly mileage and it will be on my log if anyone is interested. I'm planning to switch to the Cool Running or Active.com log before the end of the year and this site will mostly be used to report on races.

We decided to run this one together to give him a chance to BQ on a course that was described as fairly flat. It was also fairly close to home. We did not announce to anyone we were running ahead of time.

We didn't have to commit early since they allowed registration on the morning of the race, but we registered the day before. There was supposed to be a free pasta dinner but no tickets were included in our packet. After some confusion, we got our tickets.

We showed up at 6:30 for the dinner and they were already cleaning up so we went out in search of food. I'm not sure why they closed down the food so early since we had to set the clocks back one hour and it was not advertised when the dinner ended. We found a place called Incredible Pizza that had pizza, pasta, salads, and desserts. It turned out to be quite yummy.

The race started at 7 am and temps were in the low 40s and no wind so I opted to just wear one long-sleeved shirt. The start was kind of crowded with the half and full starting together. I paced Hugh for about 15 miles at an 8 min pace which kept him from running the first half too fast. He seemed to be doing pretty well at that pace. After 15 miles, he was on his own and went on to finish and got his PR and a BQ.

I'm glad this one is over. It was a little hard to get motivated to run another marathon since this was my 4th (counting 1 ultra) in 8 weeks. This was the inaugural marathon and there were both good and bad points. The course was as advertised (although I know some will disagree). There were several out and back points and always someone recording our number. There was plenty of water and some of the stations even had bottled available. I was also impressed they were giving out E-gel although would have been nice to know this in advance.

The next day it was very difficult to find the finishing times which were not posted anywhere on the race web site. No information was given where to find them. I ended up finding them at the timing company site. They have everyones chip time and finishing time as 14 seconds difference rather than the actual difference so the times are not accurate.

Overall, it was a bit disorganized, but the volunteers on the course did a good job. Hopefully, they can take all the constructive comments they have received and have a better event next year.
Posted by Andy Emerson at 4:48 PM No comments: