I ran a 3 mile warm-up and had 3 minutes to wait before race started. I was definitely warm and sweaty so glad we started promptly at 8 am. I lined up on the left side of road in the front. I wore my HR monitor for this race since I was curious. In the past HR had been in the 160s during a 5K. I positioned myself closely behind Cesar M. and Clayton H. and stayed with them for the first mile. First mile had a small hill before turning on to South Hampton. First mile was a decent spit at 5:50.

I passed Clayton shortly after first mile and Cesar at about 1.3 mi. I kept pace steady and hoping that I would not get passed. I noticed HR in the low 160s so decided to try to keep it there and pace around 6 min. Second mile split was 6:05 and typically I run 2nd mile a bit slower so I was right on target. We hit the 2nd mile on the outer Providence Rd near Rock Bridge High. Then turned onto Peach Tree and then left at Nifong. I could see a guy ahead of me at this point and I was gaining.

Turned onto Bethel, but there wasn't enough race left to catch him. The last 0.2 was up a slight hill and I pushed pretty hard. Hit mile 3 at 5:48 and last 0.13 at 45 sec (5:35 pace). This race 7 seconds slower than my last PR on a certified course. This course was hillier and weight was up a bit today so that might have slowed me down some and did not taper for the race. I was surprised I placed 3rd overall. I am not sure how many runners but seemed like a really good turnout. I placed 1st in the 40 - 44 age group. Mark K. won overall and the 2nd place guy that I couldn't quite catch was 20 years old.

I really like this course better than the old Show-Me 5K course and it is also nice to run on a certified course. 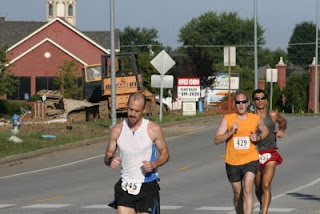 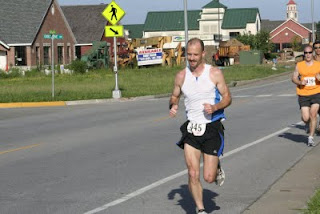 Posted by Andy Emerson at 10:46 AM No comments:

I registered for this duathlon about 2 weeks ago to make myself get back on the bike after not riding in over a year. I managed to get 3 rides before the race for a total of 51 miles. This was my third Show-Me Games duathlon and very little bike training is pretty typical for me.

The duathlon occurs concurrently with the triathlon with the duathlon starting with the first wave of swimmers. I arrived a little over an hour early to check in and didn’t seem to be many people, but all the racks filled up before the start. This duathlon is different than most in that it is only a bike and a run, not run/bike/run. The bike course is pretty challenging with steep hills, rolling hills, some nice flat in the middle for a few miles, and then more hills. The bike course is 20.5 miles and the run is a flat 5K.

Shortly after 8 am we were told to go line up our bikes. It seemed like more people doing the duathlon than I remember in the past. I positioned my bike behind in the mid pack. The first hill was not as bad as I remembered it but it was my second slowest mile. There was bit of passing back and forth until I found myself in a comfortable position. Uwe passed me on the bike, but I passed him on Forum since he had to stop to put his chain on. Later on, he catches up and easily passes me.

I managed to drink with my new bottle positioned between my aero bars and had it and my Shot Blocks finished at 16 miles. I maintained my position until near the end when I passed a guy with about 3 miles to go but I was also passed by someone else in the last couple miles. With all of the hills and scenery, this is not a dull course. I managed to reach a top speed of 38 mph which I am sure is slow compared to some.

The last half mile or so is downhill and then flat so the legs get a chance to recover just before the run. I made it to transition and I think I was out of there in less than a minute and just took off running as hard as I can to try to get the legs feeling normal as quickly as possible. Pace felt slower than my GPS said I was running. I was catching up to and passing runners. First mile split was 6:50 which was a bit slower than I hoped so I tried to pick up the pace. It was easy to pick up, but had to force myself. My breathing felt strange for this run I guess since I felt like I was breathing harder than normal. Second mile split was 6:24, and 3rd mile 6:13. Unofficial result that I had for my run was 19:34 which was a minute faster than a couple years ago. Bike estimate was 1:06:26 (18.5 mph), a few seconds slower than a couple years ago. Overall time was 1:27:00, a 29 second course PR thanks to my running improvement. I placed 1st in the 40 – 44 age group, passing the 2nd and 3rd guys during the run. I have no idea how I placed overall, but would guess at least in the top 25%.
Posted by Andy Emerson at 9:03 AM No comments:

Ran the Parley Pratt, an out and back race on the MKT. I started out in second place. There were lots of wet low hanging tree branches to dodge and it rained the entire time although not too hard. The trail was quite soft and standing water. A guy passed me in the first mile and also passed the guy ahead of me. I stayed behind this guy about age 18 the whole time. I picked up a bit in the last half mile and so did he. I finished 11 seconds behind him. The 40 year old guy that won finished in 23:06. I placed 3rd overall with a time of 24:58. If I wanted to have a good race, I probably should not have run today. My splits were slower than my recent training splits. This race is no indication of how good of shape I am in but more like an indication of how hard I have trained in the past couple weeks. I do think racing tired though is still a good workout and always fun to see what you can do even when you aren't feeling your best.
Posted by Andy Emerson at 7:55 PM 1 comment: