I ran the Free State 100K yesterday in Lawrence, KS.  I had to get up at 3 am to leave around 3:30 since I decided to drive in the morning of the race. I ran this race previously in 2010 and 2012 and the 100K distance both times. They offer a half marathon, marathon, and 40 miler as well. Most people run the half marathon. This time only 20 were signed up for the 100K and I'm guessing even fewer started.

I ran the Ozark Foothills 50K last week and had already signed up for the Flatrock 101K in 2 weeks. I wasn't planning to do Free State but read in Ultrarunning Magazine that the race series for the year was for races through April 24. I had signed up for Flatrock in December thinking it counted for the race series. The only distance I was missing was a 100K. I already had a 50K, 50 mile, and 100 mile. It turned out the races on the calendar after April 24 on the race series website were listed in error. The series actually was intended to go through April 24 and races after count for the next race series year. I'm hoping that running Free State improved my standing in my age group in the Midwest Region.

The temperature at the start was 56F but it eventually warmed up to 76. The 40 mile and 100K runners started at 6 am. The 100K is 3 loops. I started off at a conservative pace. The trails were dry and in excellent condition. A guy I was behind fell in the first half mile which was a reminder of how soon and how many times I fell the last time I ran this race. I remembered the course being a lot of little up and down and not very bad hills but a lot of them. I had forgotten there were a lot of rocks and roots so it required a lot of concentration to avoid tripping and falling. I'm only fell once the entire race and in the first loop. My water bottle took the impact and lost quite a bit but it saved me from injury.

I felt decent the first loop but it quickly warmed up. Fortunately, there was cloud cover for much of the race or it could have been worse.  I passed one 100K runner in the first loop and that would be the only one I passed during the entire race. I finished the first loop in 3:32:09, not as fast as I hoped but considering the 20 degree warmer temps than when I ran it 4 years ago, not too bad.

During the first and second loop I had noticed my achilles feeling a little tightness and also the inside of my left knee. It was just a minor annoyance. Fortunately, it didn't get worse and completely disappeared after a little muscle massage and more running. I stayed on a program of about 1 gel per hour plus a bottle of Sword every 10 miles. In between, I filled up with just water. I ate a few small things at aid stations such as banana, peanut butter/jelly wrap, Nutella wraps, Coke and watermelon. Definitely more than I consume at a 50K but I tried eating less at a 50 miler once and that didn't work out too well. I train with no nutrition and race with some which seems to work for me. I didn't have any issues keeping food down as it warmed up and energy level felt good. My drink and gels still tasted good. My pace definitely slowed from the heat. I ran the second loop in 4:11:13. I was ready to be done after the second loop since I knew the 3rd loop could take even longer. It wasn't that I couldn't do it but I had hoped not to be out longer than 11.5 hours. Temperature warmed up to 76 so realized I had to take into consideration and was thinking 12 hours and then 12.5 hours started to sound more reasonable. I somehow managed to keep my shirt on for the first most of the first 2 loops. I felt much cooler when I took it off. I had intended to take off after the first loop but forgot.

The third loop was pretty lonely. In previous loops besides the great volunteers at the aid stations that put ice in my bottle, there were runners in the other distances on the course. I didn't see any other runners until 0.75 mile from the end when I passed a 40 miler finisher. The third loop went better than expected. Since the 1st loop I had been running everything but the hills. I was just slower running as the temperatures increased but I never felt crappy. I felt strong, but slow. I was able to enjoy the course. I saw deer on several occasions. I could have done without the turkey buzzard eating the dead rotting something in the middle of the trail. I heard what I assume were snakes rustling in the leaves and grass as I ran by them. The course is near a lake so got to enjoy the view and breeze off the water as I ran along at several points. There is a challenging rocky section along the lake and I managed to run much of it and didn't fall. I completed the third loop in 4:29:02 so only slowed down 18 minutes which was an improvement over the 39 minutes I slowed down between the first and second.

I finished in 12:12:25. The overall winner Jeff Browning, a high ranking ultrarunner, finished in 8:30! Overall, I placed 5th out of 12 which is pretty close to midpack and one of the smallest group of ultra finishers in a race that I've run. At first I wondered if there was anyone else left on the course since I only noticed a couple cars in the parking lot when I finished but it is possible they could have walked from the nearby campground. Also, as I was driving out I noticed a 100K runner on the short section of road we had to run. I hoped to finish a little earlier just so I could get home earlier but I was happy to finish before it got dark. I accomplished my mission of adding a 100K to my race series finish so will see how I do once all their calculations are done in a couple weeks.

Posted by Andy Emerson at 10:02 PM No comments:

I ran the Ozark Foothills 50K on April 9. This year was the second year for the race and my first time running it. It is in the St. Louis area and only 1 hour 45 minutes drive from Columbia. Temperature was 30 at start and 48 by the time I finished.

The 25K started at 7:30 am and the 50K at 7:40 am. The course is 2 loops and for the first loop I had no idea if I was passing 25K or 50K runners but most likely 25K runners. The first 2 miles were all downhill so a very fast start. I've posted a link to my running log below with the course map/elevation. There definitely were some hills and the most memorable one occurred at mile 6 in the loop. Due to the hills my pace varied widely from 8:48 - 13:01. I was pleased with the number of 9-something pace miles I managed to run this course. Even with some hills, much of it was downhill and flat and not as technical as some 50Ks I have run.

I ran the first loop in 2:37 and had another 50K runner finish about the time I took off for the second loop. I only spent about 1 minute getting a new bottle and some banana. Also, I shed my zip pullover and went with just short sleeve shirt I had on underneath even though it wasn't very warm. This ended up being a good decision. There were 2 aid stations on each loop. One at 5 miles and one at 12 miles. Then at 15.5 miles at the beginning where we also were allowed to drop a bag. My GPS measured the loop at 15.4 so pretty close but others got slightly over 31 for the 2 loops. It seems like I'm always a little short no matter what kind of GPS I wear or the settings.

I eventually passed 4 guys in the 2nd loop. The last guy I passed really started to speed up once I passed him at mile 24 or so. The pressure was on me to keep up the pace which was easy enough for awhile but he sped up and kept up with me. I didn't offer to let him pass me at this point since he just let me pass him and he was moving slower up until that point. I thought he dropped back at the 27 mile aid station but he came back so I guess I motivated him to speed up. At about mile 29 I asked him if he wanted to pass since it was apparent he had more legs left than me. My breathing was great but legs were starting to tire a little. He declined to pass at this point and said it was his first ultra and he didn't really know if he paced the first loop right. I think he paced it well for a first ultra. Definitely better to go out a little slow and have a stronger finish. At mile 30, he says he will go around. I was slowing just a bit and was happy to see him go so I relaxed just a little. He sped up significantly and I couldn't see him.

I ended up finishing about 1:25 behind in 5:11:17 so maybe I could have kept up a little but I was happy to finish a little relaxed rather than racing the last mile. I had a 3 minute negative split which I am sure I can give him the credit for pushing me once I passed him. I had one of my slowest miles in the second loop but the really fast miles with him more than made up for it. I placed 6th overall so some tough competition. After the race they had pulled turkey, pork, cole slaw, beans, organic tortillas chips, and cookies. That's the basics since nothing eventful happened which I guess makes for a boring race report but I truly enjoyed this race and will most likely run it again. I was back home by 3:30 so I could enjoy the rest of the day relaxing. 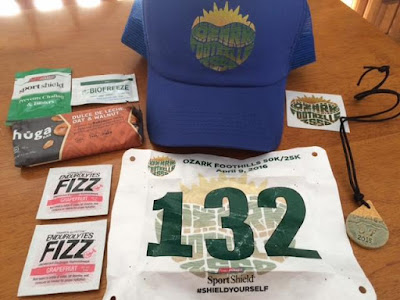 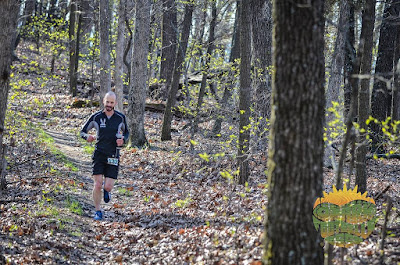 Posted by Andy Emerson at 5:02 PM No comments:

Here's a very brief but late report on the Psycho Wyco 50K that I ran in February. I hadn't run the winter version of this race in a few years but temperatures were predicted to be in the 70s so I signed up since I enjoy warm temps.

Pictured is the race swag except didn't get a sweatshirt since I signed up late. Okay since I really don't need another one and knew I probably wouldn't get one. Also, lots of great photos by Mile 90 Photography (included in race fee). 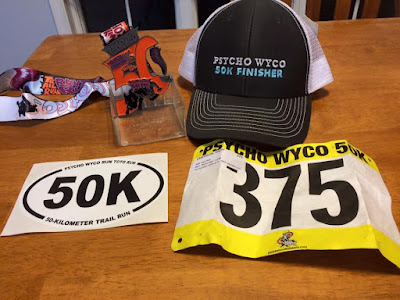 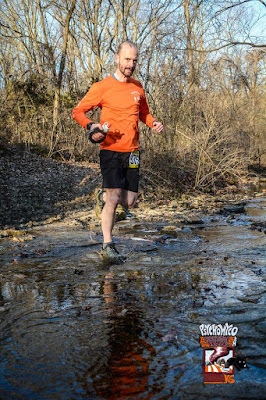 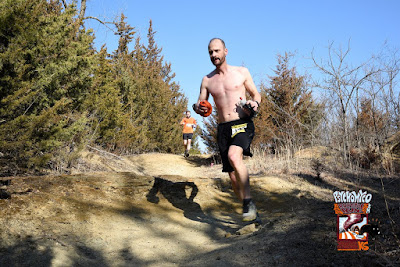 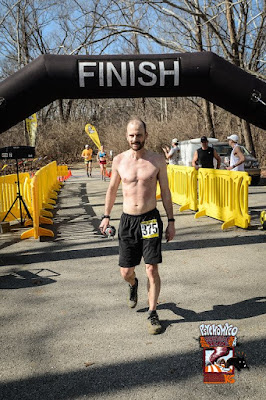 Posted by Andy Emerson at 4:34 PM No comments: