We had a group (20+) drive from Columbia to Grand Rivers, KY to run anywhere from the half marathon to the 50 miler.  Some of us camped on Friday and Saturday night and others checked into a hotel.  I did not sleep as well as I had hoped on Friday night but did not feel overly tired.  I was a little worried going into this race since I had not run since last Sunday.  I averaged 48 miles per week the prior 16 weeks, lifted weights at least twice per week since January, and did speed work so miles were lower than I have trained in the past.  I think this method of training is working for me since I felt pretty fresh most of the time and did not get burned out.

All distances started at 6:30 am so over 800 people.  I was a little worried about congestion but we had 1.9 miles to spread out before hitting the trail.  Ran with Lisa on the roads for about 1.5 miles and then sped up to get ahead of some people and catch up to the runners from Columbia I wanted to run with for awhile on the trail.  The course followed a loop on the trail and when we were done running our final loop (four 11.3 mile loops for the 50 miler), the 50 milers would run a short out and back on the road and then back to the finish in Grand Rivers, also on the road.  For the first loop we (David, Anatolie, Andy P.) all stayed together pretty well until near the end of the loop I decided to pass them since I needed to spend a little more time at the drop bag station refilling my bottle.

Before the start of the second loop, I had to use the porta-potty so took even longer than I expected.  I filled my bottle with Succeed (had started off the 1st loop with Fizz) and also drank one of the PowerAid Zeros in my drop bag.  It always goes down smooth and helps keep me from getting behind on hydration.  The guys I was running with earlier had already taken off when I started the second loop.  I wasn't feeling my best after the first loop, but not terrible either.  On a scale of 1 - 10, I estimated a 7.  I started the second loop with Steve who was running the 60K.  I ran with him for awhile and then sped up to see if I could catch the other guys.   I could see them at times but took quite awhile before I caught David and Anatolie.  I ran with them awhile and then decided to pass.

My A-goal was 8 hours so wanted to try to stay with the 9:40 pace.  My first and second loop were pretty close to the same pace.  At 13 miles I was maintaining a 9:46 pace but likely a little faster since GPS was a bit behind the mile markers.  At 24 miles, I was still at 9:46 average pace.  I was surprised since I did not feel that great during the second loop.  I drank Succeed Ultra, used a few gels, and ate a few pretzels and fighting off nausea even having a hard time eating pretzels.  However, energy level was fairly good so didn't need the nutrition but also was afraid I might get behind if I didn't eat a little.

Even though the legs were starting to feel the miles at 25 miles, I felt better the 3rd loop as long as I didn't try to eat much.  The Succeed was starting to not go down as easy so I had cup of Sprite at some of the aid stations.  I would pick up pretzels and end up throwing away since couldn't eat more than a bite, but kept forcing down a gel every so often (7 miles or so).  At the end of 35 miles per GPS I was at 10:00 average pace, but my GPS was off about 1.3 miles at the mile markers so knew I was actually in a little better position and hoping I could finish in 8 hr 20 min.  I don't remember anyone passing me and I had passed a few people the 3rd loop so felt I must be doing pretty well.  The question was could I hang on for the final loop.

I was dreading the 4th loop since I was tired and getting a little bored with the loops even though it was a very scenic course seeing it 3 times was plenty.  I drank about two thirds of another PowerAid before taking off on the final loop.  A few issues I noticed earlier with my right little toe rubbing and my left knee feeling weird had stopped.  The knee was just muscles pulling tight around it so nothing major and would stop when I picked up the pace.  The latter part of each loop was more challenging than the first with the hills.  The first part was actually pretty easy.  I managed to even run a lot of the hills rather than walk.  Even when it got difficult I would walk/run the hills although much slower than the first 3 loops.  I came up behind Shannon B. that I met at Backyard and said hi to her. I saw Shawn and Nathan near the end of my 4th loop and also passed Lelande since he was dealing with some cramps.  He nearly caught me by the end.  I had a tough time drinking any Succeed during the 4th loop so dumped it out near the end so I could just have what was left of my PowerAid Zero at my drop bag.  At 46 miles, my GPS showed my average pace was 10:12.  However, it was off 1.3 miles so actual pace per the course was about 9:55 I think.

It took an easier course than Berryman but finally broke my 50 mile PR from 2008 at Berryman which was almost 8 hr 54 min and walked the last 4 miles due to calf injury in that race so took off 45 min.  If I could ever run 50 miles at Berryman in 8 hours that would be amazing.  The temperatures for LBL were perfect starting out around 40 and getting no warmer than 68 with overcast all day.

I waited around after the race to see other people from our group finish and then many of us went out to dinner later at Patti's Settlement.  Then back to the campsite for a couple hours and off to bed.  Slept much better even though I smelled a skunk at 3 am that nearly made me feel sick.  Walked and ran a little (2+ miles) with David and Kate before we headed back to Columbia.  It turned out being a really fun trip having the support of runners that knew me and the time we got to spend together. 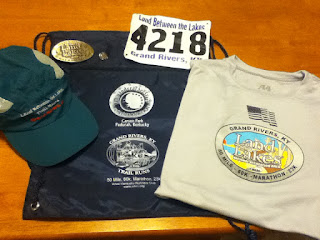 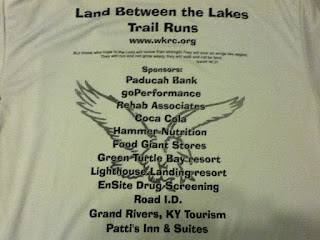