Since last year I have not generally been posting reports for races last than a half marathon, but I made an exception for this race and will do so again.

Last year I got my butt kicked at this race since I came in last place in my age group.  I was injured and wasn't able to train well but figured even if I had run faster it still would not have ended very well.  I did some speed workouts to prepare but they felt awful and weren't exactly encouraging.  The week before the race I cut back my mileage and the week of the race I ran only Tuesday and Thursday.  Also, stopped lifting weights last Sunday so hopefully that would be enough taper.

We had 6 guys for our Master's team.  Three of us traveled to St. Louis Friday night and arrived around 9 pm.  Our race wasn't until 10 am so we had plenty of time.  I ate breakfast around 7 and then went out and ran around in the parking lot a bit before we took off.  Once we got there Dan and I warmed up for 2.5 miles.  When we were in the tent I saw the Atlanta Track Club guys and introduced myself to the amazing Coach MadDog while we were getting ready.  The warmup felt pretty awful.  Many of the fastest Master's runners of all ages show up for this race so it is kind of intimidating when you know ahead of time you might not place as well as you do in local races.

Temperature was much warmer than last year.  I am guessing around 34F but there was a fairly strong wind.  The ground seemed pretty solid just walking around on the course but starting to thaw out a little.  Our race started at 10 am and we all lined up near the same starting box.  I was thinking I should take it easy (6:30) the first mile and not go out too fast.  I kept Tom on our team in sight for awhile knowing that I shouldn't pass him.  This year the course was just 4 identical loops except on the 4th loop we run down a long finishing shoot.  There was a clock and splits and each 2K.  I wore my GPS.

Unlike last year I didn't see any guys in there 60s around me (our age groups are on our backs) and very few 50s.  My first mile GPS split was 6:07 so was a little worried I had gone out too fast.  Every time I would see a 40 - 44 I was excited to catch up to them and pass.  I passed 2 in my first loop.  Also, passed a lot of other runners but my focus was trying to spot the 40 - 44 guys and get around them so I wouldn't place last like last year.  Second loop I passed another guy in my age group.  My strength seemed to be on the uphills the other runners slowed down more than I did.  Second mile split was 6:08 so was happy with the consistency but thinking this is almost my 5K pace.  However, I felt strong.

I passed a couple more in my age group in the 3rd loop so was looking like I wouldn't be last in my age group.  My 3rd mile was 6:17 and 4th mile was 6:20 so slowed a bit.  In the final group I passed another guy in my age group so was feeling really good.  I didn't notice any other guys passing me so that was encouraging.  My fifth mile was 6:14 so a little faster.  Even though my GPS was at 5 miles I had a little further to go.  The last 0.13 was 5:19 pace and 41 seconds. I was passed by at least one runner in the finishing shoot but also passed a couple. I couldn't quite catch up a 40 - 44 year old ahead of me.

We had several spectators on the course so was nice to hear my name each loop and also got a lot of pictures.   Also, got to meet Kevin H., a guy I have raced against at Truman State 5K.  I saw him standing at the finish so got to say hi.

I was happy with my result this year.  I never thought to check my 8K PR before this race since I knew it was on the road and we would be running on grass.  However, my 31:44 time was only 9 seconds slower than my 8K road PR set in 2007.  I felt like maybe I could have run a little faster the 4th mile but probably not much.  It was a relief to have the race done and actually place in the top 50% this time and beat 7 guys in my age group. 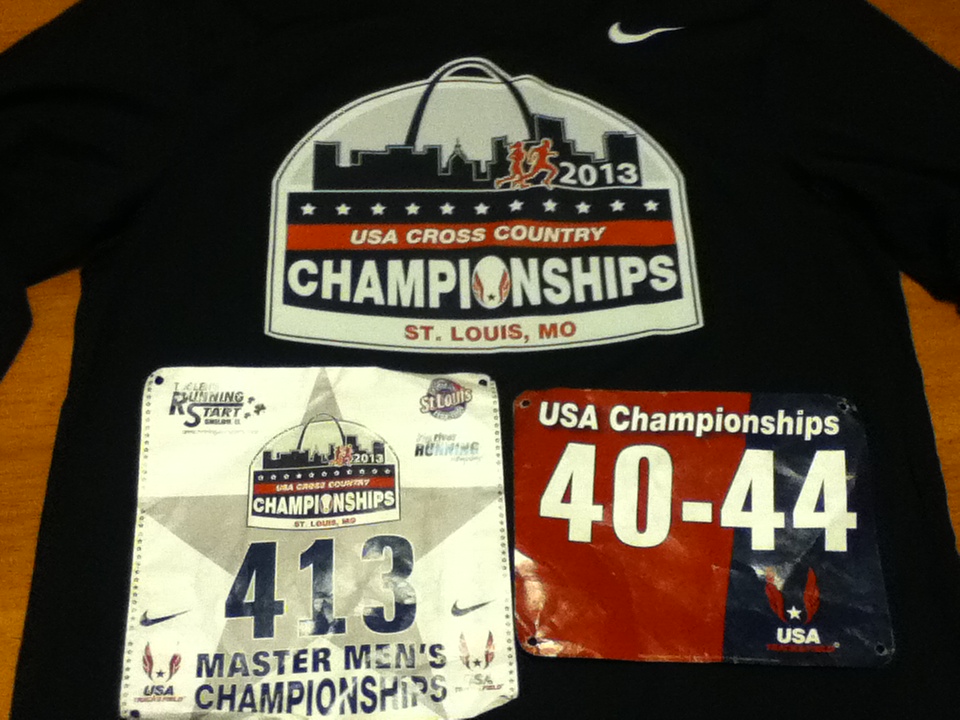 Posted by Andy Emerson at 7:39 PM No comments: