This past weekend I had the great honor of running my 6th Big Dog's Backyard Ultra. Basic concept is a 4.16667 mile race every hour, and you must toe the line or be eliminated. The last runner standing is the winner and everyone else a DNF. This year we submitted an application and I was lucky to be accepted as there were many worthy individuals that applied and also winners of other last runner standing events and others that assisted in contributing to higher mileage events. Hopefully, I will have the honor of running again but if not I've had a good run and will be okay with it. My first BDBU was in 2012 and I've run every year with the exception of 2013 and 2015 (no event held). There was an event held in 2011 but only on the trail instead of alternating every 12 hours between trail and road. The event has grown in popularity with 75 runners accepted and a full field. The first year I ran there were less than 30. In the past year there has been events held all over the world which will make securing a spot more difficult for me next year since many of these are Golden Ticket races. If I don't get in, I will consider doing one of the other events held in the US.

Even though I've run a lot of miles this year, I wasn't feeling very confident about this year's race. I've run a few too many ultra races this summer, gained about 8 lbs and haven't felt entirely recovered. I arrived about 30 minutes before the race. I decided to get every advantage I could and sleep in a hotel room instead of camp in the backyard this year. There were several media this year including Sports Illustrated and he asked if he could take a few photos while I was setting up. I was thinking this event has made the big time if SU is here and it is going to be pretty boring snapping photos of me setting up.

We started with 72 runners. Temperature felt perfect at the start in the upper 40s and I made the right decision to wear short sleeves since I felt plenty warm. With so many runners in the race and fewer dropping or timing out early, there is now constantly a conga line every loop, at least for awhile. The out and back we run on the road before going into the woods doesn't help much anymore. It isn't worth passing anyone since there is no reward to go fast and they are going fast enough to complete the loop in time with several minutes to spare. I tried to place myself between lines or at the end to give myself some space. I wore a heart rate monitor this year and my HR averaged 109 and I was never breathing hard. I ran my loops slower than in previous years go didn't have as much extra time. Most of the first 12 loops were between 54 - 55 minutes.

My HR may not have been very high but my legs didn't necessarily think it was feeling easy after all the time on the trail. It isn't a flat trail so it starts to take its toll. As usual I walked every hill and light footfalls downhill too. I ran quite a few of the trail loops with Marcy Beard who runs about the pace I wanted to run the trail this year. There was some conversation but most loops were pretty quiet when I was running with others. I honestly didn't feel like my legs started to warm up until about 50 miles which worried me. I think maybe I should have varied the pace from time to time to wake up all of the muscles.

After we finished the first 12 loops on the trail I changed my shoes. It felt very strange running on the road and some guy was really impressed with my low impact ultra shuffle on the road. It was more that my legs hadn't transitioned from trail to road in the first few steps. I decided to put on my calf compression socks before the next road loop and my feet and legs felt a bit better. I ran most road loops in 50 - 54 with the exception of loop 19 (~79 miles) in 56 minutes. It wasn't that much slower but I was feeling like things could go downhill even further quickly with the way my legs were feeling. Along with another runner, were were the last to finish that loop. My legs just felt like they were ready to be done moving. I decided when I sat down, I would not get back up. Then the 1 minute whistle blows and I get back up. I'm sitting just a few feet from the starting line so not too hard to get there. Also, with seeing other runners toeing the line again, it was easier to get back up. Less than a minute to decide so just did it.

On this loop I made a concerted effort to make my legs go faster, finished in 51 minutes and felt pretty good. I didn't want to risk pushing much harder for the next loops but for the remainder of the road, things felt pretty decent considering the mileage on my legs. In the past Backyards, I've had issues eating during the night of the road and running low on energy.  This time I had zero issues with nutrition. I played it safe and kept eating something between each loop. A lot of my nutrition was liquid including soda, Body Armor, Sword, and nutrition shakes. I didn't overdo it on drinking either since it wasn't that warm. Also ate grapes (the grape jelly grapes are incredibly delicious), bananas, oranges, veggie chips and hummus. I took several things such as gels and trail mix that I didn't touch but good to have options. The race provided chili which I had 2 small bowls and cornbread.

On the last loop of the road, I am seriously talking myself into not going back out and stopping at 100 miles. I felt like I was slow since more people were ahead of me than usual. Although, it was not unusual for almost 40 people to run their loops faster. There were runners with serious speed and they were using it all day which is debatable that this is the best strategy but different things work for different ability runners. When I completed the last road loop I ran 53:47 which was very encouraging so decided there was no excuse to not change my shoes and do a trail loop. I was feeling like I could complete one but knew I would have to push a bit which I hadn't been doing much up to this point.

There were 3 of us bringing up the rear during the first loop back on the trail. I told the guy in front of me 3/4 mile from the end how much time we had which convinced him to pick it up and we came in close together at 59:06. I barely had time to get a drink and didn't even think to grab a bottle. It wasn't that warm so I had been drinking all night just between loops.

I knew I was probably in danger of not finishing the last loop but figured it was better to be eliminated timing out than just quitting. I had done that 4 of my 5 previous Big's and slightly regretted it. After the out and back portion on the road, I was the last runner. However, I passed the clock at 6:49, 11 seconds faster than the previous loop. I passed a couple guys on the trail that were walking and did not complete the loop. I figured my attempt was going to be close but not close enough. I heard the 3 minute warning about half mile from the finish as I was climbing a hill. I also heard the 1 minute whistle, knew I wouldn't make it but kept running the best I could which wasn't very good. The last loop was 14 - 15 minute miles and needed to be just a little faster to make the cutoff.  I ended up with 108.2 miles  26 loops (104.1 official 25 loops), DNF.

So although I wasn't feeling very confident going into this year's event, I feel like I exceeded my expectations and was able to work through the unpleasantness when I was about to quit. It is so easy to want to quit during this race since most of us pretty much know we are a DNF going into it. But as Laz said the first time I ran Backyard and timed out on my first trail loop back from the road it was a spectacular DNF. Just quitting because you don't think you can do another loop, don't want to do another loop is boring. There are definitely valid reasons to quit but I don't think I had any good reasons this year so kept going. 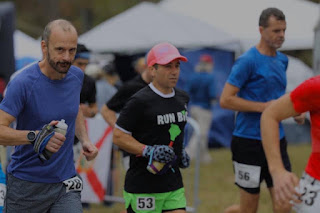 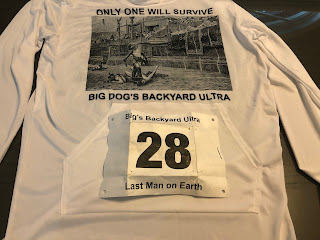 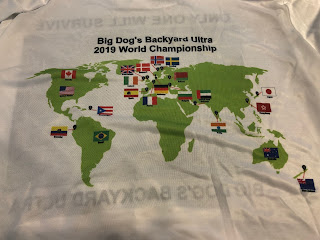 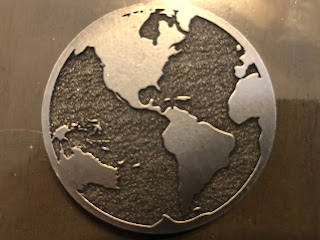 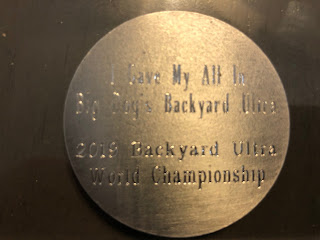 Posted by Andy Emerson at 3:35 PM No comments: