Saturday I ran my second 100K which was the same course as my first 100K.  I drove with Jeff on Friday afternoon.  We set up camp, grilled steaks, had a fire, and headed to bed around 10 pm.  I slept on my air mattress in the Element.  The temperature got down to around 37F.  I slept pretty poorly since the air was slowly going out of my air mattress so not quite as firm as I needed.  The alarm was set for 5:30 but I woke up about an hour before.

We headed over to the start around 6:30 am.  This race allows 2 drop bags but I opted for only 1 at the start since they were serving Succeed and S-Caps, gels, and always have good options at the aid stations.  The KC Trail Nerds, Ben Holmes, and the volunteers always do a superb job with their races.  The trails are marked clearly and they have plenty of volunteers on the course.

We started promptly at 7 am.  When I ran this course 2 years ago it was muddy and I ran in 11 hr 25 minutes and was taking it easy since this was before my first 100 miler.  This year the course was completely dry so I was hoping for around 10 hr 30 min or at least a PR.  At about 0.3 miles I took my first fall and of course there were 2 runners behind me. I am thinking it is pretty embarrassing that I fell so soon but had not fallen in a couple months so I was due.  There were lots of rocks and roots on the course to trip over and somehow I kept hitting them with my big toes but didn't always fall.  After about 10 miles I was pretty much running alone the rest of the day.  I wore a long sleeved shirt over my short sleeve plus gloves for the first 10 miles.  Then I removed the long sleeved and had to carry for the last hour of the first loop as it warmed up.  Temps at the start were around 40.  I ended up falling one more time during the first loop this time when I passed a walker going up a hill and landed on my butt.  I finished the first loop in 3:22 which was a little slower than I had hoped even though I had run most of the hills since they were pretty short.

I refilled my bottle, picked up a couple gels and started the second loop.  Staying consistent with the first loop I fell 2 more times!  This time there was a guy I had been passing back and forth for a few miles.  I fell running in front of him and within a minute I fell again somehow landing on my back.  My problem shoulder hurt a bit so I started walking and it soon felt better.  As the guy passed me again he said was glad he wasn't the only one falling.  I was getting pretty frustrated with all the falling and banging my big toes.  I just wasn't quite in the groove for some reason.  I finished the second loop in 3:50 so quite a bit slower than the first one.

I filled with Succeed grabbed some gels and quickly took off before I changed my mind and stopped at 40 miles.  Shortly into the 3rd loop, I passed the guy I had passed back and forth earlier.  I was hanging on moving forward and feeling strong but just not running as fast as I had hoped at this point possibly due to the warmer temp since it got up to 75.  I walked more of the hills these last 2 loops.  I ended up falling 1 more time and this time I hit my left big toe pretty hard.  I go flying and my gel goes flying out of the pocket of my water bottle.  This time there was no one there to witness my spectacular fall.  Both big toe metatarsal joints were hurting.  In all these falls I just ever so slightly had a small knee abrasion so was pretty lucky. I was worried I was going to hit the toe again and that I'd break it so tried to be extra careful.

When I got to the rocky part that runs close to the lake I was still running okay even though I had big rocks to run over and this part of the course was a bit more technical.  At this point a guy catches me and says he doesn't need around since he is pacing the guy behind him.  Knowing they were behind me kept me moving.  My water bottle was nearly empty and I was feeling too warm.  I wanted to take my shirt off but was afraid I would fall so wanted the extra protection for my skin.  Shortly we get to the next aid station and the volunteer filled my bottle with Succeed and ice.  I had a quick bite of melon and some chips and took off feeling 100% better and running faster.  This part of the course was also in the trees and felt cooler.

I skipped the last aid station about 3 miles from the end since I was so ready to be done.  This course goes mostly out and back along the lake but is on 2 different trails that run very close together.  In some places you can see runners on the other trail.  There were times I heard people but weren't sure which trail they were on.  The course is also very curvy.  About 2 miles from the end I hear a couple guys talking and see one.  I was pretty sure it was the guys that had caught up to me on the rocks earlier.  Not wanting to be passed at this late stage I keep moving and ran all the hills the rest of the way.  It seemed like most of the 3rd loop I was keeping a pace fairly close to the latter part of the second loop.  I finished the third loop in 4:03 (slowed 13 minutes from the second) and the guy with the pacer was just less than a minute behind me.

I placed 4th overall out of 40 finishers.  There were more that started but some dropped back to the 40 miler and others didn't quite finish the 3rd loop.  There were 12 that started the 100K and dropped to the 40 mile.  Overall time was 11 hr 14 min so a 11 minute PR over 2 years ago.  I hoped for better but can't complain placing 4th.  The trend for almost all except the second place guy was to run each loop slower.

I wasn't able to eat anything at the end so consumed a chocolate milk before taking a shower and heading home.  My mouth felt extremely dry so had a Powerade as well.  I had noticed my mouth getting really dry in the latter part of the race even though I was drinking so I must have been a bit dehydrated.  My left big toe metatarsal joint looked a bit swollen on Sunday, but looked much better today so damage wasn't too bad.  I remember the first time I ran this course the day seemed to drag on forever since it was the longest I had run at this time.  I was out there almost as long this time but didn't seem so bad compared to running 100 miles.


Posted by Andy Emerson at 4:11 PM No comments:

My policy this year has been only to write about races that are half marathon or longer, but will mention I ran the St. Patrick's Day 5K the week after running 3 Days of Syllamo and ran quite well at 18:41 and 11th overall.  I did take it easier that week and only ran 37 miles.  I  signed up for the Sedalia Half Marathon so had 3 weeks out from Syllamo which I ran 2 track workouts plus mile intervals workout on a Saturday and have gotten my average mileage back into the 50s.

It has been unseasonably warm this year and the day of the half we started with temperatures in the 60s.  I missed running the half last year since I had just started running again after back surgery the week of the half so I ran the 5K.  I wasn't tapered for this half but still wanted to attempt my PR which was 1:23:51 two years ago.   I started out running with Katie hoping I could keep up with her since she runs faster 5Ks than me.  I noticed right away soreness in my legs running fast on the road but it got better after a few miles. We caught up to another guy in a green shirt and stayed close. The miles were close to goal but the pace felt tough to me for this early in the race.

About mile 6, I ran ahead of them and was in second. Ryan was way ahead. About at 6.5 miiles I notice both my calves are feeling sore. Legs were working fine so just hoping I could run through the pain and the hills weren't too bad or it wouldn't have been easy.. It was more just muscle soreness like I felt after Syllamo and I guess at this speed it made a reappearance.  Eventually, the pain subsides and the guy we had run with earlier catches up to me. We pass back and forth for about 2.5 miles until mile 11.5. A young guy running his first half blows right past us like we are standing still. I speed up a little and then the calf soreness returns and green shirt guy passes me. A couple years ago when it was 32F on race day  I finished this with faster average splits the last 2 miles, but I slowed down a little this time and ran them in 6:36.

Overall pace was 6:30 and time 1:25:33 and felt I really had to work for it and it was good I had some runners to actually push me or I may have given up sooner. Overall placed 4th of 161 and first place 40 - 49/masters (26 runners in AG) and got one of the usual glass blocks. I think there were 140 runners. A fun trip too since we road tripped with friends and many others were there as well. We all went out to eat together after. 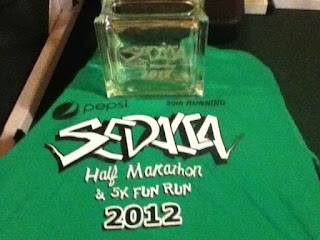 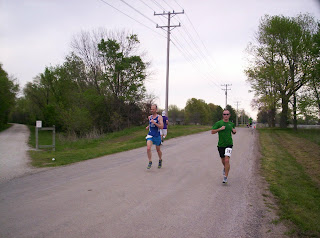 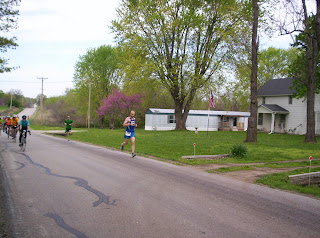 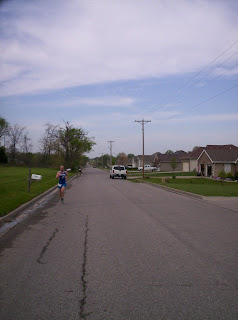 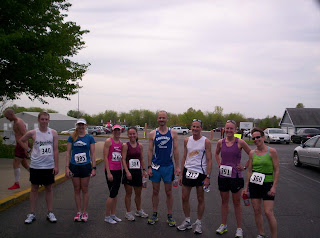 Posted by Andy Emerson at 9:00 PM No comments: