I skipped this race last year since it was shortly after running Mohican 100 mile. I decided to sign up again this year and was my 4th time running the summer version. There is a spring version too but I've always preferred to run it when it is more likely to be hot and humid and hopefully drier. Drier was not the case this year. I did feel good going into this race, assumed it would be hot and assumed it would be muddy.

Hugh rode with me to Kansas City the morning of the race.   Two year ago, we had to go to a church and take a bus but this year they let the 50K and 20 milers park in the parking lot at the race. We arrived in plenty of time. Hugh took off for his run in the park on the roads and I waited for the race to start. The 50K course is 3 loops. I had a cooler ready with 2 extra bottles filled with Sword, ice, and a  Huma gel or 2 in the bottle pocket. Also, had 2 Powerade Zeros. I took the Succeed Prerace Packet which I have been doing for a few years.

The race started at 8 am.  My goal was to finish sub-6 hours like last year.  The temperature was about 75F and a bit humid.  The 20 milers started off at the same time with us and the 10 milers would start an hour later.  I started off pretty close to the front runners which disappeared.  The course was quite muddy but my legs were fresh and I maintained a 10-something to 12-something pace for the first 10 miles.  I had watermelon at aid stations and was drinking a lot. The first loop was 1 hr 53 min and 4th overall with 2 other runners coming in right behind me.

I drank a Powerade Zero, got a fresh bottle and was on my way, not wasting any time. The 2 guys behind me were ahead but I caught them pretty soon on the second loop where they were walking through where it was very muddy. The course was getting worse and most of it was muddy which made it difficult to run with heavy shoes. I still attempted to run so was able to go around them.

I was passed by 1 runner in loop 2 and finished in 2 hr 25 min and 5th overall. Splits were 11 - 15 min per mile. I was seriously ready to be done, but wasn't going to drop down distance. I would complete the last loop no matter how long it took. I didn't see Hugh until I started my 3rd loop where he was on the trail and warned him I would be awhile and ended up being more than awhile.

It took lots of concentration and overall my outlook was pretty good considering the conditions. Photographer took some great pictures too. Temperature ended up going up to 90-something but since I was moving so slow it was the least of my worries.

The course was different than 2013. Due to the mud, we stayed on bridle trails.

We made a stop at Trader Joes in KC and decided on Cheesecake Factory for dinner.  I was too wiped out to run the next day so took a rest day.

My Pictures (all the pictures were free to download!) 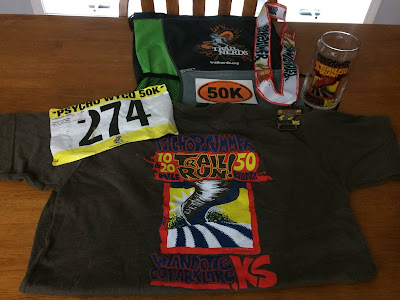 Posted by Andy Emerson at 5:20 PM No comments: