After a 7 month break from ultramarathons, Saturday I ran my 8th Berryman 50 miler. Always a fun race and we had a large contingent of local runners doing the 50 mi or marathon. After running 50 ultras, these reports are actually getting harder for me to write but since I may want to look back and remember, I will focus on the major highlights.

Conditions often are not ideal and this year was no exception. Course was muddy in sections since it rained Friday night and during some of the race. Often I am running alone for most of the race but this year enjoyed the company of Tim, a runner from St Joseph for around 20 miles from mile 11 - 31. I've seen him at many races but never have had an opportunity to run with him for so long.

I found an older woman running the marathon lying on the trail at about 41 miles. She yelled help before I even got to her. She told me she had fallen, twisted her leg and couldn't get up. I asked if she wanted me to move her off the trail before I went for help. She wasn't sure she could move so I told her I would run as fast as I could to the next aid station, only 3/4 mile to get help. I notified them and went on my way. Tim came upon her after and stayed until she got help. She had broken her femur and had to be 4-wheeled out and life-flighted.

Then 1 mile from the end found another older woman puking on the trail. She was going to stop until she felt better. Nausea was getting to me the last few miles since the sun came out later in the day.

I finished the first loop in 4:41 with Tim and second in 5:02 for my slowest Berryman ever 9:43. However, it was a nice surprise to place second overall and win the Masters award. I was spent and don't think I could have gone faster. Definitely slower if Tim hadn't been with me for 20 miles.

It was great having the support of everyone out there. It is a special race since I know so many of the runners. Highlight of the day and all my Berrymans was seeing Karen, a friend I run the trails with finish the 50 miler and be the second ever 60+ woman to finish and also a new record!

GPS was a little strange the last 7 miles or so. I had 25.5 miles the first loop (which I think is close) and 27.5 miles the second loop. 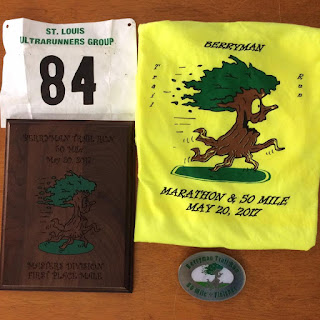 Posted by Andy Emerson at 8:51 PM No comments: