I got a little behind on race reports but here's a short recap on Rock Bridge Revenge and Big's Backyard Ultra. Then a more in depth report of 4 Fore 30 which was my first time running this event. 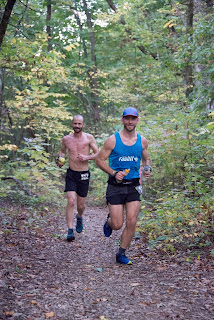 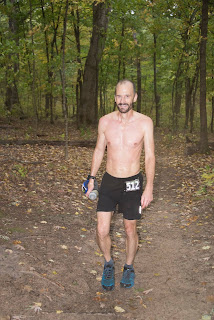 I ran 112 miles at Backyard Ultra which exceeded my expectations. I was hoping to beat my previous record of 104 miles. I decided to stop even though I had about 4 extra minutes. I was unsure if I could do another loop under 1 hour and wanted it to count. That is my lame excuse. For some reason I felt pretty disconnected this time. I was able to continue and not let my mind tell me to stop as soon as other years. Allan B. went with me and helped me after he timed out. 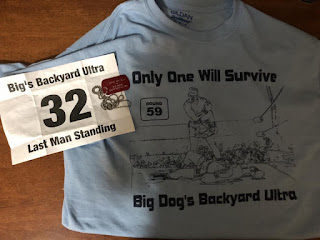 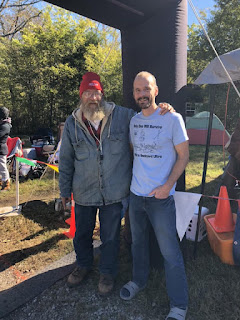 December 2 I ran 4 Fore 30 which was held in Camdenton, MO at the Lake Valley Golf Club. It was a last runner standing type event where at the top of each hour we started the 4 mile course with 1 hour to complete. Those that fail to do so or fail to show up at the start line at the top of the hour are eliminated. This race differed from Big’s Backyard Ultra in that it would end when one runner remained or 30 hours whichever came first where BBU can go on for days. If both started the 30th hour, the first to finish in the final hour is the winner. Proceeds from the race benefited Kids’ Harbor, a Lake-area based nonprofit that assists victims of child abuse.

I went to bed at 7:30 Friday night and left very early Saturday for the 6 am start and 80 minute drive. When I arrived I picked up my bib and set up my aid station near the start.

Thirty six runners, 26 men and 10 women toed the start line for this inaugural race. The 2 oldest were in their 60s and 2 youngest were under 17. Scott, one of the race directors ran the first loop with us to make sure we could see the markings in the dark due to the rain. It rained Friday night so there was water standing in a few places along the cart path where we ran. We passed the start line at mile 2. There was an aid station at the start and many runners set up their own as well or went back to their cars between loops since parking was close. The temperature at the start was in the upper 40s and soon in the 50s as the sun came out. It was a nice day so the golfers were out but we still got to use the entire 4 mile cart path and no issues with golf balls but there were a few minor incidents with walnuts that blew off some trees. Being on the cart path, there was plenty of time for me to complete the course in an hour and have 15+ minutes to rest, eat, etc, but I didn’t sleep.

The race aid station served potatoes, grilled cheese, quesadillas, rollups, chicken noodle soup, oranges, pork rinds and more. I did not try the pork rinds but I’m sure they would have been just fine. Margie, working the aid station much of the time would walk around offering grilled cheese or soup. When I passed at the 2 mile point, she would ask if I was okay or needed anything. Everyone was so helpful and it was appreciated. I brought a variety of food and ate grapes, bananas, divinity, pecan pie, protein shakes (a new thing for me during a race and worked well), pepperoni/cheese wraps (purchased and too dry with no condiments), cola, ginger ale, Sword, mixed nuts, Sweet Brown Sugar Sun Chips, guac, fruit and chia cups, Pickle Juice, and Muddy Buddies. I had more food than I needed and brought gels but consumed none of them as I am not that fond of them during these longer events. The little pecan pies are great since they pack 480 calories into a very small amount of food which is enough to keep me going a couple hours. Also, the pie and other sweets definitely stave off any bonk that has hit me when I didn’t use something with an infusion of sugar during an event this long.

The course had some hills which I walked. Some of the downhills were pretty steep and hard on the quads so I tried to be gentle going downhill. During the day it was quite windy at times but much of it worked out to be a tailwind depending on the direction I was headed at the time. Gradually it started to cool off and I had to change into a long sleeve shirt and eventually a wind breaker later when it was cold and windy.

During the first 12 hours (7 hours/loops being an ultra at 28 miles) several runners ended up completing their first ultra with some going even further than the first 12 hours. A few had never even completed a marathon and I think a lot of people went further than they originally expected. Our bib indicated how far we planned to go and there were 5 runners that had said they planned to go all the way (bibs in the 90s). Runners gradually dropped out and from the 12th – 17th hour, we had 9 runners still going strong. It got colder during the night and there was a gusty wind but I was plenty warm with a shirt, zip pullover, windbreaker, gloves, headband, and Vuori shorts that are a little longer and heavier than most I wear. They breathe well and I love them in any temperature. Earlier I had moved my car to where I had my aid station set up since there were fewer runners left. I sat in the car between loops to stay out of the wind and waited for the 3 minutes, 2 minute and 1 minute warning. When it was cold there was no need to get out until the 1 minute warning and still had over a half minute to wait to start again.

My quads were hurting at 64 miles. My left knee and right quad were hurting at 68 miles. The course was slanted in places and the steep downhills were taking their toll a little. I slowed down on purpose in loop 17 and 18. Starting the 18th hour, there were 4 runners remaining and then 3 runners remaining at 19th hour. In loop 19, I picked it up, nothing hurt and the change in how my legs felt was amazing. I think the issue was just muscles tightening up and pulling on knees and quads as I have experienced this before a few times.

Finally only 2 runners in the 20th hour which was sooner than I expected and things started to get real. I had met Chris, the other remaining runner after HOA where he finished right me and only 1 minute. We were also set up next to each other all day. I was a little stressed about the fact that if we went 30 hours, that the fastest person in the final loop was declared the winner. I’m not sure I can explain why but I really didn’t want to see it end this way. I would have preferred a cumulative time overall or maybe flip a coin over the thought of racing anyone on the final loop. I like him and wouldn’t want his race to end this way if I were to run it faster. If it ended with me losing the loop, I wouldn’t have like it either so I just didn’t see how I could feel good about winning or even losing in that way. However, this is what I signed up for so I needed a strategy to be ready if that 30th loop race took place. I had no doubt I could go 120 mile or 30 hours since the pace was easy for me. Chris still looked strong too. He had run slower earlier in the day but once his friends he was running with left, he picked up the pace. I decided I needed to slow down until the final loop and conserve my energy. I’ve had bursts of speed at the end of a few 100 milers before and probably could do the same after 116 miles if necessary.

I never got the chance to race him the final loop since shortly after we started loop 22, I noticed he had not passed me and then noticed I wasn’t seeing his light. I was afraid to turn around and look so kept running. Once I went around the first corner, I didn’t see his light and was a little sad thinking he must have turned around since shutting off his light would have been highly unlikely on this course in the dark. I picked up the pace a bit thinking this was likely my last loop. As I was approaching the start, I noticed his truck with the headlights on. Before I was a little in denial that he had dropped but this confirmed. I started to walk that direction and the race director’s pointed out that he was with them right where I needed to turn to complete the last 2 miles. He congratulated me and said he decided he wanted to go home. I told him he was a very strong runner but that I understood. I went back out and completed the last 2 miles in 43:38 counting the time stopped so about as fast as my first loop of the day.

I changed into some drier clothes and then went inside to receive my award goodies including an acrylic painting, shirts, and golf ball with 76 miles printed on it. They had golf balls for different milestones and it was the closest to 88 miles. I drove home before I started to get sleepy. Usually, after Big’s Backyard Ultra, I am ready to wind down for a few months with little interest in doing any more ultras. Allan had alerted me to this race months ago and I had kept in mind and then signed up on my birthday before the price went up. For the 6 weeks between BBU and 4 Fore 30, I didn’t run as much with my longest run at 16 miles and ended up with 2 weeks of 20-ish and 4 weeks of 40-ish miles. I took many days off due to the cold weather and decided that I would go and have fun. It was fun but I am now ready to hibernate for a few months.

Finally, I’d like to say that the race directors Alysia and Scott did an excellent job for this inaugural event and Margie (and others) did an excellent job taking care of everyone at the aid station. The friendly runners and caring volunteers are another reminder there is still good in this world. 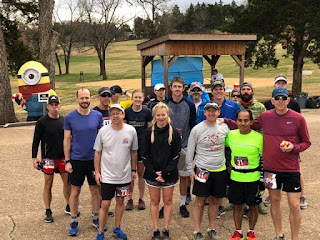 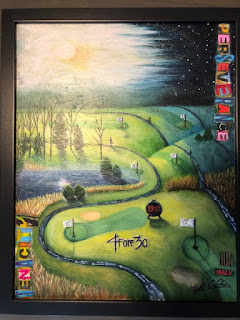 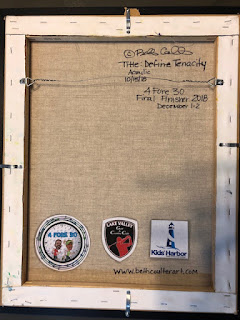 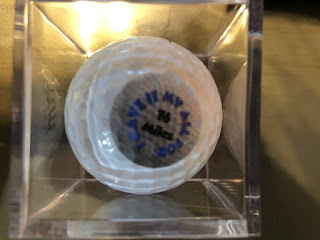 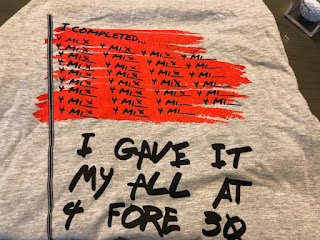