Ran the Paws in the Park today. Hugh ran with Rusty and I ran with Bruno. We got there less than 10 min before it was to start since Rusty gets impatient waiting to run and won't stop barking. Dan was already there with Copper and Tanner. The race started at 9:10 instead of 9 so we had to wait a few minutes. I lined up in front since I figured Bruno would start pretty fast. Today was the first time I had run a race with Bruno. In the past I ran with Rusty and each mile the pace fades just a little.

I started off in 3rd place with Jackie and her dog. There were 2 runners without dogs ahead of us. Once we pulled ahead of her my position did not change the rest of the race. Bruno ran an incredible first mile at 5:55, 2nd mile slower, and then the last 0.76 (course was short) pace was a little slower and I think he was ready to be done. Probably good it wasn't quite a 5K.

Hugh had a rough start since he tripped over someone's leash and apparently about 8 people or so went down. Dan went down in the grass. Hugh hit the sidewalk and was scraped in 4 places on his right side. He got right back up and ran. Dan got up and said there were so many walkers with dogs on the side walk he decided he could either walk it or go to the dog park and run. He went to the dog park. Fortunately, I didn't know about this incident until after the race or would have worried about it and may not have even run.

Bruno came in first male with dog and Jackie was behind us not too far. The prize was a $10 gift certificate to Olive Garden. The trophy for Bruno was a tennis ball, with a rawhide and dog mounted to a board covered with material. It had a blue bone dog tag that said first place male with dog. I hope next year they start the race in a more open area so people don't get tangled up at the beginning and get hurt.

Overall placed 3rd of 136 and 2 guys ahead of me ran without dogs. 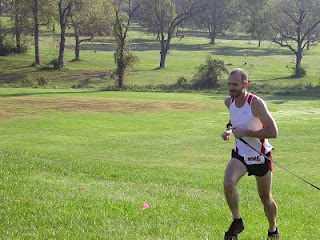 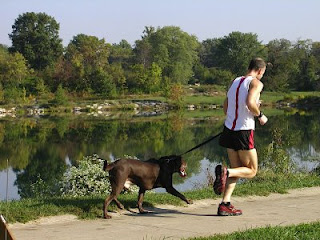 Bruno and Andy (at this point he is dragging a little) 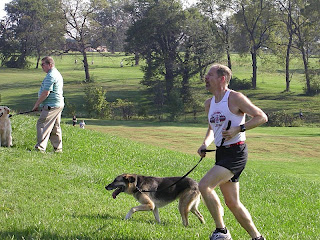 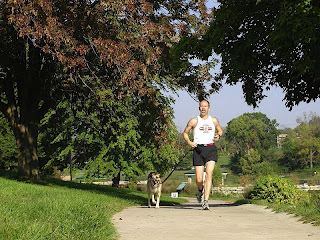 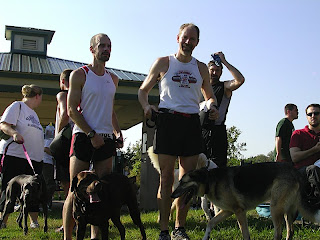 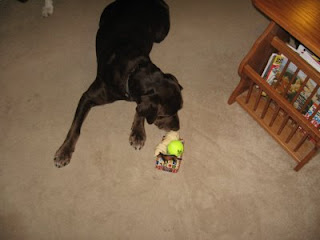 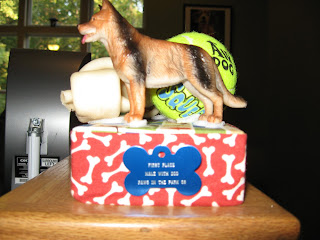 Very cute trophy.
Have a great run at your marathon this weekend.