My enthusiasm for writing ultra race reports must be waning since it has been 3 weeks since I ran this race. David and Steve rode down with me and we camped with other Columbia runners. I slept in the Element and was good other than the air mattress leaked a little.  It was 66F at the start this year and got up to 78F. Last year it was only 37F.  I have run this 50 miler 6 times and the marathon twice.

I had pre-race shake, Lean Body shake, and banana for breakfast and took my Succeed Pre-Race Pack.  The 50 miler started at 6:30 am and the marathon at 8 am.  I opted to not run with a shirt which turned out to be a great idea later when it started raining.  We were allowed a drop bag at the start and Brazil Creek at 16 miles and 41 miles.  Since I have so many water bottles I stored 1 at the start and 2 at Brazil Creek to save time later.  They were already filled with Sword and water.  Also, had Huma gels stashed in the bags and some PowerAde Zero for extra hydration.

I didn't plug my Garmin into the charger the day before since it was fully charged when I left home. It died 0.8 miles into the race which I just took as a sign that I didn't need it. My goal was to finish the first loop somewhere around 4:20 and hopefully under 9 hours overall. I did have a clock on my FitBit so could sort of keep track of how I was doing except I wasn't always sure of the distance at the aid stations and sometimes forgot to look at the signs.

It started raining in the first loop (25.7 miles) and it helped cool the temp down some. It would continue to rain until about an hour or so before I finished.  Nothing eventful happened in the first loop.  I finished it in 4:19 and in 7th place overall. I was worried maybe I shouldn't have run all the hills.

The second loop was tougher. I didn't see anyone most of the loop other than 3 marathoners that I passed. About 4 miles or so from the end I started to catch a runner ahead of me and eventual reeled him in as he really started to slow. I could tell I was slowing myself earlier but once I saw him, it motivated me to try to catch him since I wasn't sure if he was in my age group.  It turned out he was older. After I passed him I slipped on some mud and cut my hand a little.  The trails were getting messy in some places during the second loop.

At the aid stations, I would mostly have a little fruit (banana or orange), chips a couple times, and coke a couple times. Otherwise, I got all my nutrition from 4 bottles of Sword and 7 Huma gels. In between, I filled with plain water and had PowerAde Zero at the drop bags.

Ended up finishing in 9:04:21, 6th overall, and 1st place masters for the 4th consecutive year.  I had my doubts this year since I didn't feel as trained as I wanted to be. 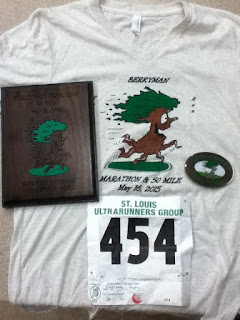 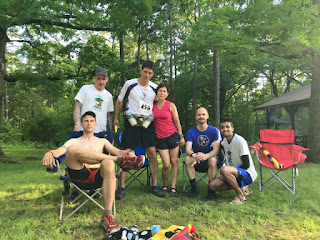 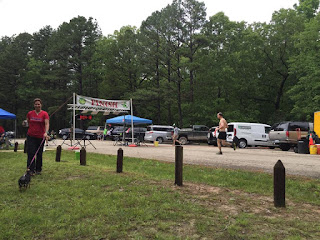 Posted by Andy Emerson at 3:30 PM No comments: