This week is my highest mileage week that I’ve run since 2005 when I ran 60 miles a couple different weeks. I felt strong all week with no aches, no morning stiffness, no muscle soreness, and good energy level all week. 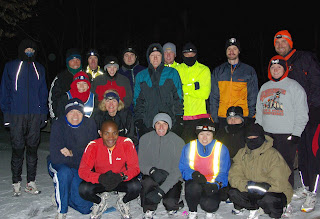 Sun- Brown Station Rd, 16 mi, 2:11:46, 8:14/mi
I woke up about 7 am feeling fairly well rested. It had snowed as predicted and I was very tempted to wait until later in the day to run but got dressed and went outside to measure the snow. We had 4.5 in on top of the 2 in ice/snow that hasn’t melted. After ½ mile of running on a snow packed road, I decided to run a different route since I didn’t have time to complete a 16 mile run at a slower pace in the snow. The gravel road that I normally run had not been cleared so I stayed on the snow-cleared pavement and ran out and back. Most of this course doesn’t have a shoulder to run on, but there were very few cars. The paved roads had been cleared but were wet and slushy in areas. This course had a few hills but not as many as the course I had planned to do. Considering the wet and slushy areas, I’m very happy with the pace. It didn’t feel like I was running an 8:15 average but it has been awhile since I’ve done that on a long run. The cold that developed on Friday seems to have passed quickly. I’m feeling almost normal again. 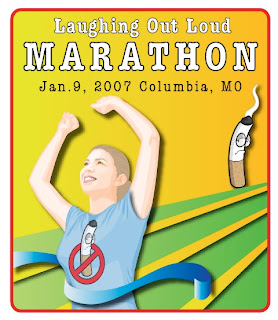 The Laughing out Loud Marathon was an idea that Jim Linville, a runner, and former smoker, came up with after the Columbia City Council approved the no smoking ban in restaurants, bars, and bingo halls. The ordinance took effect on January 9th so Jim wanted to have a marathon on that day. For Jim LOL, means “love our lungs”. You can read more about his concept of a marathon to celebrate the smoking ban in the Columbia Missourian article Marathon to Celebrate Start of Smoking Ban

Hugh and me planned to run to about mile 14.5 (his parent's house) and then get on our bikes to finish the rest. I had run 5.6 miles at 5:30 am with the Tues/Th group and Hugh had run with the dogs. The marathon start was at Athena, in downtown Columbia. Registration was $1 and all participants had to sign a waiver which Jim said his lawyer had approved. It must have been a very slow news day since several from the local news media (about 2 TV, 1 radio, 1 newspaper) were on hand to witness this crazy event. The weather was beautiful. Temps were in the upper mid to upper 30’s, quite windy (up to 20 mph), and sunny.

After a short speech from Jim, we were off. I’m guessing there were about 15 people that started. There was no course support for the marathon so we had to obey traffic laws although many people stopped and let us pass. The first part took us through downtown Columbia where I’m sure we received lots of strange looks with a couple runners dressed as cigarettes and a chicken skipping and running all over the place. Everyone pretty much stayed close together until about mile 5 and then we split up. I think the chicken collapsed and got on the tandem about mile 3 and gave runners rides if they wanted.

The course was very urban, and challenging with the traffic. We ran on the shoulder, close to the shoulder, and sidewalks. Some parts there were very little traffic and really not a problem. Up to mile 12 took us through the north part of Columbia and out of the city. At this point, I was saying to a couple other runners that I caught up to that I could probably finish the course running, but would evaluate when I got to mile 14.5. About mile 12 I caught up to Hugh (he had run ahead of everyone) and we ran together. He said that he was thinking about running the complete course and I told him I thought the same. We decided to make our decision when we reached our bikes at 14.5. We passed mile 13 and had been running for a little over 2 hours.

About mile 14, a radio interviewer started running with me and asking questions. Shortly after that we stopped at Hugh’s parents to use the bathroom and get water. I guess after having so much fun running 2 hours, and feeling relaxed not worrying about our time, all good sense left us and we decided to continue on for the entire marathon.

After mile 16, there was a big hill that we decided to walk. About mile 17, we stopped at Tryathletics to purchase some Sports Beans and drink water. There were several people biking as well as a tandem bike that the chicken was riding at this point, plus they had a cooler full of water, energy gels, and beer. After standing around for awhile Hugh took off and then N. and D. (using initials to protect their identity) and myself took off. They each had a beer and were going to try running and drinking. I didn’t get far (less than a mile) with them and D. decided he needed a bathroom and they stopped at The Starting Block

Ahead, I could see Hugh so caught up to him. While we were in Tryathletics, we had been passed by S. and he was running the entire course, and then L. also passed us since she was on her bike. After mile 20, Hugh decided he needed to walk. He wanted me to go ahead, but I stayed with him. We would run and then walk. At mile 21 we were passed by N. and D.

For the rest of the course, we would run a little, and then walk a lot. We wanted to make it by 5 pm and would be under 5 hours. Those last 4 miles seemed to take forever, but we made it to the finish in 4:55:56. We went inside Athena and we gave Jim our time, got our finishers ribbons and had some food. Jim said that we finished last and the prize was his ice cream maker that he won at Cross Country X-Treme.

We decided that we needed some more food, changed our clothes, and had dinner at the Bread Basket. My legs still felt okay last night, but this morning my ankle hurts a bit but I’m walking. Being out on the course for almost 5 hrs I can now more fully appreciate the accomplishment of those that take longer than I normally do to finish. This totally unexpected marathon was number 8 for me.

Today, there was an article in the Missourian Smoke Free and Breathless There were some close up shots of me and Hugh running ahead of the chicken in the print version. The picture online you can see our backsides. Hugh’s brother said he seen us on KMIZ news. We didn’t stay up late enough to see if we were on KOMU as well, but I will check my tapes later.

I carried my camera and have posted all of the pictures 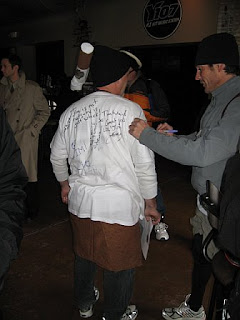 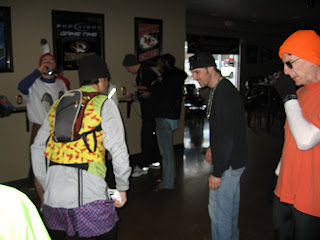 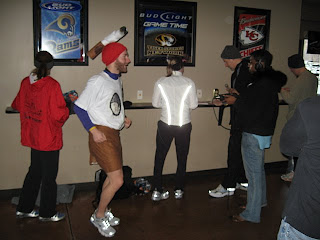 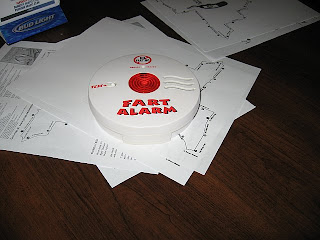 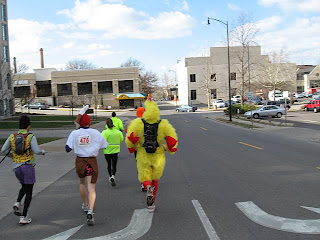 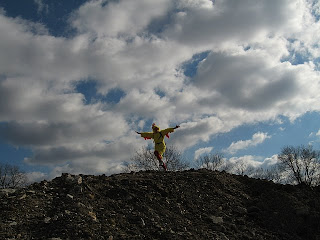 Chicken being King of the Mountain 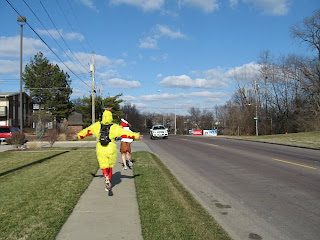 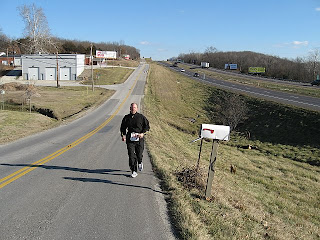 Hugh about at mile 12 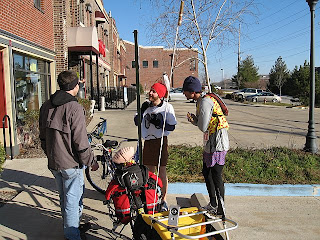 Taking a break at Tryathletics
Posted by Andy Emerson at 10:24 AM 3 comments:

Legs very tired earlier this week, but managed a couple pretty good runs and hit 50 miles. Ankles feel great after long run yesterday and run today. I’ve been doing exercises and stretches for my ankles twice per week very consistently since Chicago. It seems to be working.

My legs were pretty much done before I started this race. I gave it my best effort.