Attempting to write some brief reports on some of my races so far this year. After 4 Fore 30 in December, I developed what I determined to be IT Band pain my right leg. This took awhile to figure out and I continued to mostly run through it. I took a week off and no improvement at all so I started to do exercises and slowly seen improvement. It was aggravated the most on trails. About 2 weeks after Syllamo (4 months from onset) it thankfully disappeared. I've had some good training and a few decent races.

The course this year was the out and back. I ran the first half in 4:58 and the last have in 5:08 but it felt even slower. 10:06 - 8th place and the fastest I've run this version of the 50 miler but helps I didn't run the 50K the day before. I loved running it on fresh legs. Overall went okay but I had some trouble running some of the downhills due to the IT band issues I was having so I couldn’t push the downhill. Also, I didn’t feel great the last 10 miles which was likely lack of adequate hydration.

The weather was perfect and finally got some adequate sun that I’ve been missing all winter. It was my second slowest of the 6 times for the 20k. At some point later in the 20K, I was finally able to run downhill easier. I said after finishing the 50 miler it was going to be a scenic hike. I did end up running it about the same pace as the 50 miler. We had 6 runners from Columbia at the 50 miler and we all finished. It was a challenging day for all of us. We snapped a photo before the race. 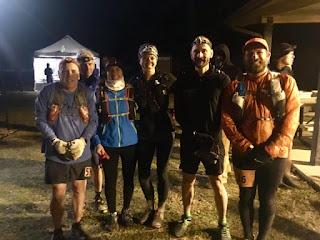 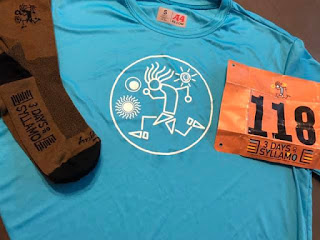 Lion’s Roar 24 hour (April 12-13) was truly an amazing experience to watch unfold from the moment Jason Conner envisioned this race to the very end. He pulled it off and it was a success. It was truly a community event held at Columbia Christian Academy on their 37 acre property. There were many local sponsors that added so much to this event. He sought input from the running community and followed through. The race raised an amazing amount of money for Welcome Home, an organization that assists at-risk veterans. The event also held a 6 hour and 12 hour option.

There were so many amazing performances happening in 6, 12, and 24 hours by many friends and others setting distance PRs. The course was run on a mowed 2 mile path which amazingly came out 2 miles every time on my GPS. I kept pushing forward at whatever pace my body would allow and mostly running but many walk breaks. I had a couple rough loops in the 90s and my final 2 I was pretty much ready to be done. I ate something I shouldn’t have at 102 miles, came back up repeatedly but felt much better in a couple minutes and continued the next loop.

The support and encouragement by everyone was amazing. Without that I would not have completed 59 loops, 118 miles, a new distance PR and at 100 miles, 19:27, a new 100 mile PR. Hugh came and completed my last loop with me. Earlier in the day he made an appearance with AbbyDog who was happy to see me. Placed 1st overall and honored to be part of the top 3 with Sam and Joe, both amazing performances as well. Too many others to mention but some really impressive distances were reached. 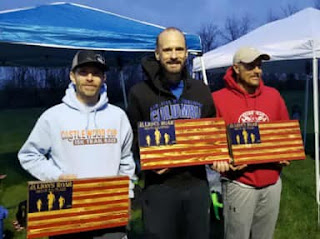 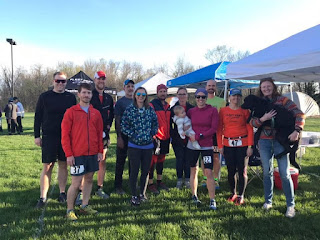 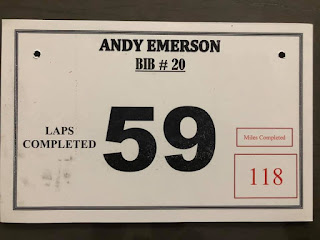 Trail of Four Winds 25K
This race took place on May 4 and was only 1 hour 15 minutes drive to Lake Ozark, Public Beach #2. I felt good the entire race and splits were very even. The trails were a bit muddy but I still felt like it was a very fast course. I finished the 25K (15.87 mi GPS) in 2:17:36, 10th overall and 2nd in age group. I enjoyed the opportunity to try out my fast trail running legs a little before Berryman. I've already signed up for next year's race. 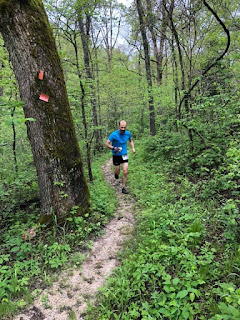 Berryman
Survived my 12th Berryman (10th 50 miler there and 2 marathons). I was surprised I placed 2nd overall but I tend to place well when it is warmer. My first loop was 4:37 and second was 5:10. Very impressed by Joe Cooper's win and I expected he would do well. It was a tough day for everyone with a lot of challenges.I was not happy to be passing Sam Wells at Brazil Creek, 41 miles since I knew he wasn't doing well. I walked a bit before telling him I was going to see if I could run. I I passed 4 people in the 2nd loop, moving into 2nd the last 5 miles. I’ve never ended a race with so much salt on my skin and shorts. Observed others with the same. Guessing something to do with lack of heat acclimation. Otherwise, I felt pretty decent considering the heat. We started the race at 65 and it was supposed to get up to 85. I hydrated with Pickle Juice at each drop bag, plus a bottle of Body Armour for electrolytes. I ate 3 gels plus a Bonk bar and a mostly a little fruit at aid stations. I forgot to bring Body Glide but had no major problems. I credit the Vuori shorts and feet were the same as usual and heels and a few toes a little red. 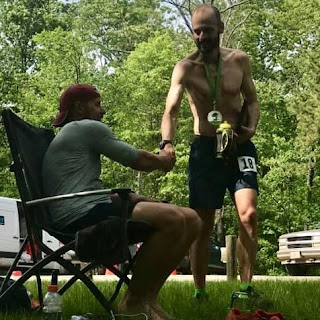 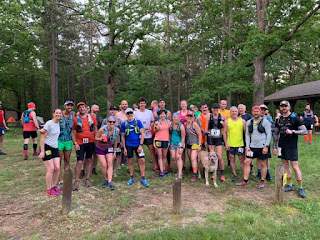