If you are looking for Sedalia Half Marathon and 5K results, they will be posted at Columbia Track Club soon.

Hugh and I decided early this morning to go to Sedalia.  He ran the half and I ran the 5K.  We arrived around 8 am and it was cloudy and windy but no rain or snow yet.  Temp was around 32 I think.  We had a good turnout of Columbia area runners.  I thought about going out for a little warm up but did not.  The 5K started with the half marathon.  We were off and running and immediately noticed my hamstrings and butt were still quite sore from running on Thursday.  Not sure if it was the attempt at new running for which they said would make the butt sore or just the fact that I am out of running shape.

After we ran the little loop through the neighborhood, I caught up to Paul S., race director of OT100 and also have run many races with him such as Kettle Morraine 100 last June.  He was running about the pace I felt I could run around 7 min.  Felt good so talked with him until where I had to turn around which was about the 2 mile point.  Talking was a bit hard due to the pace but glad I got to run a bit and talk with him.  After I turned around I was in 3rd place and Norm yelled something like "he is slowing down" yet the guy ahead of me seemed to have a good lead.  Someone said "don't look back" but I did since I didn't think anyone was close behind me and the next runner looked pretty far behind.  I sped up just slightly when I turned around.

I noticed I was closing in on the guy ahead (he was slowing) and I had a little over a half mile to go.  I soon caught him.  At first I thought he was going to fight to stay with me since I heard him on my heels, but soon he was far behind.    I tried to keep about the same pace until the end and finished in 21:11 - second overall out of 48 which earned me a half marathon brick.  I guess I got off easy this year only running a 5K and getting a half marathon brick.

After the 5K, I headed back out toward the Katy Trail and ran out 2 miles from the school where the race finished.  Trail was pretty boring and only saw 1 other runner.  About 20 min into my run, I notice some flakes and next thing I know it is sleeting and is painful stinging sleet.  The weather said 10% chance of rain this morning and then 70% chance of rain/snow in the afternoon, but nothing about sleet!  I felt bad for all the runners.  I got back to the car and changed my clothes hoping to catch the first runner, but Ryan was too fast and came in while I was in the car.

I took a few pictures with my iPod camera since I forgot the good one.  There was no race photographer so wish I had brought the better camera.  I was surprised to see Dan H. come in at 1:34, a new PR for him and Hugh came in at 1:44 which was close to his PR of 1:40 and received a brick in his age group.  Several runners PR'd today in spite of the painful sleet and brisk wind.

This race is a fundraiser for Max Lewis and they had some great raffle prizes so I bought 6 tickets for $5.  Then they let you go up and pick out a prize and I ended up with a cool Sharper Image 5 Day Internet Weather Station which will make it even handier to check those forecasts for upcoming runs or decided whether to bike to work.

On the way home we stopped at Mazzios for their awesome salad bar and a combo pizza! 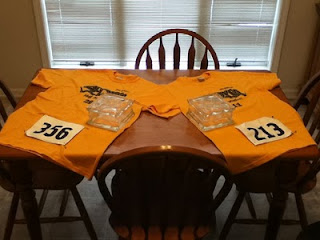 Hello! I see that you had a microdiscectomy and got back to running 5 weeks later? How are you doing with your sciatica and/or back pain now?

I had surgery 10 weeks ago and can't wait to get back to jogging/running! Thanks so much!

I'm still doing great and have run a bunch of ultras since the surgery. You will improve for up to a year so it will get better. The doctor told me 6 weeks, but I waited 5.5 weeks. Let me know if you have any other questions.