We arrived about 7:30 am to pick up our chip and then I ran the course with Hugh, Dan, John, and Aaron as a warm up. We had a pretty fast warm-up at about 8 min pace.

I was happy to see the race started on time this year. This was especially nice since it was a little cold and quite windy. I was shaking at the start and am not sure if from the cold or just ready to run. Dan and I lined up right at the front since that is where they said if you were running 6 mi mile or faster to line up. Hugh was not far behind me.

I felt good and really had to keep watching my pace the first mile to slow down. I was surprised how fast I was starting on a hill on a slippery brick street. At first decided I should stay with Nicole Mello running the 5K and Tony Rigdon running the 10K. Then I passed Nicole and Rodney Atkinson running the 10K caught up to us. I let Tony and him go ahead and tried to maintain about a 5:45 pace. First mile split was 5:50.

At the turn around I see Dan not far behind. I don't remember seeing Jeff so he was probably right behind me. Second mile was right after under the tunnel and split was 6:17. I had to slow down turning onto Maryland since there were a lot of runners headed at me and I had to get through them to get back onto the sidewalk. I was starting to feel just a little winded before Turner Ave and was looking forward to the downhill to recover. Legs still felt strong.

Caught my breath on the down hill and then had some more up hill before 3 miles. Gavin passed me before 3 miles and I wasn't sure which race he was running but turned out to be the 5K. After going up a hill, the last 0.1 mi is downhill and turned a corner right before heading to the finish chute. There was no clock and I stopped my watch.

My overall splits were:

After the race, I ran 6.5 miles more with Dan at 8:20 pace. Hugh ran part of the cool down and cut short. Then we had our post race meal and the awards ceremony.

I felt good after the race and felt like I still had something left. If this course had not so many turns and running on the side walk, I think we all would have run a little faster so a good time for me considering I didn't think this would be a fast course. I think the main thing to run this one fast today was having Jeff and Dan not far behind to push me. 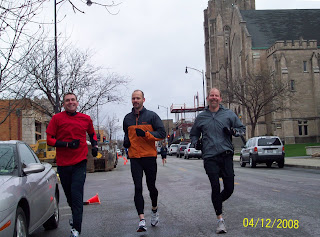 Dan, Andy, and Hugh running the course again after their race. 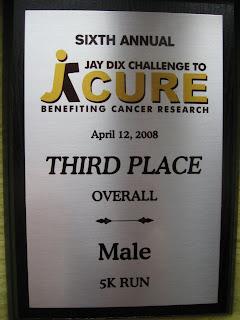 This is my first ever overall plaque. I was actually 3rd overall in this race last year but they didn't give overall plaques. Lucky to get this one as close as Dan and Jeff were behind me.

Results by Division
Posted by Andy Emerson at 2:18 PM

Your cut back weeks are more than most of us do in a month now.

Damn your to fast to race any longer. I still think you can break 18 easily on the 5K.