I wasn’t sure what to expect at this marathon. My goal after running Portland in 3:02:39 in October was to run sub-3 hours which I knew would not be easy. After running 2 PR marathons last year, I figured it was going to get harder to reduce the time. My last 2 long runs (March 9th and 16th) went very poorly and my legs were dead. However, by the end of the second bad week, things had improved a lot and I tapered a little more aggressively than usual (other than the races that I ran the 2 weeks before the marathon). I went out to run 3 miles they morning we left and didn’t feel fresh so decided to stop at 1 mile. I didn’t sleep well so that may have been part of the problem. Since I didn’t know what to expect with the hills on this course, I decided any time between sub 3– 3:10 would be acceptable. I didn’t run a lot of hills during training so probably wasn’t as prepared for the hills as I should have been. Almost all of my long runs were run on flat courses. I had a plan, but remained flexible. I averaged 40 miles per week during training and had hoped to do more speed work than I was able to complete. Since I race so often, I guess that counted as most of my speed work.

We arrived in Cincinnati on Friday afternoon and picked up our stuff at the expo. Saturday evening we had dinner with the LCAR group and went to bed about 8:30. After a pretty good night’s sleep, we were up at 4:30 am (3:30 am Missouri time). It was probably the best I’ve ever slept the night before a marathon. I had a protein shake, banana, yogurt, grape juice, and some water. I received a call from Letty which was nice. I took a short shower, packed the car to leave later, and we were off to the start line at 5:15. We jogged part of the way and then walked the rest arriving about 5:40.

Hugh lined with the 3:30 pacers and about 10 min before the race, I moved to the front near the 7 minute group about 15 ft in front the start line. I wasn’t sure how I felt (other than excited to be there), but I was ready to run. The first mile was not too fast and I held back the pace to keep it reasonable. I wore my Triax pacer and HR monitor to help with the pace. My Triax has not been very reliable recently, so the plan was to use the HR monitor if it failed. For the first 2 miles, it seemed to be accurate and then it was obviously reading a pace slower than I was running so I switched to the HR monitor screen. I also used people ahead that looked like they were running an even pace to pace myself.

I don’t remember a lot of details since I seemed to be more in the zone than I have been when running recently. There were people cheering along the course, but I don’t remember a lot of the scenery. The anticipated hills began at mile 5 and continued through mile 8. They were not that bad in my opinion, but they did slow my pace after the first mile. I let my heart rate increase to 162 on the hills. The total elevation climb was 300 feet. Mile 5 was 6:55, but I slowed to 7:15 for mile 6, and 7:18 for mile 7.

After the hills, at the beginning of mile 8 my pace picked up to 6:45 on the downhill. Several people were asking me if I was the 3:00 pace group since I was wearing 3:00 on my back with my name. One runner asked if I minded if he paced with me for awhile. At some point he went ahead and we would pass each other back and forth for quite awhile. He said his PR was 3:05. I took water at every station except for one where they had the Gatorade second and I missed the water. At the other stations, the Gatorade was first. Usually would just take about 1 – 3 swallows and discard the rest.

I didn’t feel like I was pushing the pace, but running a nice comfortable and reasonable race pace. I would try to pick up a little speed on the downhills, but mostly felt like I was playing it safe. At 13.1 miles, my split was 1:30:52. I assumed that I could not make up 53 seconds (although now that sounds reasonable) and break 3 hours, but thought I had a chance at a PR. At this point, the miles seemed to fly by and before I know it, I’m at 20 miles. I decide to hang on to the pace and there aren’t very many runners near me at this point. In awhile, I do pass a quite a few runners that are starting to slow down in the last segment of the race.

For a brief moment at 21 miles, my legs feel a little dead and I wonder if I’m in trouble. I take the last Honey Stinger and the feeling passes quickly. At 23 miles, I’m wishing I had someone to run with to the finish and I hear a runner behind me, and instead of passing me, he runs beside me and we say nothing. I hear people cheering for us which I appreciated, but I was in the zone I usually didn’t say much other than thanks to most people.

I continue to feel like I am keeping the same pace, but mile 25 my split was 7:35. I did not question at the time, but have since heard that mile was off. My last mile pace was 6:40 and I felt like I picked up speed, but not that much so the mile marker surely was off. I’m guessing mile 26 was about 7:05, which is the same as my 1st mile. I had read at some point during my training this time that one should run the 1st mile at the pace they expect to run the last mile. I guess it worked for me this time.

I felt like I finished stronger than ever before. I’ve never had a last mile split in a marathon this fast. Here are my splits and I’m estimating the last 2 miles:

After having my chip removed, eating a banana and having some water and Gatorade, I waited in the finisher’s area for Hugh to finish. I waited until 4:05 and assumed that I had missed him since he was running with the 3:30 pace group. I checked the reunion area, walked around and went back to the car and left a message. He called about 1 hr later. He finished in 4:22 after having heel pain at mile 8 and his pace steadily got worse. He ran/limped to the end. It is most likely plantar fascitis since he was experiencing the same pain intermittently for the past several weeks and even the day before the marathon. The good news is that I don’t think it is too bad (other than trying to run a marathon with this condition) and he can probably fix the problem with some ice, rest, and stretches.

Today, the day after the marathon, Hugh is walking just fine and I am the one that is shuffling. My left ankle which seems to flare up after longer runs began to hurt yesterday. I guess I am lucky it doesn’t bother me at all during the run. We stopped a few more times than the trip to Cincinnati to get out of the car and walk around. This morning, I could barely walk but by the end of the day, it is immensely better and hurts very little. My quads are a bit sore but other than that everything feels pretty good. I think I will try to find out if my running form is causing the ankle problem. I would really like to avoid the pain if I can. I’m sure I could run slowly today if the ankle wasn’t aggravated.

I’m happy with the result taking 41 seconds off my PR on a more difficult course. I’m getting closer to that sub-3, but still have some work to do. 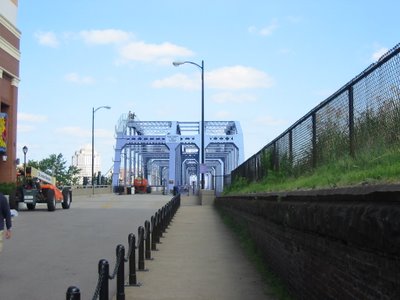 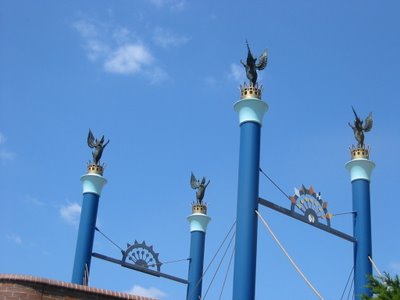 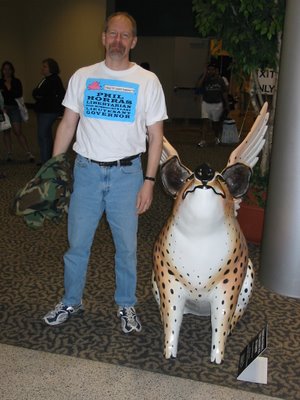 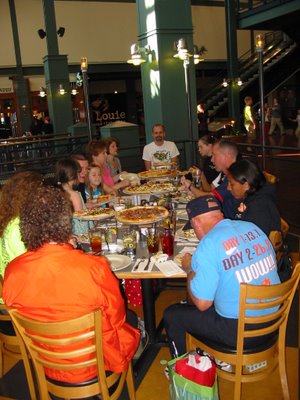 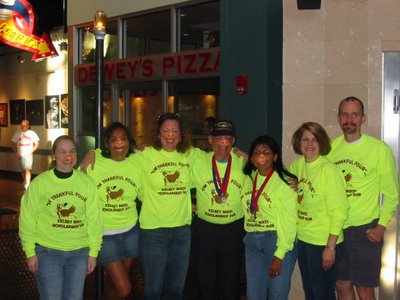 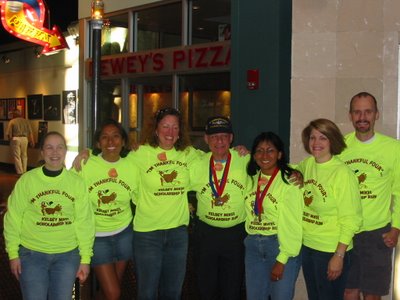 Great run!! You will get that sub 3 the second you step onto a flatter course I would bet, considering how close you are! That really sucks about Hugh's heel, but man, talk about good time considering that 18 miles of it was hurting!! Good job to both of you.

GREAT MARATHON!!!! Don't you just love Cincinnati?!?!? I think you blew some dust my way with those wings on your back! Geez you're fast! Excellent job!

It's so neat to see pictures from the pig...where I live on someone else's blog! Funny!

Hey Andy, Congrats on an outstanding run! You keep getting faster every race...a nice trend that will hopefully continue.

Sorry to hear about Hugh's heel pain. I guess the new shoes weren't a quick fix. I hope his experience didn't sour him on the marathon too much.

Congratulations! The Pig sounds like such a tough course, a PR is amazing!