I signed up to run the Kettle 100K to get prepared for Burning River 100 mile in July.  I like to run at least one 50 miler or 100K before a 100 mile.  I ran the 100 mile at Kettle 2 years ago so I was familiar with the course.  Since I was only running the 100K, I left on Friday.  The drive is normally just under 7 hours, but I took a detour through Iowa to visit my mom so the trip was 10.5 hours counting the visit with her and stopping for food a couple times (Roly Poly in Rockford for dinner).

I picked up my packet around 6:30 and headed back to the hotel in Delavan.  I got everything ready to go and headed to bed at 9 pm.  I had set the alarm for 4:30 am, but woke up an hour early and felt well rested.  Arrived at the start shortly after 5 am and got a pretty good parking spot.  The lot now fills up completely due to the popularity of the 100 miler and 100K  There is also a 100 mile relay and 38 mile fun run.  Also from Columbia running the 100 mile were Johnny and Tom.  Tiffin was running the 100K.

The race started at 6 am.  Everyone was standing back about 10 feet from the timing mat and no one wanted to be up front.  I generally like starting back in the pack a little so I don't start too fast but decided to start in front this time instead.  I was soon passed by many exuberant runners and I started pretty fast myself with the first mile in 8:23.  The temperature was 52 so nice and cool and the first part of the course is pretty fast but still tried to reign in the pace a bit.  I started out with Fizz in the bottle and had one gel and 3 Perpetuem and a packet of Succeed.  At each drop bag that were 15.8 miles apart I had more of the same.

The 100K race has 5 timing mats to cross counting the start and finish and the results are webcast which makes it easier to keep track of the runners.  The first aid station was Emma Carlin at 15.8 miles which I arrived at 2:25:55, 9:14 pace, and 9th place.  I dropped off my shirt since it had warmed up and picked up my supplies from the drop bag.  I ran with a guy on a relay  team for a lot of the first and second section.  He asked if I was from Columbia due to Race for Recovery shirt I had worn had some local businesses on the back.  He was from Columbia as well and a graduate of Rock Bridge.  I didn't know him since he was only 20 years old, but enjoyed chatting with him.  He goes to Beloit College and is now back in Columbia for the summer working in the Physics department at MU.  Part of the course that goes from Emma Carlin to Scuppernong turnaround is grassy meadows in the sun and quite flat.  He led the way through most of that and the pace felt perfect.  Eventually, we parted at an aid station he stayed at longer before we got to the turnaround.

My GPS hit 50K at 4:57 and the 31.6 mile turnaround at  5:01:25.  The split time was 2:35:30 for the 15.8 miles, and 9:50 pace so slowed down 10 min for that section.  I had moved up to 8th place and thought I had counted seven 100Kers ahead of me before the turn around.  My goal was to be at the turn around by 5 hr 20 min so I was a  bit faster.  The weather started off really cool so maybe good to run faster before it warmed up.  I was just a bit concerned the 50K time was my fastest trail 50K (on a course that wasn't short) and 2nd fastest 50K I have run. I can't seem to run even splits in a race where the temperature warms up too much but was hoping to be around 6 hours for the second half.  The temperature got up to about 75 which was quite a bit warmer than we started but could have been far worse as warm as it has been recently.

After leaving Scuppernong I started to have a rough time through the meadows.  The sun was getting to me and my left knee was bothering me.  It felt like muscles were pulling it out of whack.  I would stop to massage and walk a little and it would be fine.  My heart rate felt high at times so I was dehydrated a bit as well. Also, had a bee sting me a little on the finger which hurt for about 20 minutes.  After that happened I kind of wished one would sting me on the knee and then maybe I wouldn't notice the actual knee pain.  Tommy (a runner from MO) and I kept passing each other back and forth as well as a few other runners which were running the 100 mile.  My energy level was feeling very low and I was feeling nauseous.  I was worried it was going to be a long day since this a large part of this section is flat and I was having a tough time.  I decided when I got to Emma Carlin at 47 miles I would stop and try to eat something at the aid station.

The 3rd 15.8 mile section took 3:08:01 and 11:54 pace which was disappointing since the terrain is so runnable but the sun and other issues didn't help. I had moved up to 6th place (at 47.4 miles) so can't complain too much.  I started off with eating some banana and orange slices.  Then I ate several pieces of boiled potatoes (tried for the first time ever) dipped in salt.  Filled my bottle with a Succeed and took off feeling about 100% better and like I could run again.

It was good to be back amongst the trees where it felt cooler.  I also noticed now that the hills were back my knee had quit hurting.  Tommy and I continued to pass back and forth which was quite entertaining.  He was running the 100 mile but had decided he would stop at 100K due to his knee issue and didn't want to risk it.  He is a faster runner than me and it seemed like he wanted to go faster since he would just blaze past me at times but it was only certain terrain that he felt like running fast. I was looking forward to getting to the Bluff Aid station which is 8 miles from the finish.  It goes back to wide trail and have to deal with the Moraines and could often run to the side and stay in the shade since there were some trees.  I wasn't running nearly as fast as early but a decent pace and I felt pretty good.

I made to Bluff Aid station and had more boiled potatoes.  I didn't see Tommy again before the finish, but a couple hundred mile guys caught up to me so the rest of the way I would chase them.  They were walking more hills so would catch them just a little every time there were hills.  The very steep downhills were tough for me to run down so they slowed me down a bit.  At five miles from the end there are mile markers every mile and they seemed to come pretty quickly.  Once the course flattened out more the 2 hundred mile guys got further ahead of me.  I was hoping to finish under 11 hours.  I did hit 62 miles under 11 but still had 0.9 miles to go.  The course is advertised as 63.4 mi and I had 62.88 miles on my GPS.

I arrived at the finish in 11:06:39 (10:33 overall pace).  I ran the last 15.8 section in 2:57:11 (11:13 pace) and it was more difficult terrain than the previous section so I bounced back a bit.  Overall place I had moved up to 5th (out of 55 finishers and 71 starters) and 2nd in Masters (40-49).  The guy that beat me was only 4 minutes ahead of me and at one point I was 45 minutes behind him so I was catching up to him but not quite soon enough.  I am sure I could have saved 4 minutes somewhere!  I got my copper kettle, a plaque for my age group and a bottle opener.  There were a few people taking pictures so hope to have those later.  My left ankle is sore but not as bad as after the Berryman 50 mile 2 weeks ago.  I won't be wearing the Mizuno Ascend shoes again for anything over a 50K. I think they may have contributed to the knee issue due to too much heal since I have been running more in lower drop Innov8 295 shoes.  They also almost rubbed a blister on my little toe which has been an ongoing problem with these shoes for many years.

I waited around with Tiffin (she stopped at 50K due to IT Band problems) at the end.  Also talked to Marty from LCAR that had met I think at Chicago several years ago.  He also helped me fill my bottle several times at aid stations.  He was pacing a runner for the last 38 miles later.  We waited for Tom to come in and he arrived around 6:15.  He was doing great time-wise, but decided to call it a day due to nausea.  Tiffin and I went to the General Store to get food and then came back and we all waited for Johnny.  He came in around 9 pm and went back out and finished in 27 hrs, 26 minutes.  There were 118 finishers for the 100 mile out of 219 starters so seemed like an excellent finishing rate for the 100 milers this year. 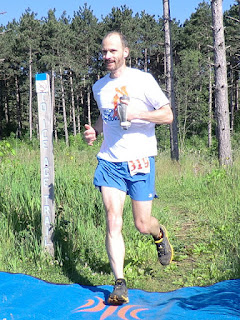 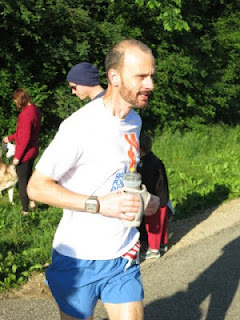 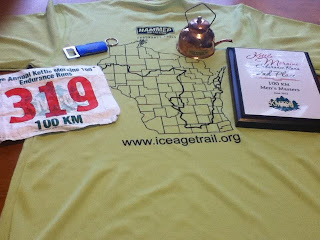