Saturday I ran Big Dog's Back Yard Ultra for the 3rd time. For background info on this race, see my 2014 report where I did a pretty good job of explaining the race and why I enjoy it. I will say my training wasn't that great but I did run 9 ultras and 1 marathon this year so maybe all the racing counted for something. I even ran the same 3 races (Heart of America Marathon and Barkley Classic 50K in September, and Rock Bridge Revenge 50k in October) that I ran in 2014. I guess the races were my training. I did a better job with weight lifting over the summer and let my running slide and went into this race at 160+ lbs, 8 lbs more than usual but felt good. I also scrapped my training plan for the year back in March when I was training for Kettle Morraine 100 miler. It was actually nice not having the stress of a training plan for a change.

I arrived on Friday, setting up camp at race headquarters, talking awhile with a few runners I knew, and then going out to dinner alone since I thought I would try to get to bed a little early since I hadn't slept enough during the week. When I got back, it was a little noisy, but I took a couple Benadryl and managed to get to sleep and it soon quieted down. They had the race clock counting down and I kept hearing someone reminding everyone only so many hours to the start.

We started at 6:45 am to give us more daylight on the last trail loop of the day. 46 starters and the race has a limit of 50 runners but they took a few more. We started off on the first loop. To my surprise, I finished the first loop first in 48:35 which was maybe reasonable other than this year it was definitely warmer. It was in the 60s at the start and got into the 80s later. The trail loops were pretty routine, running at the same times, and walking the same hills each loop. The second loop was 47:36 and 3 through 11 were 48- 50 so all very consistent. Some good conversation on some loops and I ran others mostly alone. I remember loop 6 feeling not that great but the rest went better.

I kept up on nutrition and watched my feet since my trail shoes have been rubbing my heels with the new version of Innov8 - 295s. I alternated pairs and socks for awhile and used the lubrication on my heels. Later I noticed they felt fine so quit alternating shoes. For nutrition I had Sword, Huma gels, and some solid foods. I really wasn't feeling the gels for some reason so didn't use as many as I planned. I wasn't feeling my best on lap 10 so decided to go a bit slower on 11 and hopefully speed up on 12 when it would get dark. I finished 11 about 2 minutes slower than the previous and felt better. I think the temps cooling off helped too.

I am excited on the 12th trail loop since it is the last one until we switch to the road which I knew would be easier and temps would continue to cool off. We were told to take a light but my plan was to go faster and hopefully beat the darkness.  I start off fast on the out and back road section before we come back and get on the trail. The guy ahead of me let me go around him as I started on the trail and I knew I was the first runner. I was feeling good although still walking most hills. At some point into my loop Marc Laveson flies around me. He's an amazing athlete and I watch him climb the hills with ease. He ended up running this lap,  10 min faster than he had been running all day. It was getting dark but I never had to turn on my light. I ended up running my fastest lap in 46:42, finishing second.

At 6:45  pm, we started our first lap (out and back) on the road with 17 runners remaining. I was actually happy to be on the road after 12 hours on the same trail. The road is easier even after running for 12 hours on the trail. I was running with some runners I hadn't had the opportunity to run next to on the trail. She was an excellent runner that seemed to run the laps with ease with plenty of time remaining. I had heard her talking throughout the day although I hadn't run near her that much. She was very talkative and outgoing and seemed to have a lot of energy for as warm as it felt. In case anyone from the race is reading and heard anything I will just mention the conversation turned south (big misunderstanding on her part) but we have since come to an understanding that I think I can live with.

The full moon was very bright and I barley used my headlamp all night other than to check the time. I ran the first road lap in 38:08 which was way faster than I should have but the adrenaline was pumping from the conversation I had at beginning of this lap. When I finished the lap someone said I must really like the road since I finished the lap so fast. I then explained to the race timers what had happened and they confirmed I was in the right.

On the next loop, I decided to calm down a bit and kind of hung behind several runners at first. I never mentioned the incident to anyone else still in the race since I didn't feel it would be appropriate. I finally ended up running ahead and I was probably still not calm since I ran that lap in 39:58. I didn't have a firm plan going into this but felt these were too fast so I decided to try to find someone the next loop to stay behind.

For laps 15 and 16, I ran with Case Cantrell, good conversation, perfect pace for me and it really helped my mood and helped me focus on running smarter. We took walk breaks and ended up running 45s. For laps 17 - 19, I ran pretty well between 42 - 46. I was getting to the point where it was more difficult to drink the Sword and gels didn't sound good. I was able to eat some vegetable soup between laps and had a brat which I have done before and had no problems. I started feeling worse (low energy), and finished lap 20 in 48 but still not unreasonable. Before lap 21 I was feeling pretty yucky. I was eating some yogurt and before I finished it, it felt like it was going to come up so I stopped.  I was feeling a little cool so I put on my jacket for the next lap thinking it might help with my tummy issues. I forgot to grab my bottle. My jacket was too hot so I had to remove and carry it. It was just as well I didn't carry the bottle since I doubt I wasn't sure I could keep it down. I ended up walking most of the last mile although some of it was uphill so would have walked anyway. I just walked more than usual.

I ran 51:50 but was seriously thinking about quitting due to how I was feeling. I decided to try one more effort to save my nutrition assuming that was the problem. I had some more soup and it went down okay. I also had some Sword. I got up with the 2 minute warning sounded for lap 22. I hoped I could finish it and feel better. Unfortunately, I felt worse, walked even more and finished 55:49. I didn't like the direction things were going so waited and went up when the 1 minute warning and turned in my timing chip. Marcy timed out and the other female runner quit too so now there were just 4 guys remaining. I waited until Marcy got back and talked a bit with Case until I said I needed to go lie down.

It took me forever to get out one of my contacts. When I finally got to sleep, it was around 5:30 am and I woke up just before 7 am as the still final 4 headed out on their first trail loop of the day. In the end the winner ended up going 29 hours after everyone else either dropped or timed out. It would have been nice to get 100 miles but I just wasn't having fun anymore after mile 22. I had said before the race I wouldn't drop unless I timed out I guess how I was feeling persuaded myself to stop. 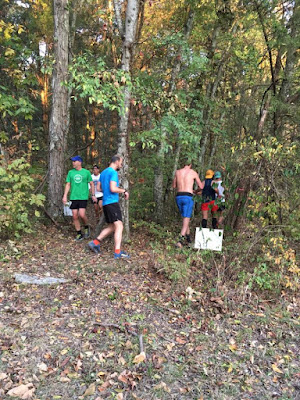 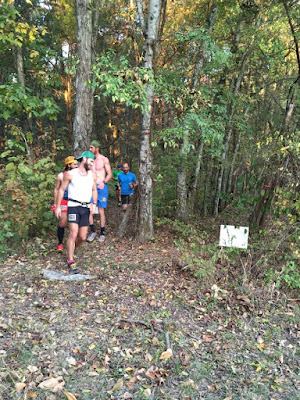 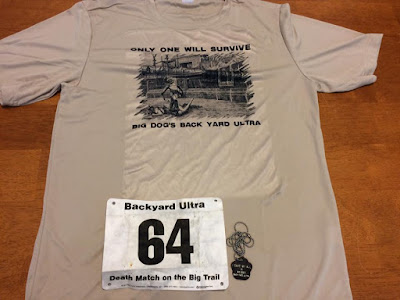 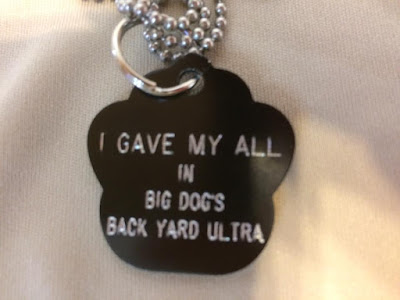