I ran a few miles with Angie and Phil before we signed up.  I wasn't sure what to put down for my time.  It was hot/humid, I ran a 43 min 10K last week, and I wasn't well rested so figured I would be slower than last year's time of 39:39.  Angie predicted 40:30 and Phil and I decided on 43 minutes.  Hugh predicted 50 minutes.  It was quite humid and temperature was at least 77F by the time the first person took off.  The slowest time predicted was 72 minutes so Phil and I waited 32 minutes to start.  There was no danger winning "The Thing" with the time we predicted although I suspected we would beat our predicted time a little.

There were 36 runners that participated. The course is an out and back and somewhat hilly. There were 3 people that chose a faster time.  Phil and I started at 7:32 am. Tony and Nancy, and Angie started behind us. We started off and it was challenging to pace without the GPS we tend to rely so I sort of used Phil's breathing as a gauge of how hard we were running.  We passed a few people on the way out.  We saw Mary Ellen in the lead so she was in great danger of winning.

On the way back I pulled ahead a little, but Phil was never far behind me.  Angie caught up to me and I stayed with for a little while until she pulled ahead.  I passed quite a few people in the last mile.  As usual the end where we have to run a short loop 2 times was quite congested with people nearing the finish.  My sandbagging placement was 12th out of 36, but overall by time I was 2nd with 41:29 after Angie who ran 38:45.  Phil was only 3 seconds behind me.

Mary Ellen did end up with "The Thing" which she claimed she was not trying to win it.  She ran to the race so figured she would be tired and predicted 68 min and ran in 57 min.  Someone had to haul it home for her. 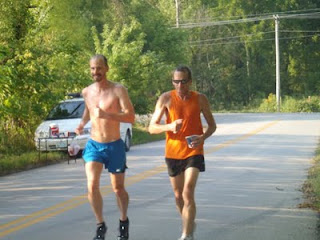 Andy and Phil at turnaround point