Today was the 13th Annual Dog Jog 5K Run sponsored by the MU College of Veterinary Medicine Class of 2008. Hugh is out of town so only one dog could participate. Rusty has only missed this race once since 1997 so Rusty had seniority and Bruno stayed home. When it was time to leave I slipped Rusty into the garage when Bruno wasn’t looking. Up to this point, I’m not sure that Rusty suspected that we were going to a race. I had placed his leash in the car last night when the dogs were in another room.

Once we arrive, I left him in the car and retrieved our race packet and used the restroom. We had about 30 minutes to socialize with dogs and humans before the race began. It looked like a good crowd for the race and definitely a lot more people than 2 years ago. Pretty good considering there were 2 other 5Ks in the area going on at the same time today.

Rusty is a 4 time dog jog winner (1st male with dog) since 1997). Last year I was out of town so couldn’t run the dog jog. We did run the 5K Paws in the Park in May, but were beaten by a faster guy and dog. I really didn’t expect that we would have much of a chance of being a 5 time winner since I had to pull him the last part of that race.

Mike, and his dog Riley, from the Tu/Th running group was there so I favored him to win since he runs a fast 5K and has a dog that always seems to pull him. At this point Rusty is quite excited and barking. They lined us up and told the runners without dogs to get in front. I think this is a mistake at dog races and think it is better to line up according to speed regardless of whether the person has a dog or not. As I expected, the faster runners with dogs, had to break through the crowd at the beginning, but Rusty and me were up front with the lead dogs and runners.

The first turn came up quickly and at this point there were 4 runners together (3 of us with dogs). I glanced at my instantaneous pace on watch which said 6:09/mi. The runner in the lead was a female with a dog. Her dog was biting at the male runner beside her without the dog and also biting at Rusty and me and blocking us with the leash. The dog wouldn’t let us pass her. I moved over farther into the street, but her dog followed. It seemed like they were trying to run me off the course. Then her dog would go back and try to run the other guy without the dog off the course.

We had to cross the road using an overpass. The girl with the dog (she called it Elly), cut right through the landscaping and headed up the steps to the over pass completely bypassing the ramp we were probably supposed to take. Those of us with dogs pretty much had to follow. Once we crossed the road, Mike and Riley came up behind me and I told him to watch out for that dog.

Then Elly wrapped herself around a tree so we raced ahead and I noticed Riley had been distracted by a squirrel so we passed her as well. With so much going on and no one at all of the intersections, it was difficult to know where to turn. Fortunately, the no-dog guy knew the course and we followed him.

After wrapping herself around the tree, the dog from HELL-Y passed us. Then at the next intersection they cut through a circle drive instead of going on the road around the cone. I tried to stay on the sidewalk if Elly was on the road. If she was running on the road, I would move to the sidewalk. I was desperately trying to avoid her. She was gaining on us so it was becoming less of a problem, but I don’t think I would have dared to pass her. Rusty was just running straight ahead following beside me as I had to maneuver through all of this. He actually pulled pretty hard the first mile or so and then just stayed with me. At one point, Elly was running in the road and the guy without the dog was on the sidewalk. There were cars between them and she wanted to dart between the cars to get him. The dog seemed to pull more left and right than straight ahead. She was fast and had a fast owner, so stayed in the lead. I’m sure she could have gained the lead more if she would have worried more about running straight ahead than trying to run other dogs and runners off the course.

We raced ahead. There was no time to get splits today but pace still looked good at about 6:23/mi and we had about 0.6 miles to go. We crossed the road we crossed earlier except this time didn’t use the overpass, but there was someone to watch for cars. Elly and her owner at this point were a good distance ahead and I didn’t have to worry about being bitten or tripped. Mike and Riley passed us, but I stayed right behind them. Then the final turn to the finish line, he had pulled a bit ahead of me. I decide we are so close that Rusty and I need to make a move. He wasn’t pulling me so I didn’t know if he could keep up which is one reason I waited until near the end to see. I felt that I a kick left in the end and hope he would too.

I sped up and we passed Mike and Riley. Then a few seconds later crossed the finish line at 19:35. Mike and Riley were right behind us at 19:36! The first runner to cross was without a dog was about 19:12. Elly and her owner were about 19:17. I pushed so hard at the end to pass and stay ahead of Mike and Riley so I was really out of breath.

The prizes were the best I’ve ever seen at a race. They gave various gift certificates to the top 3 for the walkers, male and female without dogs, and male and females with dogs. Rusty would bark as if he were cheering each time one of the runner's with dogs won something. If people clapped, he barked. Rusty and I won $160 of Andy’s Frozen Custard (52 of them!), a Walt’s $45 bike tune up, and dog treats. Those prizes were so great I could hardly believe what I was hearing. Then I took Rusty to the dog park to run free, swim, and fetch a tennis ball. I had Andy’s Frozen Custard on the way home. 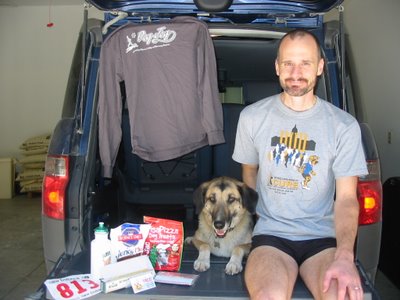 ok, so I gots some dog running questions:

2) do you run your dog on pavement or only on trails?

Rusty started running at 4 months, but you just need to limit their
distance, run their pace, and take walk breaks if needed.

My dogs mostly run on gravel. Rusty used to run up to 8 miles when he
was younger and now usually runs about 3 mlies. Non-pavement is
better for their paws. Watch the paws for signs of wear. If you do
run on pavement, avoid hot pavement.

I do let him lick the container. It is for 52 concretes so he'll have
a lot of licking.