Cold but beautiful morning for a race.  It was in the 30s when we woke up but low 40s by the time the race started at 9 am.  I ran the 5K course with Hugh before the race as a warmup.  The extra for the 10K was on the MKT trail.  I was overdressed for the warmup so by the time the race started I was ready to shed some clothes.  I wore my long sleeved Pumpkin Holler shirt, shorts, orange racing flats, and black and orange Sock Guy 3 Days of Syllamo socks. Everyone walked out to the road for the race start.  I heard some guys talking about running 35 min so wasn't sure I was standing in the right place and there were also 5K racers.  Since the race offered money for the top 3 male and female 10K winners, most of the really fast guys/gals were running the 10K.

The course started off pretty flat and after about half mile heads up a pretty good hill (up 100 ft) for a half mile.  The fast 10K runners were in the lead.  Katie was just ahead of me and I knew she would run faster than me so did not try to keep up and kept my goal pace.  Tony was running the 5K and we were running close until he passed me after we got up the hill.  My first mile split was 6:15 which was right where I wanted to be overall but figured the first mile might be slower due to the hill.  The next part of the course is pretty flat for just over a half mile and then goes downhill for about three quarters mile, and then on the flat MKT trail at 2.3 miles. Once on the trail Brad running the 5K caught up to me before the 5K finish.  I passed a guy that seemed like he was tiring out and then next thing I know he is surging ahead and passed me as well as Brad before the end.  The first three 5K runners were fairly close.  I believe the winner was about 19:10 so I wasn't far behind.  My first 3 miles were 18:31.

From this point, the course went out just over 1.5 miles on the trail and back.  Since I no longer had any runners close, I had to push the pace on my own.  I was holding a very steady comfortable pace that seemed closer to a 5K than 10K pace.  Before the turn around I got to see the first 6 runners 4 males and 2 females coming back.  The turn around slowed me down a few seconds.  Then I saw the runners coming out so that helped to see them.  I knew the pace I was running that I was probably going to PR.  My finishing time was 38:31 so an 11 second PR.  My last 10K PR was in 2008 on an entirely flat course.  In spite of the hill and the turnaround I felt like this was a fast course too and could probably go a little faster on it.  I placed 7th overall and 5th male.  There were over 100 runners registered between the 2 races and 39 finishers for the 10K.

After the race there was plenty of good Halloween candy, bananas, bagels, and bars to eat.  Then the awards ceremony at about 11 am.  The first and second overall guys ran 35-something and were in my 40 - 49 age group.  I ended up winning the 1st place males Master's award which included $50 cash which was a nice surprise.  Hugh won first in his age group in the 5K.  There was also a drawing for numerous prizes which we were allowed to pick a prize off the table.  I won a $15 Kostakis Pizza gift certificate and Hugh won a lunch at Honey Baked Ham.

This was the second year for this race.  I was not able to run it last year.  It was extremely well-organized and had a lot of support and sponsors.  This race was to benefit the More Project.  Pictures are on the Prevent FaceBook site. Race results at Columbia Track Club. 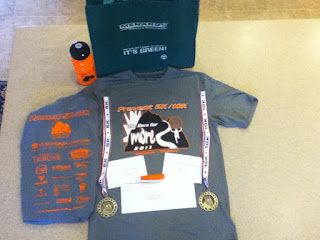