We arrived at packet pickup at 7:20 am. Temperature was almost 60 F so the warmest Truman 5K I can remember.  We picked up our packet and received a water bottle instead of a shirt.  We had planned to run a couple miles to warm up rather than run the entire course this year since we didn't have time to do the whole course.  We thought we knew a short cut back to the start so turned down a road to take it, but ended up being 3 miles so we had about a minute to rest before the start. I had hoped to get a drink but didn't have time.  Also, didn't have time to take my shirt to the car so left in the ditch by the stop sign at the start.

I lined up in front but as usual about 20+ people spring ahead of me going out so fast like they are running the mile.  I was trying to keep below a 6 minute pace for the first mile.  I ended up passing over 10 people that were breathing way too hard for the first mile.  My first mile split was 5:57.  I passed a few more people at the start of the second mile.  This is a hilly course and the worst hills are in the second mile so I slowed down up the hills a bit.

Ran the second mile in 6:08 which was decent considering the hills.  By mile 2.5, I was feeling those hills I had just ran.  There were some guys now close behind me which keeps me pushing myself.  I kept pushing until the next to last turn and then these guys start to sprint so I kick up the pace even more, but they still pass me just before the end.  Finished 3rd mile in 6:05.  Last 0.1 was 5:20 pace. I beat my best time on this course by only1 second! 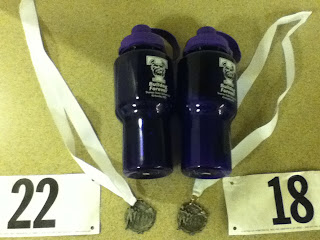 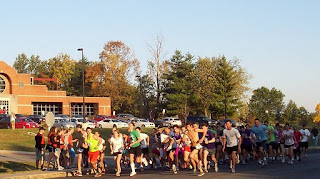