For those looking for results, see 2009 Roots 'n Blues Results

This event was convenient since I got to run a half marathon and less than 10 min drive to the start. It was lightly raining this morning and temp around 59. Hugh and I took separate vehicles since he was volunteering and we didn't know if he would need a car. He worked at the tunnel near the Stadium so ended up walking. I headed to the porta potties and there were plenty of them due to the Roots 'n Blues festival. Very nice that I didn't have to wait. Then went out for a warm-up and it started raining a little harder.

I lined up in the front in front of the 1:30 pacers, Tom and Jackie. My goals was to run about 1:27, assuming the course would be accurate since this was a new course so did not know. The course was quite hilly in the second half so did not expect to break any PRs today. Started off pretty fast and had to watch my pace. Once we spread out I passed one guy during the first mile. It had felt like I started more for a 10K than a half, but first mile was not too bad at 6:28. Any miles under 6:30 were a bonus since my fastest half pace is 6:30 in Sedalia, a much flatter course.

I skipped the first water station since I had ran just over a mile. I was passed by a guy flying down the steep hill to Providence. The roads were wet today and slippery so I was glad I decided not to wear the racing flats. After Providence, we got on the trail at the tennis courts at around mile 3. Pace felt good on the trail and kept the pace sub-6:30. I passed the guy that had passed me earlier flying down the hill. Took my first gel at about 30 minutes. Several of the Uprise runners cheered me on as I ran to Twin Lakes. The timing was perfect.

The halfway point was just as we turned onto Chapel Hill to go up a significant hill before turning onto Fairview. Split was around 42:15 at 6.57. The mile that included the hill was not too bad at 6:42, and then 6:48. After I got back on track with 6:30 pace with some up and down. Saw Phil on the course and he thought I was in about 6th place and Stephen B. was ahead. The course went onto Fairview and down the hill we had went up earlier. I got to see a lot of runners on this part of the course for about a half mile. Then up Chapel Hill to Mills Dr. This seemed like the worst hill for me and this mile was 7:03. I did seem to recover quickly after the hills.

The course then crossed Forum to go down Stadium and back to the trail. I had been slowly gaining on Stephen and could see another guy ahead of him. With only 2 miles to go and no more hills, I was ready to pick up the pace. We crossed under the trail on Stadium Blvd. I wasn't sure if we were going over or under but Stephen went under so I followed. The water was about ankle deep. Shoes were already wet but now they were thoroughly soaked. At this point it had nearly stopped raining. Shortly after mile 12 which I ran 6:14, I passed Stephen. I still could see the other guy ahead. I kept the pace going. I was running past a lot of the 10K runners so it was getting kind of crowded at this point. Ran the last mile in 6:20. I probably could have run faster since this didn't hurt at all. Half marathons are supposed to be more painful than this due to the faster pace so it was nice to feel good.

At this point, I knew the course was probably a little long since we weren't close to the finish. They had us cross over the road on Providence rather than use the tunnels due to the water. I couldn't quite catch the guy ahead of me before the finish. My GPS had 13.38 miles, 1:27:10 which was close to my goal even with the bonus distance. I was given a finishing glass at the end which I was a little worried I would drop since I was wet so I gave to Hugh. Soon, we see someone had dropped their glass. Bags might have been a good idea.

Hugh gave me a dry shirt and then we walked back to the car and I changed out of all my wet clothes. We went back to the finish, and checked the results several times and ate some food. The result postings were kind of amusing. They would post sheets and then post the same sheets with updates. The first sheet had my time at 1:27:15 and Stephen at 1:06-something. The guy ahead of me was at 1:27:14. I know Stephen started at the front so couldn't have been that much of a difference in chip time. Earlier I heard them call his name to report so figured there was an issue. Next results had him at 1:27-something. Later I checked and I was at 1:27:13 (2 seconds faster) and 9th place, guy ahead of me at 1:27:08, and Stephen at 1:26:55. Also, the overall winner of the half had changed. Then the results they posted on the web site changed yet again and were 1:27:05 for me and now 7th place and Stephen got faster too at 1:26:49. Since the improvements were not equal for everyone, it all seems kind of random.

There were also some issues with getting some of the 10Kers mixed in with the half results. I am not sure how this happens, but I am sure they were doing their best. I am a bit perplexed how my overall time changed at least 4 times. I do think all the possibilities were close, but I am going with my GPS of 1:27:10 as my official record. I placed 1st of 22 in my age group. Awards were wine or grape juice and a hat. I took a bottle of Les Bourgeouis grape rather than wine. The winners for each age group posed together for pictures. Also, they kept repeating some of the results since they kept changing and some of these people had to go back on stage and different people had to go up in some cases. Even the overall male winner was incorrect the first time. I guess a good thing they weren't giving out plaques today. That would have been a big mess! I do know my age group result is correct. Overall, I think I placed 6th of 653 rather than 7th. Either way, not bad for hilly half marathon and 6:31 pace for 13.38 miles.

There were 653 running the half and 306 running the 10K so they had a good turnout holding this in conjunction with the Roots and Blues festival. Overall a fun race, a few bands along the course, great spectators and volunteers that came out in the rain. 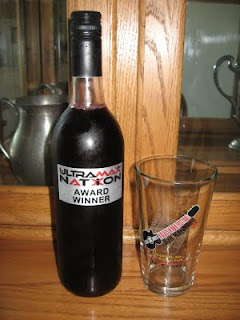 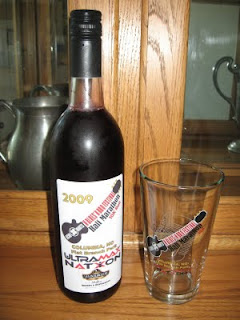 Great Race! It was a blast and my First Half Marathon, I was happy just to cross the finish line. Your time is amazing great work!

I just stumbled across your account of this race - my Garmin said the race was a little too long, too. My number is slightly higher because of my slight detour at the Twin Lakes park - I was a tad over-hydrated. :-)