This marathon was a new challenge for me since this is the first time I have attempted 2 in 1 week, 6 days apart. I left Columbia on Saturday afternoon to head to packet pickup at Fleetfeet in St. Peters. Took a brief survey on leg pain while there and will be e-mailed followup surveys. I then headed to hotel to check in. The hotel was half mile from the start line on the east side of the river. Around 4 pm, I went down to St. Charles near the finish on the west side of the river for dinner with some running friends from out of town. We ate at the Trailside Brewing Co. and then went back to Jan's hotel where we had her yummy cheesecake. She made and transported all the way driving from Mississippi. Laurie and her daughter Tess were at the same hotel as me so I drove them back. I set alarm for 5 am and went to sleep at 10.

I woke up at 4 and didn't really sleep the last hour. I had a Myoplex with coffee in it and 2 bananas. I had plenty of time to get ready, take my pre-race shower and use the restroom multiple times. I headed over at about 6 am to the start. The race didn't start until 7:15 am. I talked to Tom W. briefly who also ran HOA last week so I wasn't the only crazy to attempt this feat of 2 marathons in one week.

4480 finished the half and 688 finished the marathon so there were over 5000 people at the start. I found Jan, Kevin, and Bill in the parking lot and we all wished each other well. I decided to go back to the bathroom at the far end of the parking lot away from the noise and chaos. I waited about 25 minutes just in time to head to the start line at 7 am.

Having no idea how fast I could run this, I had to rely on faith. I felt really good, had no pain or issues from the last marathon, and I thought this was a pretty flat course which might help. Temp was around 60F and humid. The sun was out so I was a bit worried it would heat up. I lined up just ahead of the 7 min pace. There was also a 6 min and there was such a large area and barely no one in it so we all moved up and I was probably about 10 ft from the start line. I decided I would attempt a sub-3 but today was not the day to attempt a PR. I hoped to keep the pace around 6:45 and see what happened.

The first half was on roads with the half marathoners at the same time and the last 13 on the MKT trail. Pace was very consistent for the first half. I noticed that about 8 miles I had some people from the half marathon passing me since they had picked up their pace and then about 10 miles, I was passing the ones that were slowing down. It was funny hearing some people say almost there, not realize I was running the marathon. There was no way to tell who was running what race based on our bibs, but I could kind of tell those breathing harder were running a half. In fact, later I determined that everyone around me was running the half.

I completed the first 13.1 at about 1:28:30 and 6:45 pace, right on target and realized I had a chance of a PR if I could run the second half about the same. I had to pass by the finish chute which I thought would be hard, but since the largest crowd was here, it actually helped. Once I passed, the announcer said something like, looks like he wants to do another 13 and I looked strong. I was told I was in 6th place. My goal was to finish in the top 10. There was not anyone close behind that I could see once I got on the trail. There was a guy not far ahead that I passed early on the trail and then had people telling me I was in 5th place.

The trail part of the course was flatter than the road and boring. It wasn't much different than running on the MKT in Columbia. A lot was in the shade which was good since at this point, it felt much warmer. The parts in the sun made me wish I had not worn a shirt. I felt like I was out for a run alone until I would reach a water station and there were a few spectators. When I was at about mile 17 I think, I met the first marathoner, James Cheruiyot, coming back. I don't know that he is related to Robert but he was fast. I started counting and I was indeed 5th and hoping I could maintain about that position. Tom W. was in 3rd which was good to see he was having a good race. He also is in my age group so that improved my chances in age group since there is a top 3 overall division. I saw him around the 20 mile marker so I was about 0.7 mi behind him. I made the turn around at the 19.6 mi. The running out seemed to take forever so I was glad to turn around.

Running back, I got to see lots of people and get encouragement from other runners. Our race numbers had our names printed so I heard my name a lot. This made the time seem like it was going faster on the way back. I was feeling really good until about mile 21. The heat was starting to get to me although I still felt good. Legs felt good but body was saying slow down. My pace slowed and I really had to really focus on running, trying to keep the pace, but not go too fast and blow up. I rationalized that if I could keep at 7 minutes I would still finish under 3 hours. I had changed my GPS today to see my overall time rather than the mile split field which was much more useful. A different guy than the one I passed earlier goes blazing by me around mile 22. Mile 23 was 7:05 and then managed to run mile 24 just under 7. By mile 25, I was ready to be done and slowed to 7:13. I wasn't worried about being passed and wanted to be done. Mile 26, ran in 7:10 and then picked up the last 0.35 with the crowd to 6:48 so I had a little left, but not as much as Heart of America marathon. Finished in 2:59:38.

Once I stopped, I felt a little nauseous for a couple minutes and then suddenly felt really good like I could go run more, but slower. A couple introduced themselves as Mike and Elaine from Ashland, that ran the half recognized me over where they were taking finishing pictures. I had my picture taken and then went through the food line. I went over to the finish shoot to watch runners come in for awhile and then watched the awards ceremony for the top 3 overall for each race. Tom W. was third overall. James was 2:31 something I no one was even close. I think the rest were in the 2:50s. Tom was about 4 min ahead of me. The age group awards will be mailed in a week. I ended up with the first place in my age group of 74 people since Tom won an overall award.

I headed back to the hotel around 11:25 on the shuttle bus since I had to check out at noon. They took us back to the start so I jogged back to the hotel, showered and checked out at 11:57 am. I sat in the lobby to check e-mail and call the group. I finally get Kevin. Jan had to head home right after, but got to talk to everyone else. They were going to do a bit of sight-seeing in the afternoon. I went in search of food since I was getting a little hungry. Ate at Culvers since I was craving a concrete. Had a double cheeseburger and a pumpkin pecan concrete. The 1.5 hour drive home seemed to go very fast and legs seemed happy.

Overall, this marathon had good organization and at $55 was not too pricey. It would have been nice if they had some sort of Expo as the packet pickup was at the various FleetFeets in the area, but they are the major sponsor so understandable.. The first half of the course was not bad. There was even a stretch where you could see other runners on the other side of the road where Jan yelled for me. I would have preferred the last half on roads rather than the fine gravel MKT. Mostly the running out to the 19.6 was long and lonely. It is almost like the marathon was an afterthought for this race, but I do feel like it is a fast course even with the trail. I think a full road course might get better participation. The finish area was great and there was plenty of food. There were sparse crowds along the first half and a lot close to the finish. Spectators were very few along the trail. The volunteers though were plentiful at the water stations. I am glad to have run the marathon and most importantly I did have a good time. Once again, I have proved to myself nothing is impossible or maybe I just get lucky sometimes. Stubbornness helps too. Also, I feel like I have a good chance of running another marathon PR at some point which I will try only on a week where I have not already run a marathon. 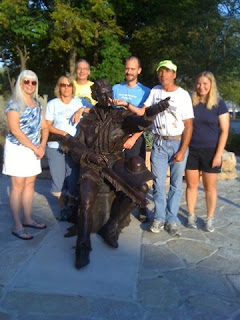 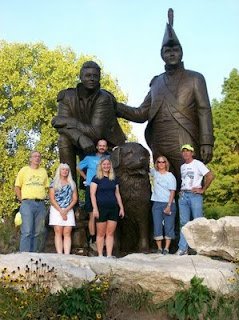 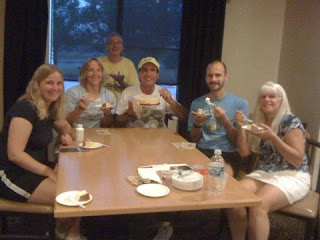 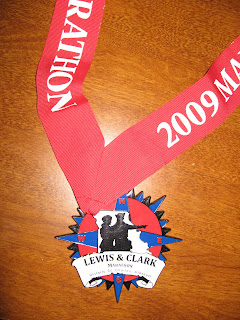 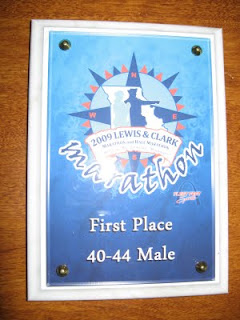 Andy great post congradulations on your times and great to meet you at the lewis and clark marathon.
Kevin from Nu Joesy