This was the third time I’ve run this race. It is organized by the Long Run Lunatics that I run most of my long runs with on Saturdays. The race benefits orphaned children in Burkina Faso, a tiny country in western Africa, considered to be one of the poorest in the world. Some of the proceeds also go to local African refugees. I picked up our race packets on Friday so we didn’t have to pick up race morning. Packets contained candy and one had an umbrella and the other a water bottle.

I had planned to go run the course ahead of time, but instead we decided to run a mile with the dogs first. By the time we got to the race there was only time for me to run another mile and I also quickly used the bathroom at Hardees at the beginning of my mile. Temperature was perfect and I think around 60F when we lined up on the start. This was around 15F cooler than last year. I felt good, but figured coming off 2 marathons (Sept 7 & 13) in 1 week, today was not the day to set a PR. I did hope to at least set a course PR and run faster than 18:43.

There were about 5 of us that took off in the front group and I did not hold back as we were running downhill at the beginning. I was running close to a guy wearing a San Diego half marathon shirt. I noticed him before the race and thought he looked fit and fast. I also thought he might be in my age group and possibly older. Once we got to Stewart Road, I was running a 5:49 pace and the rest of this group was pulling ahead. I decided my pace was fast enough and let them go. This pace was faster than any I have ever tried to maintain in a 5K. The course goes up about 100 ft elevation in the first mile. However, I didn't feel like this hill was any problem for me.

The second mile is a little rolling and not bad. I decide I will try to maintain a 5:49 pace and see what happens. Just before mile 2, the elevation drops drastically, about 300 ft, and I am seeing 5:30-something. Mile 2 is just as I turn to go on the trail and split was 5:49.

Third mile is on the trail and I am hoping I can maintain the sub-6 pace. I could no longer see any runners ahead of me at this point. The trail just slightly increases in elevation the last mile. My pace slows and GPS is a bit erratic so I am not sure exactly the pace. I did feel like I was slowing though. A guy passes me about half mile from the end and I decide not to try to stay with him. I am really ready for the race to be done. Then I heard breathing behind me, and sounds like a girl. I pick up the pace just a little.

There is a series of tunnels near the end and I can hear her right behind me. This is not where I enjoy being passed in a race by anyone. We go up a small incline and then flattens out and we are near the end. I hear her footsteps pick up the pace so I see if I have anything left. I sprint all out and hear her coming faster for me so run harder and make the finish line. She finishes one second behind me.

The last mile split was 6:17 and the last 0.1 was 5:23 pace. Overall time 18:23, a 20 second course PR, and an 8 second 5K PR. Thanks to the girl behind me, I somehow managed to get a PR even with my disappointing slower last mile. I feel I could have pushed harder, but just didn't want to make it hurt that much and maybe wasn't focused enough. The PR was still a nice surprise and I placed 5th overall of 98.

Hugh had said he wanted to run 22:30. He crossed the finish line exactly 22:30 and 12th overall. We both ended up with second in our age groups. The guy from San Diego was 42 and in my age group. There was a drawing for prizes at the end. I won a Dunn Bros. coffee gift bag with a stainless steel travel mug, ceramic mug, coffee, some truffles, and biscotti. 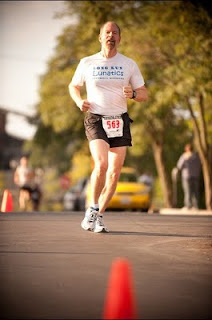 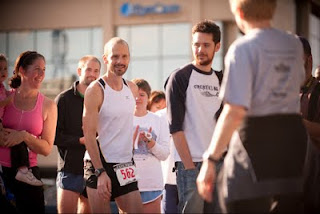 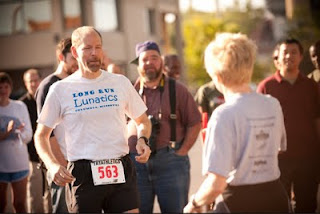 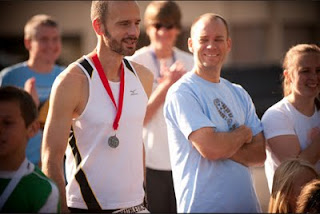 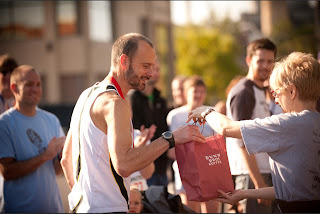 Andy (one of the lucky door prize winners)
Posted by Andy Emerson at 10:01 PM