It was the warmest day so far of the year with a high temp of 81 today, but only around 60 at the time of the race. We arrived about 7:15 and planned to do a warm-up around the course. After a mile, I felt pretty good, but didn’t push it too much and stayed with Hugh for the warm-up. Total 5K warm-up time was 26:35. After the warm-up, we put on our new race number belts that we purchased this week. I consumed an Energice and a regular Mint Honey Stinger and then we checked out the bathrooms one last time.

There were 595 finishers, up from 540 last year. I lined up very near the front since last year I placed 24th overall and second in my age group. Before leaving for the race, I read Chris’s race strategies again and the thing that seemed to stick with me most today was “embrace the pain”. The last minute, I decided my strategy was to go ahead and try for an 18:45, thinking I’d fade quite a bit in the last mile, and still beat 19:43, my best time for this course. The first mile felt great and a couple runners that are normally with or ahead of me at that point were still behind me. Being beaten by the same people so many times, it’s pretty easy to gauge whether you are running faster than usual. First mile split was 5:54.

The second mile started off pretty good but then I had to start pushing a bit to keep up the pace. I was afraid to push too much, thinking I would be in trouble in the 3rd mile. Near the end of the 2nd mile, I was slowly gaining on a guy that seemed to not want me to pass him so I stayed behind him for a bit. My second mile split was 6:13 which I thought was not too bad for how I felt at that point. I was tired of hearing the hard breathing of the guy ahead of me so I caught up to him and passed him for awhile, and then wondered if he was in my age group or not since I did not know him. At about 2.25 miles, he pushed ahead of me and I decided to let him go. At 2.5 miles I hear another runner coming up behind me, thinking it was one of the guys that normally place ahead of me. However, I think it was a cross-country high school runner and she seemed to fly by me like I was standing still. I didn’t even try to stay with her but told her “good job.”

At this point, I’m thinking hang on until the end, and “embrace the pain”. I kept pushing and my 3 mile split was 6:02. The last 0.1 mi is up a hill. I was thinking that the 2 guys that are normally ahead of me were probably right behind me, but I never looked back. I pushed hard and noticed the clock said 18:48 so I pushed even harder to get less than 19 min. The last 0.1 mi, I ran in 45 sec with an official time of 18:54. The other guys were 14 and 40 seconds behind me. There was one runner only 4 seconds behind me.

My time is 49 seconds faster than my PR for this course and only 4 seconds off my PR for a different race course in 2003. I’m very pleased with this time, considering some of my training the past few weeks with the painful ankle, and tired legs. Also, I’m pleased that I improve this time while training for a marathon.

I placed first in my age group this year! The next closest person in my age group was 19:55. I placed 8th overall and even got my name in the paper. I had no idea that I placed that well. I wasn’t really paying attention to how many people were ahead of me. The winning time was 15:46 so there were some people quite a bit ahead of me. Hugh's time was 21:09, 2nd in age group, and 48th overall and he beat some guys that he does not normally beat. I'm thinking this might have been a PR for him. After the race, we did a 5K cool down in 28:37. The great thing about running the course before and after is that you can take time to enjoy the sights where I can't usually do that while running a 5K. Race results are posted at http://ctc.coin.org/results/stpats/2006.html 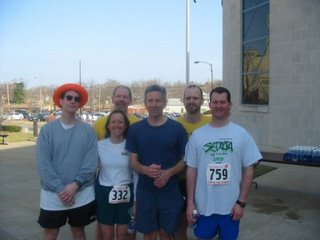 Mid-Missouri Road Runners at the 5K 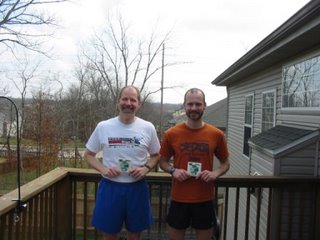 Hugh and Andy with our coasters
Posted by Andy Emerson at 2:05 PM

Great race Andy. Tell Hugh the same. You two are getting very fast!

By the looks of your pics with the coasters, Hugh looks like he's lost weight since last year. Has he?

He has. I'm about ten pounds lighter.