I wasn't sure I should run this 50K.  I was really tight and painful most of the week and didn't run since the Sunday before.  I contacted the race director to see if I could switch to the 10 miler which started later, but he suggested I could start with the 50K and 20 milers and then drop to the 10 if I wanted after the first loop.  This way I would get a better parking spot.  I mostly wanted to switch since I didn't want to DNF for the race I had signed up for and knew I could run 10 miles.

I set the alarm for 4 am, but slept poorly and got up at 3:45.  Hugh had gotten up and baked cinnamon rolls so had those along with cereal and hard boiled eggs for breakfast.  I wasn't as tight and painful as I have been recently, but I think that was due to not sleeping for very long.  I was hoping the drive to Kansas City would be pretty comfortable.

I left about 4:40 and made it there at 6:50 just as it was getting light, got a really close parking spot and was the 3rd person in line to pick up my packet.  We got a nice brown hoodie instead of a shirt this year.  I returned to the car to get everything ready for my drop bag and took it over to the start and then back to the car to figure out what to wear.  I realized I had forgotten to bring Body Glide but turned out to not be a problem.  I decided to wear my Mizuno pants, a long sleeved shirt, and jacket.  It was 23F and just felt too cold to start out in shorts.  I decided to wear my iPod since I was afraid it was going to be a long day if I decided to go for 50K.  I put my Kahtoola Microspikes on my shoes and was ready to go.

Dan H. came over to borrow my Swiss Army knife to loosen a few screws on his shoes.  I then headed to the start line for the 50K and 20 mile.   Saw Joel running the 50K and Shawn, and Nate running the 20 miler from Columbia.  A lot of other Columbians running but doing the 10 miler which started an hour later.  I started sort of mid pack and we were all running single file on the snow path on the way to the trail.  The trail was snow packed and pretty good to run on.  Definitely better than the mud I've run on the previous 2 years.

Into the run, I realized I had left my water bottle in the car.  I didn't worry since I would just drink at the aid stations and grab the other water bottle that was in my drop bag on the second loop.   I stopped at 3 different aid stations to drink so probably wasn't enough with their small cups.  I felt like my right leg was dragging a lot the first loop and couldn't seem to keep my right ankle steady.  I thought my shoes felt a little loose, but had a hard time tying them in the car since I can't bend over very well.  I was getting warm too and removed my gloves.   About 8 miles into the loop when I was running with fewer people I turned on the iPod a bit.

After I finished the 1st loop (1 hr 54 min), I took off my running pants and jacket.  I felt up to another loop, grabbed my water bottle, some food and took off.  I didn't get far and decided it was time to retie my shoes.  I found a tree and was able to prop my foot up and retie them.  It was much better and my ankles felt more stable.  Soon, I felt like my head was burning up so removed my head band.  The iPod was starting to hurt my ears which it usually does after a few hours so had to take it off and carry it along with the headband since I didn't have any pockets.  There were a few patches on the second loop that were icy and quite slippery where the snow had worn down.  There was one place on a steep down hill curve that I about lost it and fell backwards, but managed to catch myself and didn't go all the way down.  The Kahtoola microspikes worked quite well other than on the solid icy patches.  They were a bit of a pain running across a few roads and where we had to run about a half mile on the road, but I am glad I wore them.  I really didn't want to take a chance at falling.

After 2 loops (4:06 overall time), I decided I could finish and my goal was to simply finish since I didn't have any speed.  I had almost 5 hours to finish the next loop so decided there was no reason not to finish.  There was a big cheering section from Columbia that had finished running when I came through which was nice.  I started the 3rd loop feeling okay, but no speed and no power up the hills.  The trail was beginning to be more slushy in places and even some mud in a few places.  After a couple miles, it appeared I could do 15 min miles so hoped to finish in about 6 hr 40 min overall.  Most of the 3rd loop I was running alone other than being passed by people.  I did pass a few people but was mostly passed which I don't like, but nothing I could do about it.

I made it to the end in 6 hr 43 min and the race director gave me my medal and 50K sticker and I had my picture taken. It was quite toasty at 52F by the finish!  I am glad I did this run, but not happy with my time even though I realize there is not much I can do about that right now.  I had been running really well in spite of my bulging disc for about a year.  The weird thing is running excessively does make me feel better while I am doing it and loosens things up. Exercise is good for sciatic nerve pain, but getting up every morning, trying to put on my clothes, getting things off the floor or down low, and sitting is hell. For over a year, I didn't hurt too often when I ran with this condition but now it does hurt.  My walking isn't that great most of the time either. I had a hard time pushing off on the right leg most of the run although I think the second loop was better.  Between that and the crappy training, it didn't help my speed. I think I left my speed into last year since running hasn't gone well since December.  Probably when my last shot wore off.

I didn't expect to finish so I am happy to finish and also to have finished all the races since Sept 2009 when my bulging disc problem started.  It is hard to say if running is bad for this condition or not.  Doctors say exercise is good but running may not be good for the spine.  After surgery, I am just going to see how it goes.  My doctor says can't run for 6 weeks and need to take off work for at least 2 weeks, lie around all day, walk a bit, and recover.  Hopefully, I feel good again and will want to run.  I will do what I can to reduce the pounding.  The desire is there to run again, but I don't want to continue in living every day in this much pain if there is a chance surgery will help get rid of the pain.  I want to recover and get back into shape and hopefully that includes running.  If not, I will figure out a new plan. 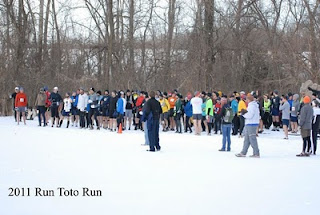 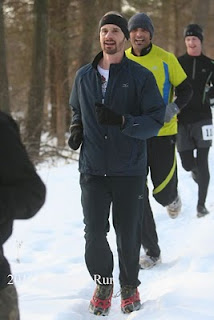 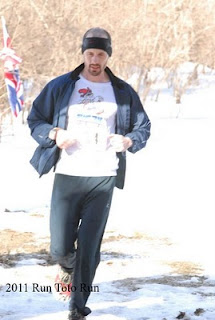 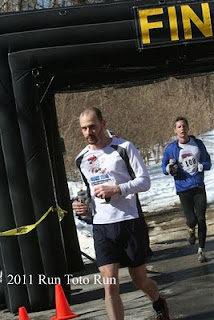 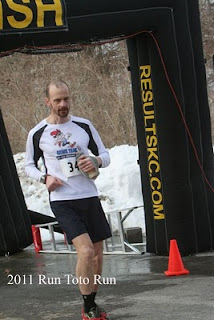 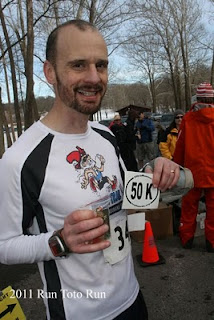 I ran the 10 miler and was just looking around to see how the race went for others. Great report and congratulations!

Good luck on the surgery and don't rush the recovery! I had surgery for L4/L5 and L5/S1 almost 12 years ago and am happy I did. I'd say I'm usually around 95% of "normal". I know everyone is different, but running has been just fine for me since then. I have more problems when doing other activities (volleyball, softball, etc.) that involve more twisting and bending than with running. Just took some time to get to that point...felt for awhile like I'd never get back to normal.

Hope all goes well for you!

Thanks for the comment! I'd be happy with 95%! Great to hear running has been fine and I will try not to rush the recovery. It is going to be hard for me to lie around, but I will do it if that is what it takes.

I also ran the 10 miler on Saturday, and found your blog through the updated PsychoWyco RunTotoRun event section. You get lotsa props for doing what you did this weekend. Hope the surgery and recovery go well for you!

Great going, Andy. I feel like such a crybaby whining about my 34 degree start in New Orleans. I would take you 50K time over mine any day. I see you are going to opt for surgery. Take care but I'm sure Hugh will make sure you stay put and not try anything too crazy too soon.

Hello Andy! Great job at Psycho this year. I was just poking around thinking about running it in 2012 when I found your race report. In your first picture? That's me in the background. Behind Farhad. This was my first Ultra and I remember running with you and I think all three of us took the wrong path on the first loop. Dang I was pissed! Have a great finish to 2011 and maybe I'll see you at Psycho in Feb!

I remember exactly where some runners went the wrong way! I had some other friends that did so. Lucky, I did not. It has been a good year. I won't be able to run it this year since I have another event that weekend, but hope to see you out there at some event again. I ran the summer version of this race in July which had a different course.

Nice! I've heard horror stories about the summer version's heat and humidity! Guess we just jumped in behind you below the dam on the first lap. I've really enjoyed reading your incredible race reports. I'm thinking of either try to BQ or run my first 50 next year. Or both! I'm seriously considering the Berryman 50 for my first 50. With my eyes set on possibly running a 100 in the near future.

The Berryman is an excellent event! I am planning to go run the 50 mile next year. I won't make it to the winter Psycho this year. Good luck with your training!