If you could care less about this blog and want race results:
Race Results


Today was the 51st annual Heart of America Marathon. This is going to be a short report this year. #7 HOA is complete. Temp was about 68 F at the start with 60% humidity and a bit windy. 10 F cooler would have been better but wasn't bad with the wind. Over 250 runners this year so one of the best turnouts for this race. We used to have around 130 - 140 and last year was the 50th so there were over 300. It was great to see a good crowd. Also, we had chip timing for the first time in the history of the race.

I started off with Andy S. I took water at the first aid station and was glad I did since the second one wasn't ready. I had 5 gels and planned to take one about ever 5 miles and had an extra. Also had some Succeed caps and took one at an hour. Not much really happened as the crowd was pretty sparse up where I was running. Talked to Tom W. for awhile. He mentioned at some point he thought a guy had been hit on his bike and turned out that was the case. I didn't see it happen and not sure if I saw the guy, but he was okay. Ran up the first hill with Tom the fastest I have ever run that mile of the race in 7:08. Maybe not a good thing? Then caught back up to Andy. We both did some walking on Easley Hill, mile 13. This is the first time I have tried it during the race and ended up being a little faster than last year even with the walking They called our time at 1:30:22 at the half so just about 20 sec slower than I was last year.

I didn't feel that I had a sub-3 in my today so goal at this point was 3:05 or less. About mile 14, Andy had pulled ahead and Shawn & Karen gave us water. I really needed it. The second water station wasn't ready, I missed the one at the bottom of Easley, and the one at the top, wasn't much water in my cup so I was needing it! I poured the extra over my neck and I felt like it gave me a boost.

Tom W. passed me before Pierpont and just cruised right past me. I wish I could have joined him but didn't have that gear today. At Pierpont, Tom M. handed me water. He had been in the lead, but didn't want to push it due to his recent glute muscle issue so called it a long run.

On the hill before Rock Bridge Elementary, mile 20, I was moving pretty slow so walked a couple times but still had a decent split. This hill just comes at the worst time. There was a guy close behind me. Next mile I did slow a bit since over 7 min at 7:09. I like to keep miles other than the hills under 7 on this course. The last 4 I just didn't have enough left to push too hard. Guy behind me went around me at 24 miles and my last 2 miles were 7:30 and 7:22 so gave up just a little. I don't think anyone else was close behind. Maybe could have pushed that a bit but just wasn't motivated today.

More crowds on Broadway so picked up the pace a bit. Finished in 3:02:58 which is a great time for this difficult course. No course record for me this year but my second fastest time, 2:35 slower than last year. Considering, I never felt great, I had a good run and legs felt strong and a solid pace most of the way. Just didn't have the speed needed to go under 3 and lacked the motivation to try pushing any harder than I pushed the entire race for the last 4 miles. Last 2 miles slowed down, but not horrible. Need to do more hill repeats next time. I am thinking next year, due to my race schedule, I will may have to run it easy and then see what I can do in 2012.

To be honest, I wasn't that excited about running a marathon today, but I am glad I did it. I never had a point at the beginning of the marathon where I am trying to reign in the pace. I had to push to get the pace. I didn't feel beat up after the race so I do think my legs are in good shape. This is a good marathon and everyone is so nice to come out and cheer us on. I ended up 6th overall and the 2nd place award in my age group even though I was 3rd since there was a master's category. Didn't think I had a chance this year due to the great competition, but Tom M. called it a day so that put me ahead one more place.

My splits from Previous HOAs are here
I like to compare each year, but this year the miles were off a little more than last year so not exact. 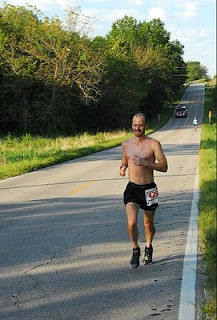 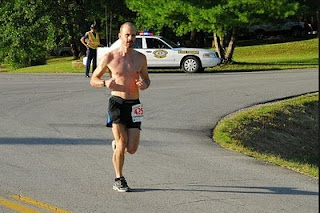 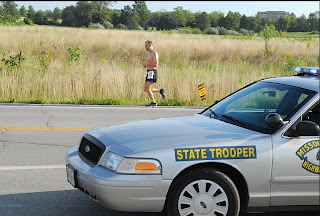 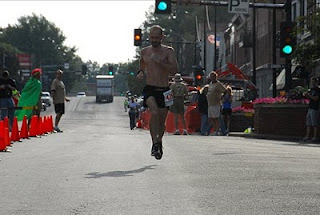 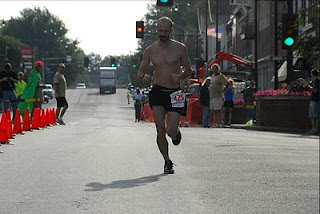 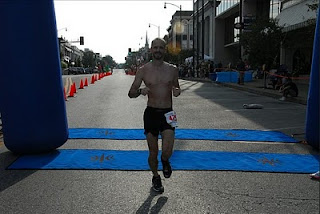