Sat- Jay Dix Challenge to Cure 5K
The weather forecast predicted snow on Sat morning but we woke up to rain and 37F. I woke up with some slight lower back pain, sore shoulders, and legs a little sore. We arrived at the Jay Dix Challenge to Cure headquarters at about 8 am. We had already picked up our race packets on Friday so had to pick up our timing chip. We then ran the 5K course once and my legs and back felt better. The course was new this year. Last year the course was a loop but this course was sort of an out and back/loop combo. There was also a 10K and they had to go out further and run on part of the MKT trail. Due to the rain, the 10K course had to be altered slightly due to flooding in one of the creeks.

We arrived back at the start line about 8:40 and removed some clothes and then huddled inside the tent until the start. Fortunately, they had heaters and with all of the people we stayed warm. People were still picking up timing chips at 9 am so they delayed the start. This seems to happen every year so I think maybe they need to make it clear to get to the race before 8:30 to pick up the chip. At 9:15 we lined up for the start and it was still raining. Since I was running the 5K, I got in the very front row and we took off.

We had to turn a corner shortly after the start and run on the sidewalk instead of the street. It was a little awkward but managed to get out in the lead so I was out of the crowd. One guy running the 5K immediately was in the lead and then there were me and 2 other guys close together on the sidewalk. There wasn’t a lot of room at this point and I felt like I wanted to pass one of the guys, but it was a little crowded. I looked down at my watch and my pace was 5:18 so I stayed behind them until we were back in the street and then passed them both.

Since I started off so fast, the first mile really went quickly and my split was 5:40. Shortly after this point, 3 guys running the 10K passed all of us, but they had to go to the right and the 5Kers went to the left. I predicted one of them would win the 10K, but wasn’t sure which one since all 3 are great runners and triathletes. I reached the 5K turn around and then got to see some of the other runners on the way back. At this point, we were running the same course and a lot of runners were coming at us. It was a little difficult to decide where to run, but finally managed to cross through the pack coming at us and get to the left of the cones. Then we reached the tunnel that goes under the road and one of the 5K runners, Tony, is right behind me at this point and follows. I go under the right side as before just as someone yells to go left, but it was too late. There weren’t any runners under the tunnel at this point and we stayed to the left.

Tony then passes me right at 2 miles and someone says to him he is in 2nd place. My 2 mile split was 6:19. I stay behind him as long as I can and then he gradually pulls ahead of me. At this point, legs are feeling a little dead and there is a slight incline to go up. Then we reach a point where it goes downhill and I regain my speed to about a 6:05 pace. At this point, I’m thinking I can’t let anyone pass me since I am so close to finishing and in 3rd place. I can’t see the guy behind me so wasn’t too worried about him passing me, but I picked up the pace the last 0.3 miles and ran as hard as I could. My third mile was 6:14 and the last 0.1 was 43 sec.

Total time was 18:56. However, the clock said 18:40 something so I thought maybe the chip may have started somewhere ahead of the starting line, but didn’t see a mat. Last year they actually had a starting mat, but I don’t think there was one so I’m not sure why the clock was off. My official time in the results was 18:56 as well. The winning time was 16:35 and Tony’s time was 18:30. The guy behind me was 19:12 so kind of close.

My time is my 3rd fastest 5K so a little disappointed that it wasn’t a PR, but definitely a good race for me. I’m not going to say I started too fast since my overall time was good. I’m thinking about using the same strategy the next time I run a 5K and running the 1st mile really fast. It hurts my time on the last 2 miles, but overall it seems to be to my advantage since I rarely break 19 min.

This is a great event, but I didn’t like the new course. I felt it was confusing and the volunteers were telling us to run on the sidewalks in places and it was difficult to hear them due to the rain. Also, it was very awkward running against the other runners after the turn around since we were running through a parking lot. I heard from one runner that she thought the 10K was short. She said her time was faster than last year and the course was harder since there were 2 hills. Looking at the overall times, I would say I agree with her since some of the top runners were 2 min faster this year. However they had to change the course that morning due to the flooding. Hopefully, next year they will be prepared for an alternate course since this area floods often or maybe they will go back to the old course that was one loop for the 5K and 2 loops for the 10K.

I placed 3rd overall of 203 runners and received the medal for first in my age group 35 – 39 although the overall winner was in my age group. They didn’t give anything for 2nd and 3rd overall this year so only the age group awards. Hugh placed 22nd overall and 2nd in his age group of 45 – 49 with a time of 22:37. I noticed when he crossed the finish the clock said 22:23 so it was definitely off from the chips. There were 109 runners in the 10K. The results are posted on the Columbia Multisport Club web site at the moment instead of the race web site.

We ran the 5K course again and then enjoyed the post race meal of hamburgers, cole slaw, potato salad, baked beans, and cookies. 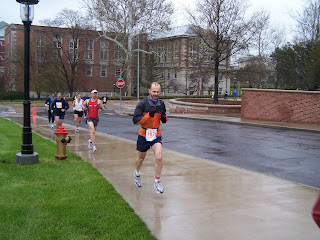 Above - Andy Below - Hugh 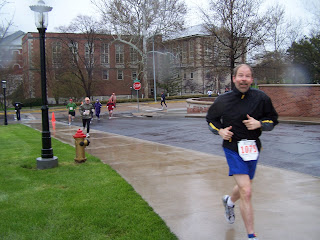 Sun- Rock Bridge State Park, 24.2 mi, 3:50:31, 9:32/mi
I had considered getting up early to do this run but would have started in the dark. Also, I didn’t sleep very well and back still hurt so stayed in bad and eventually got some decent rest until I got up at 9:30. I remembered the St. Louis Marathon was today so had to go see if any results were posted yet. The half results were up, but nothing for the full at that point.

We went to church and then lunch. I checked the results again and found that a running friend had finally qualified for Boston. He had nearly missed it last fall, but ran a 3:13 today. I arrived at the park about 2:30 pm and the plan was to run 3 loops which is 8 mi per loop with a short out and back on one part. Temp was near 60F which was quite a change from Saturday and the sun was shining. I was hoping I would have a decent pace this week since I only ran 14 miles last Sunday. I felt strong but due to all of the rain the trail was pretty muddy. At one point I caught my left shoe in my right shoe string and fell on my left hand/left buttock, but didn’t fall very hard. My hand was muddy and a couple small cuts from some sharp rocks. I washed off in the next clear stream and was fine. The first 8 miles I ran in 1:14:03 which includes a short water and took a banana Hammer Gel. This was a sample from the race packet yesterday and it was pretty good.

I still felt good on the second 8 miles and ran in 1:17:49 with bathroom break, water break, and a Power Bar Gel, Plain Energy Flavor. This was another sample that I received recently and I liked it even better than the banana Hammer Gel. I would say today that it may be the best gel I have tasted since it had very little taste.

Took off feeling pretty strong for the 3rd loop. Took a short bathroom break at some point. I really tried to push myself a little on this 3rd loop since I figured I would probably slow down. At about 21 miles, my legs were hurting pretty much all over, but it was good pain. I still pushed, but took it a little easier on the downhills and pushed harder on the uphills and flat areas. The last 8 miles ran in 1:18:37.

I’m happy with this run. I felt like I could have kept running a few more miles and my back no longer hurts. Originally when I decided to run the Berryman Trail marathon, I was thinking 4:30 or less. Since then, I have been thinking 3:40 is a reasonable goal. I don’t really know for sure how the race trail compares to the one I’ve been training, but have heard it isn’t as bad, but does have some long inclines. The one I am training on has some pretty steep inclines.

What? No picture of the hard-won hardware?

Good race Andy. Your getting strong and even faster. Wish I was!

OK, your first mile was my mile PR from high school, and last night I ran a mile race for fun (yeah, some fun!) and my time was 6:19...and I was ready to die...now I can better appreciate what it takes to get those fast 5Ks though!