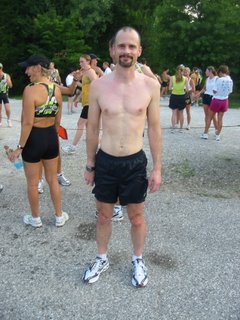 Fri-Rest, planned a run but decided to rest after another extremely busy work week.

Smokin’ Chicks 5K-Temps were a little more reasonable than the 5K last Friday, but still about 82. This was the second year for this race and the first time I have run it. I started out a little fast for the temps. There were 88 runners and seemed like a big pack at the front. Seemed like a lot of fast runners. My first mile split was 6:03. The second mile had a hill where we turned around and I was feeling it. Second mile split was 6:47. 3rd mile split was a little faster at 6:39, and the last 0.1 was 42 seconds. Overall 20:11, 6:31/mi and placed 12th. Most of the age groups were 10 years. The overall winner was the same age group as me. Since they gave overall awards, he was dropped from my age group rankings, and I got the bronze medal.

Hugh ran this race too, but didn’t place in his age group. He did have a good time though. Smokin’ Chicks offered the runners a BBQ buffet for $6 and we took advantage of that before leaving about 9:30 pm.

Sun-I decided last week that I would go ahead and compete in the Show-Me Games Duathlon if I felt okay on Sunday morning. I had everything ready to go on Friday night. I didn’t preregister so I arrived about 6:40 for the race which started at 8 am. The Triathlon also took place at the same time.

I was a little concerned about the start with all the bikes together and not spread out, but we spread out pretty quickly. The nice thing about not having to run first is that a bunch of bikes didn’t pass me later. This is the hilliest course that I have ever raced. It went down to the Missouri River bottoms and there were hills on the way down and of course on the way back.

I passed back and forth a couple cyclists and was able to pretty much maintain my position the entire portion of the bike course although I was passed by a few of the fast people from the triathlon competing either as individuals or a team. I kept a good pace and averaged 18.4 mph (1:08 for 20.9 miles and transition about 1.5 min) which is a little faster than my last duathlon and this course was 6 miles longer and hillier. Due to my severe lack of training on the bike recently, plus a 5K the night before, I was pretty happy. I used the aero bars on the flats and felt pretty comfortable. I was not prepared for the hills but I think I have improved a little even without biking. Maybe running on all those hills helps? I think training on hills in the future will allow me to have some significant improvement in my average speed. I would also like to invest in some different wheels at some point. I’m just not sure what to get.

The 5K run course was on the MKT trail so it was completely flat. I was definitely feeling that bike race for about the first ½ mile of the run. Once I relaxed, I was passing lots of runners, the ones I couldn’t pass on the bike. I didn’t count but may have passed about 10 runners. I’m sure some were from the triathlon, but I wasn’t paying attention to how they were marked. I finished the run in 21:48 (7:02/mi). Overall time was 1:31:19 and I placed 2nd in my age group 35 – 39. The overall winner of the duathlon was in my age group with a time of 1:16. However there were no overall awards so he wasn’t dropped out of my age group. I’m looking forward to seeing the results in a couple days to see how many competed and how I placed overall.

After lunch, I decided to go ahead and do the 14 mile run I had planned for today since I was feeling pretty good. 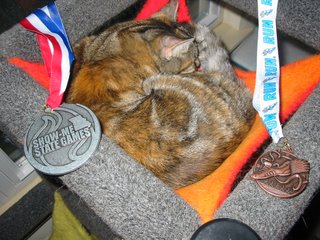 The Hardware (and Nisa)

Great races and especially with no taper. That 5K sounded tough and glad you picked up some hardware.

Ah Hugh, you make me laugh!!

You know, at my marathon, I actually thought maybe I'd be bumped up to 2nd as they had overall awards and the overall winner was in my age group, but to no avail...