Tues-Riley Bonk Bonanza Short Course, 4.0 mi, 43:00, 10:45/mi; Once again, legs felt sluggish so I decided to run the shortest course. I tried a few sprints and it felt okay, but legs wanted to go slow.

This was the second duathlon that I have done and I don't really know what I'm doing yet. I signed up for the long course which was supposed to be a 3 mi run/15 mi bike/3 mi run, but the run course was short.

I went out pretty fast on the run and my Triax was behaving erratically for pace so I stayed behind the guys that I know are faster than me. I wasn't sure what to expect with my pace, but
everything felt good. Transition to bike went smoothly although I felt l didn't get a fast start since lots of bikes were passing me.

The bike course was 2 laps and I lost count of how many people passed me. I was in 18th place after the first run and ended up a lot worse. I passed very few people on the bike. I'm still new at this and way undertrained on the bike so I know it is to be expected. Transition to run went okay, and legs felt funky for the first few minutes.

I enjoyed this last run the most. It meant the race was about over and I found myself catching up to runners and passing them like they were standing still even though I didn't feel my pace was very fast. They may be better on the bike, but I ruled on the run. Lots of other
CMC members were encouraging as I would see them before or after the run turn around. I passed quite a few runners during the entire run and they made no attempt to stay with me. I did find my pace increasing later into the run as my legs got used to not being on the bike. I think I could have run faster, but didn't push it since I was still passing people. During the second run, I felt like my right calf was about to cramp. It was a little sore after I finished.

There's definitely lots of room for improvement on the bike, but I'm pleased considering the few miles I've done this year. I've biked 186 miles total and 133 miles between March 27th and April 8th. I was either about the same amount behind some of the people I competed against last fall or closer to some. My speed on the bike was a little slower than the course last fall, but this was a hillier course. I'm way slow on the hills. I got aerobars last week, but did not use them for this race.

After the race, there was pizza, but it did not sound good for about 30 minutes. Hugh stopped by and he had run two 5Ks. At 9 am, he ran the Tim Heinsz Memorial 5K and at 10 am he ran the Show-Me Stampede 5K. There was another 5K at 11, but he did not run. I think he placed in the top 10 for the first race, but we aren't sure about age group yet. In the Stampede, he placed 1st in his age group.

I had planned 36 miles but cut a couple runs short. 27 miles this week. 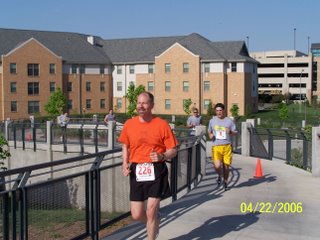 You done good buddy. I only wish I could run like you. The bike is just for fun. ;)

Congrats to Hugh too!

Congrats on the duathlon finish! You're right, lots of room for improvement on the bike. It's just something that comes with time spent in the saddle, which you don't have a lot of...but for now you RULE on the run! Nice job.