I needed a long run today while traveling so decided that I might as well do a race so I wouldn't get lost. Also, this gave me a chance to run an ultramarathon in another state. I ran Rock Bridge Revenge 50K last week and the major aches were gone by Saturday. I decided to do the Defiance 50K in Tacoma, WA since it was the right distance had not filled. The course is 3 loops through Defiance Pointe Park. The trails for this race were pretty smooth and the race course had a lot of turns but a beautiful course.

The weather forecast was 100% chance of rain. It rained on the drive there from Portland but was not raining at the start. Temperature was low 60s. All three distances, 15K, 30K, and 50K started together. The course was chip-timed. Very few people lined up in front so I got close but once we started I was passed by a lot of people. We ran along the waterfront on a paved path above the beach for a half mile before going up some stairs. Then we hit the trails which were advertised as single-track but most of it was not like any single track I’ve run in Missouri. There was plenty of room to pass, a pretty solid surface even though wet, and some mulch and pine needles. There were very few rocks and roots.

The first loop I had plenty of people to follow and seemed like a lot of turns so I had to pay careful attention to the course markings which I would describe as average. I had to look ahead and there were volunteers at many of the turns and roads since the course crossed over where we had run before at different points. Not long into the first loop it started to rain and it rained hard. I was expecting more of a drizzle. My shorts and shirt were completely soaked and the trail started to accumulate lots of puddles that could not be avoided. I didn’t bring Body Glide but my feet were fine. Nips were a little sore by the end. It felt a little too cool to run shirtless and I didn’t see anyone running without a shirt. Before the end of the loop, we had to rappel down a steep, wet and muddy hill. There were 2 different ropes since it switched directions. Then there was just a short run to the finish of the loop. I ran the first loop in 1:34:27. My first loop came out to 10.3 miles on my GPS but my other loops were slightly shorter even though the same course.

For nutrition I had 3 bottles of Sword and 5 gels. I had a full bottle of Sword for each loop at the start finish area to save time. Prerace nutrition was not ideal since I didn’t have access to the foods I normally eat so I was hoping I wouldn’t have any issues. None of the food other than bananas looked appealing at the aid stations but I didn’t take any since they were all whole and not cut up. My energy level stayed good and the rain became lighter in the second loop. Another 50K runner caught up to me and was running his first ultra. He had finished the first loop just a few seconds behind me. Eventually, he ran ahead of me the second loop but I caught him later and we finished the second loop together with my loop split at 1:37:22. I was surprised since I expected it to be a bit slower than just 3 minutes.

I took off on the 3rd loop and pushed the pace as much as I could. Along the path to the stairs some walkers pointed out a humpback whale and a seal. I’m not sure if it was a seal but there was definitely a whale. The whale came up for air several times as I was running past. I passed a 50K runner before reaching the steps. I had been running the gradual uphills and walking the really steep sections in the previous loops. On the 3rd loop I was just a little slower going up but really pushed on the flat and downhills. Overall the course was very smooth, runnable, and fast. I didn’t see many runners during the 3rd loop although I passed some from the 30K and lapped a few doing the 50K. I had a guy running at me at some point that was questioning the direction he was going. Although it wasn’t marked very well I assured him it was the right way. He was a 50K runner and the only other one I passed. Once I passed him I pushed the pace even more until the end. I ran the final loop in 1:38:01, only 39 seconds slower than the previous loop. 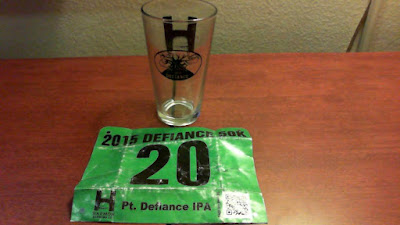