I registered for this marathon last December since I figured I would want to keep up my streak of running it 9 times in a row. I was not that excited about running it and no clue really where to pace myself. I was thinking somewhere between 3:10 and 3:30 with closer to 3:30 being more realistic. I've not been feeling as fast as I used to run and really didn't train to run a marathon since I ran 100 miles about 5 weeks ago. Also, I've been trying to gain weight and was up 10 lbs from last year's HOA.

Temperature was 72F and humidity 96% which is pretty typical for this marathon. I positioned myself back from the front and took 3 seconds to cross the timing mat. Talked to the guy running in the suit (trying to break a world record - he didn't). He eventually went ahead and then I passed him at around 3 miles. 7:30 - 7:40 pace was feeling good and I didn't feel like I could go any faster. A guy caught up to me around mile 8 and I ran with him until the bottom of Easley hill around mile 12. We also ran a bit with another guy that caught us at mile 11. They called out my time at the half at 1:40:30 so I decided my goal was 3:21 or less at this point since I was feeling pretty good.

I didn't see the first guy again, but the other guy ran behind me for a few miles and then slowed down. I passed 8 people in the second half and was passed by no one. The sun was shining and humid, but didn't feel too bad to me. I passed 2 guys in the final mile which I ran in 7:20 so finished strong. Even though I finished feeling strong in 3:20:27 this was my slowest HOA for the 9 years. The first year I ran in 3:18:59. Placed 10th out of 212 and 3rd out of 18 in my age group. The first 4 in my age group were very close. I ran the last half ran in 1:39:57 so a negative split. I do hope to run again next year and see if I can take 10 minutes off my time.

After we attended the pizza party and awards ceremony at Shakespeare's Pizza and then went home to nap. 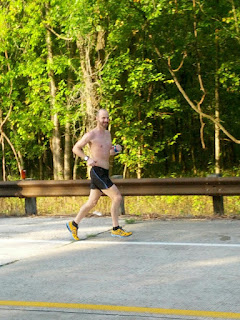 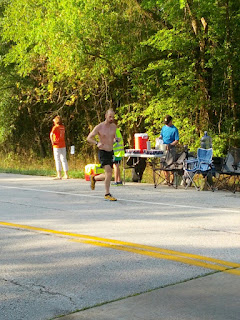 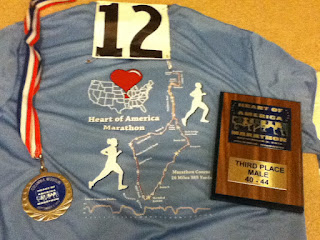 Nice work! I had a bad ankly injury just two weeks before the race so between that and the blister I didn't run as strongly as I was hoping to. But I had fun nonetheless. Nice seeing you at the finish!

Thanks! Looks like it went much better for you than 2 years ago. That is quite the improvement!