Arrived in Tulsa on Friday picked up my packet for the Post Oak Challenge Double, checked out another running store and then checked into my hotel.  It was very challenging getting around Tulsa since there is so much road construction.  GPS said to take exits and streets that I could not take and traffic was horrible.  I ate at an Incredible's Pizza buffet that was 4 miles down the street so no chance of getting lost.  Even though I am following Primal Blueprint (lower carbs), I wasn't going to sacrifice carbs before this race so really enjoyed myself at the buffet, eating about 10 pieces of pizza, lasagna, spaghetti, pasta salad, chocolate chip cookies, apple pie, and ice cream.  Totally skipped the veggies and lettuce salad.

Other than a couple wrong turns race day went very well. There was an early start at 7 am and then the main start was at 8 am. It was around 28 degrees when I arrived and since there is so much road construction in Tulsa it was good I had my GPS since I had to go off route and then get back on but made it there just as the early starters took off. They didn't give us our chip yesterday so picked that up and had a cup of coffee, relaxed inside, and used the bathroom a couple times. I used the last time about 10 min before the start and there was no one using the outside bathrooms. We took off and found myself running with 3 other guys. We introduced ourselves and talked about our goal times. I really didn't have one since I didn't know what this course would be like. We ended up not staying together but one of them stayed with me. The first wrong turn was totally my fault and I took him with me. There was a sign pointing right but I was thinking it was up ahead a little further. The course was marked with 3 colors of flags (10K, 50K and 25K and marathon - which is tomorrow), The first wrong turn added maybe 0.1 mi to the course. We ran in a compact area so a lot of the trails they had us running on were very close. They had yellow tape on the ground that we were to not cross.

I ran quite a bit with the guy that took the wrong turn with me. He is training for Comrades Ultramarathon in South Africa and is in his 20s. I decided to run with my water bottle even though the aid stations were frequent. I have not been using any nutrition during my training lately but planned to use Succeed and Accel gels for the race. The guy I was running with used the bathroom at an aid station and said he would catch me later. I caught up to some funny guys with British accents. I didn't think I was following them although I was catching them and this is where the second wrong turn happened. I am not sure how we missed the turn but probably added another 0.3 mi. There should have been yellow tape in the wrong direction here but there was not.

The course was quite rocky and parts reminded me of Flatrock in Kansas with the rocks sticking up out of the ground. Some in the woods and some in grass and in the open but pretty much single track most places. We had to run a few places that had some gravel. Three hills stood out to me on the course. The first reminded me of the hills at Kettle Moraine where it was a wide path and went up abruptly. I walked it. The second one was a butte. I walked but the guy I was with wanted to get it over with so he ran it. When I got to the top you could see all around for miles. I caught him soon as I descended. The last hill was the hill from hell and it just was a long ascent of several hills that never seemed to end. and we ended up finishing the first loop together. Another guy I had been running with came in shortly after and decided to call it a day due to his foot. I had 16.3 miles on the first loop with the extra 0.4 so either way the course was going to be long. Some parts were very runnable and it really didn't get tough until the last 5 miles of the loop.

I got rid of one shirt since it had warmed up, ate a banana, refilled my bottle with Succeed and picked up more gels. I wasted about 5 minutes before taking off and didn't see where the guy I had crossed the line went so took off on my own. Time was 2:37 when I took off. The second loop I ran all by myself and didn't miss any turns. I passed 4 people that I know of. My time at 26.2 was around 4:17. After I was descending the butte on the second loop I saw the guy I had been running with earlier over on another trail. I thought he was a few minutes ahead. Somewhere along the way he said he used the bathroom and that is where I must have passed him since I finished ahead of him.

I felt like I finished strong with lots left in the tank so hopefully that is a good sign for tomorrow. I have never felt so good at the end of a 50K. Even sprinted the last 0.2 miles at 7:39 pace. Time was 5:21:34 so ran the second loop 7 min slower although with the time I stopped between loops actually running was probably about 3 min slower. I ran 32.2 miles since the second loop was shorter without wrong turns and had a 10 min flat pace. I placed 9th overall and not everyone had finished when I left but I think there were close to 100 that had signed up. There were 10 year age groups and I placed 3rd in the 40 - 49 so got a special award. The medal I got is a huge piece of metal. They had some food afterwards and the 50Kers could get 2 meals. I have my second meal to a 25Ker that was still hungry since I couldn't eat that much yet. We could also get up to 4 drinks and they had soda, water, and beer. There was also a beer stop before the hill from hell. Temperature at the end was 61 so warmed up just a bit!

At packet pickup we got a nice shirt and it has the 2 races on the sleeve that I am running. Also got a bright yellow running hat that says Hill From Hell Double Survivor, a Koozie and a cup. The course was kind of nuts with all the trails running so close together, but I think they did a really good job. I saw several guys that were at the Pumpkin Holler Hunnerd (in Talequah OK) that were either running or working an aid station.

Tomorrow I run the marathon which is on some of the same trails, some different, and some road.

Course Map and Elevation from my GPS - This course kind of made me dizzy at first with all the turns.
Splits from GPS 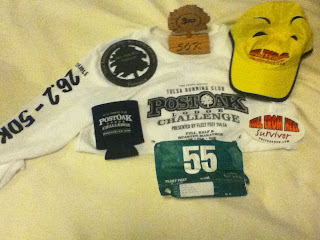