We drove to St. Louis on Saturday and went to the expo to pick up our packets.. We spent some time there and then headed to the hotel. Hugh discovered they had given him a small shirt instead of the medium he had requested. On the way to dinner we went back and exchanged the shirt. We had dinner at Incredible's Pizza buffet and it was awesome as usual. Only catch was we had to eat in 45 min since they were closing for a private party at 7 pm. Back to the room, got our stuff ready, and to sleep about 10 pm. I was awake around 3 and then fell back asleep and rudely awakened from a deep sleep by the alarm at 4:50.

I followed my usual pre-race routine with shake, shower, and we left around 6 am to head to the start. By the time we got there, we needed a bathroom and the lines were too long so we looked around for other options. We found a hotel and headed inside. The men's room had the shortest line and they pushed us to the front since the line was for stalls. We had about 15 minutes to get back to the corrals. I had to jump the fence to get in as they were playing the anthem. I found Katie, Ryan, Tom and Angie and we were all running the marathon. We were right behind the start line. Tony R. was behind us running the half.

Angie was attempting a 6:45 pace which is about the pace I was hoping for myself so when we took off I attempted to stay with Angie and Tom. Dan E. soon surprised me and then Andy S. was also running beside us. We kept Angie and Tom in our sights but it seemed like they were going to run a little faster than I felt like running. Andy S. eventually went ahead of all of us and looked really strong. I ran with Dan and lost him once after a water station and then he was back. A priest sprinkled holy water on us at one point and around mile 7 I heard someone yell "Go Andy" around mile 7 and told Dan probably for another Andy and Sunny told me that she yelled when she was at mile 2 since we were passing in opposite directions at that point.  Around 10 miles we lost each other again and he told me later he couldn't keep the pace. Normally, he could since he was pulling me on training runs but he has been dealing with some injury issues and hasn't been able to train as much in the past several weeks. But he was doing great just to be running today.

I was pretty close to my pace for the first 10 miles (all sub 7) but mile 11 which is after I lost Dan, I ran 7:05. This is all a coincidence since I was not feeling great was wondering how much longer I was going to be able to keep up the pace we were running. I felt like my breathing was harder than it should be and just didn't feel well. I had that tight feeling I got during St. Pat's just below my chest. I was taking water at every station and getting my gels. I felt a little better after each gel.

By mile 13.1, I was around 1:30 so had fallen off pace. I am kind of fuzzy on some details today, somewhere around here I was running with a guy that asked if I had a running blog. He had checked it out and said he found it inspiring. The mile I ran with him felt better but then I just could not keep it up. Miles 11 – 14 were all under sub 7:30. I realized back at mile 10 that today would not be a PR and maybe a better goal would be just to beat my Boston Qualifying time of 3:20. I felt like I could probably keep an 8 min pace. Although any slight hill quickly put on the brakes for my pace. I would get back on pace though on flats and downhills.

At times, I honestly felt like walking. The thought of quitting crossed my mind, but knew I could finish and decided I didn't care my time. My gels started to almost come back up at points. I kind of just felt like I was coming down with something. May have been deficient in electrolytes since it was getting warm. I am not sure the temp but felt like it was in the 70s. I used all the water stations. I was passed somewhere around mile 20 I think by Dane, the guy getting signatures for his book at the expo.

Pace the rest of the way was around 8 min, some a little less and some more. About 2+miles to the end a guy starts running with me. I don't know if he was looking for some encouragement or what but we seemed to make a pact to get each other to the end. We were both off our normal pace and feeling bad. There was a small hill and that about stopped us, but we got to going a bit faster on the downhill. There were half marathoners walking on one side of the road and we could see a flag up ahead. However, that was not the finish. It was around another corner. We were running downhill and he didn't know if he could keep it up, but I said I wasn't going to run any faster. I was spent too and just no energy. Legs didn't hurt at all though. Just that feeling that I really don't want to do this anymore. We made it to the end. I really appreciated the support the last couple miles.

I saw Ryan still in the finish area and he was looking for Katie. I went to sit in the grass outside the fence and forced myself to eat some of the finish line food. Eventually Katie come through and then Dan who joined me in the grass for a few minutes. He seemed to be doing great and was glad he ran it. I continued to wait for Hugh and figured he would be later than expected too. He finished in 4:25 and walked a lot of the last 3 miles. He even had shut off his Garmin at mile 23 and decided he was done. Then started a new run for the last 3 miles.

We walked back to the hotel. On the way back a gang of kids asked us something about our numbers and we said we had run a marathon. One asked something about what was in our bag and I said food. Hugh had made a bag out of the mylar blanket to carry the food. We kept walking and they asked if we had change for a $50. Sorry, no we don't and then we were pummeled with a clod of dirt and then fresh pineapple. Hugh says we were victims of a walk-by fruiting. I guess we were lucky they were just a bunch of bored kids and didn't try anything more. I think I could have outrun them, but Hugh was having problems finding the energy to walk.

Lunch was at Cheesecake Factory at the Galleria and we had cheesecake for dessert. Service was excellent and at least ended the part in St. Louis on a positive note. Then we drove back to Columbia and I have never been so happy to be home. The temp got up to 82 today. I suppose the heat was a factor, and everyone deals with it differently. I don't think it was my only problem today. I am not sure why I ran about 20 min slower than planned but I am happy to have finished marathon 22. Overall, I am now at 32 including ultras. No more marathons until HOA and 2 weeks until my first 100K. 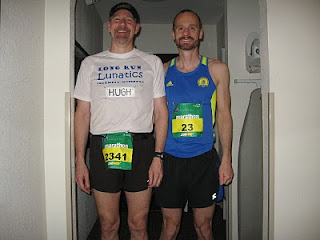 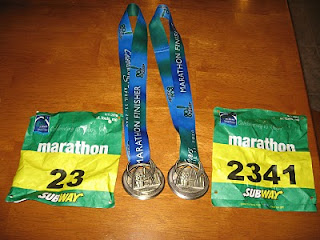 Andy - that was me you came across around the half-way point. It was good to share some mileage with you! Good luck at the 100k. I look forward to reading about it.